My Gaming Past – Trying to Relive Baldur’s Gate 2, or, How BioWare Owns My Wallet

A couple weeks back, I talked about my gaming past in terms of strategy – my love of building decks, armies, and characters leading to my choice of games. There’s one game that especially gave me a world where I not only got to create my character, I got to pause the game to strategize and control what happens, and got to make choices that influenced the game that I ended up playing. 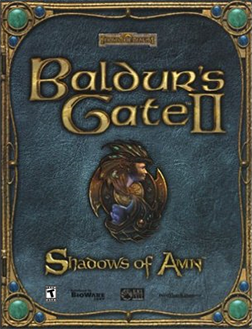 That game was Baldur’s Gate 2.

I had played games earlier that similarly had party-based control, even ones where I could pause, choose my party, most of the elements. I guess especially Baldur’s Gate 1.  However, Baldur’s Gate 2 added a couple of excellent things that really pulled me in. Way more classes, for one thing. Excellent cutscenes for the moments out of our control. And what is still probably my favorite video game villain of all time (see him in a video here).

So there are a chain of related games I have played since, trying to live up to this great game. Nostalgia time: here’s some of my gaming past!

Baldur’s Gate and Baldur’s Gate 2 were made by Black Isle Studios and BioWare. Black Isle used the same interface to make Icewind Dale and Icewind Dale 2. Containing all of the same sort of game systems, and following the same D&D rules, but lacking much of the plot work that BioWare brings to a game.

Drawn in by the name, I played Dark Alliance and Dark Alliance 2 on the PlayStation. Again from Black Isle, these games were adventure RPGs, really more Diablo style. I love Diablo, but not a lot of plot going on, or choices. Also, no party – just co-op with one friends – and only three classes. I think I played each game once. Fun, but a once-through.

Back to BioWare games, there was Neverwinter Nights. Neverwinter Nights is my favorite example of a frustrating computer game – and the reason I prefer console gaming. I got Neverwinter Nights right when it came out – and could not get it to run on my computer. Kept trying, kept trying. Finally, in reading the license agreement (I wanted to play that much), I found mention of the minimum resolution – which was higher than the default resolution setting the game had been trying to start with. Why would you set a default lower than the minimum?

So anyway, I prefer console gaming now, to avoid these sorts of problems. Having a Mac doesn’t much help, either, since so many games don’t even play on a Mac.

So I also did not have the Internet when I was playing Neverwinter Nights, and without the Internet, it’s a single-person, no party game. This made a lot of the parts of the game really hard, because it was built for you to have some help. You can have a single henchman, and as a wizard you got a familiar, so I tended to play a wizard and have my pseudo-three-person party to handle situations. I kept trying other combinations, and not doing so well. The replay on that game was definitely not in the single player campaign.

From there, I spent a good amount of time, once I had the Internet, playing MMOs – which I talked about in previous post. However, I should mention I played Final Fantasy XI on the Playstation – the PC version would not play on my Intel graphics card, like many other games, and Intel knew and wasn’t going to do anything about it. So I ended up owning both copies of the game.

So, to continue talking about PCs for a moment, I tried to upgrade mine to be able to run Mass Effect. I had seen a friend play it, it was BioWare, it was back to having a party with you, it looked great. It needed a better graphics card than I had.

Instead, I fried my graphics card in trying to switch it out for one that was not actually compatible with my computer. Had to buy a new version of my previous graphics card. It reinforced my belief that PC gaming was not for me – I had terrible luck getting the games to work, I apparently have no skill in working with the hardware, and it’s a pain.

It was Mass Effect that made me want to get an X-Box 360, though. It wasn’t until Final Fantasy XIII was confirmed for the 360, however, that we got one. Holly has recently talked about games that made the 360 worth it as a purchase, but for me, those two alone cinched it.

Mass Effect got back to having a playable single player experience, a story, a good villain, some open-ended decision making in what you do and where you go, tons of dialog options… it was phenomenal. Another high point in this gaming list, it was a great game.

Followed by a great sequel. We got Mass Effect and played it in time to lead straight into playing Mass Effect 2. Here, though the villain and point to the game was a bit more nebulous, the game was otherwise a real treat. Given all of the awards and game of the year and all it’s gotten, you probably know that, either from hearing it or playing it.

I honestly don’t know how I had missed that Dragon Age was by BioWare. I had been dubious about getting it – it made me think it was a Fable type of game, rather than a fantasy Mass Effect. Fable just had not really set up the X-Box as a solid RPG console in my mind; all the good RPGs I had played on my Playstation 2. I had a 360 to play Halo games and Mass Effect.

Yet, lo and behold, here was an RPG that was totally worth it. When I say it’s a fantasy Mass Effect, I mean that far more in the history of this list of games: it was a solid offering from BioWare, that again had a good party, open-ended decision making, villains both broad and specific, a ton of choices of what to do with your classes (especially a mage!), and it’s just a ton of fun.

Dragon Age 2 was harder to get through, and it wasn’t until the end that we got it. However, by the end, it left us super excited for Dragon Age 3. We wrote about our theories for that in one of our earlier posts – I just wonder how much longer we’re going to have to wait for it?

The game we all love to hate. A year on, and still, this game irks me. BioWare I turn to for choices: in my class, in where I go, who I work with, what I say, what I do. However, by 3, we’ve lost most of this. I’m importing my old character, so I don’t really have much of a choice on class. There are side missions, but the plot missions all happen in a very specific order. They are working on fitting in everyone you’ve ever met, so you don’t just get everyone at once at first. And in terms of what you say and do – there is an option for playing the game more cinematically, where the game makes paragon or renegade decisions for you and you just watch them play out. I’m going to let that stand as my point on this matter.

But really, it just lost much of what I turn to a BioWare game for. And  I have a history of working hard, and putting a lot of time and money into BioWare and related games. I’ve even figured out it’s BioWare I liked, and not necessarily Black Isle. So that’s something. Mass Effect 3 did not live up to what had come before.

So this hooked me and had me playing a lot when it first came out. The nostalgia of it was excellent. Also, working in the class options from Baldur’s Gate 2 into Baldur’s Gate 1 was a nice touch. However, these classes were designed to start working around 8th level – about where you start in Baldur’s Gate 2. At level 1, you’re still just one shot away from death.

So I made a number of characters, but am realizing one piece of the puzzle that is Baldur’s Gate 2 that I liked was starting at a slightly higher level. Rather than having to survive until you have some minuscule skills, you start with some skills, and can hold your own when you run into challenges. Or bang your head against them repeatedly, which I also did some of. This is also something that was fun in, say, Mass Effect 2 and 3 – your imported (or new) character starting at higher level. It just also means that to start a new character, I end up going back all the way to Mass Effect.

But for now… I’ve found a missing link in this chain. I don’t know why I never played KotOR before – I played other Star Wars games and liked them, and obviously other BioWare games… is it so wrong to combine these two things? Recently, my sources said no.

On yet another highly informative episode from SourceFed Nerd, they showcased the fact that KotOR is now out on the iPad – for $10. Having both an iPad and $10 (and making space for the over 2GB install size), I promptly made this a reality.

I have only just started, but so far, I am loving the fact that it’s effectively open-license d20 system overlayed on the Star Wars universe. The new iPad controls are working pretty well for me, and it hasn’t bugged out – well, once I figured out the reason I had no sound was because it was sending it to the Apple TV.

And looking at where it should belong in this history, it makes sense. It’s the bridge between Neverwinter Nights and Mass Effect. It’s still using the D&D ruleset as the base, but moving into a different world. What Mass Effect did for them, then, was step away from both having that underlying ruleset – and having a pre-made world. They built both of those as new intellectual properties for Mass Effect. That may be part of why that game is so good – they had learned good game-making while leaning on rulesets and build worlds, so that they could have a solid game and go out on a limb with the system and the world.

Then, they kept going with Dragon Age, and sequels, and… Yeah, if BioWare comes out with another solid intellectual property, I’ll be right there, Mass Effect 3 or no. Because the people who made Baldur’s Gate 2 keep trying to make a game that’s better, and I’ll keep seeing if they’ve pulled it off.

One response to “My Gaming Past – Trying to Relive Baldur’s Gate 2, or, How BioWare Owns My Wallet”