When I played Dragon Age: Origins, I loved it. It was such a unique story and so many choices that you could make that would change the outcome of the final story. Even the initial choice of where you were from had an outcome on how people reacted to you. I played a Female Dwarf Noble Rogue, which meant that when I was in the dwarf area I had different reactions than David who played a Female Elf Mage.

All of these choices made for a unique game and created a lot of replay-ability, because what if you chose the Werewolves over the Elves or the Mages over the Templars? What does that change for the end of the game, and how does that affect the items you might have access to? It functions like a real exchange would because if you piss off a group then they are not going to help you and won’t provide potential resources. So choices you make can have real effects on the game play. 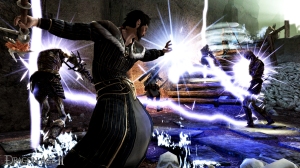 This I think explains a lot of what was hated about Dragon Age II. First of all, you are forced to be Human, even though you can choose Rogue, Mage, Warrior; everyone is the same person and starts in the same place. You are a member of the Hawke family running from the Darkspawn (that you were fighting in the first game). Throughout the game you might make some choices, but none of them are truly significant until the end.

In the third act suddenly everything changes because on the sideline you hear about stirrings with the Mages and Templars of the city. The history of Kirkwall being one of slaves, the chains that bind the city seem to bind it still even though people cannot see it. Fear of being imprisoned – of the unknown – create a powder keg of a situation. The leader is dead and suddenly you have come up the ranks of the city and are even considered a trusted person to many of the high rank officials. So not explaining everything, but basically you choose the Templars or the Mages. During the recap at the end you learn that the decision you make has swept throughout the other lands.

For example, in my game I played a Mage so I chose to free the mages instead of destroying them. At the end of the game it described revolts in multiple Mage Circles, and chaos brewing throughout the land. Suddenly the place I ended up was huge, I was being hunted, and on the run because of what happened in Kirkwall. Throughout my gameplay it took me so long to make it through – because I had a goal for one act, but once that goal was done I did not feel a need or drive to push beyond that. At the end, though, it almost made the rest of the game worth it.

As I said I had trouble getting through the game. I kept having long pauses in between play times and every dungeon is the same, but I loved that the game you are playing is being told by Varric who has been captured some time in the future. You know people are looking for you at the beginning, but you don’t know WHY. I remember thinking after I played the game that part of the problem is that Dragon Age II is really telling a story so that they can tell Dragon Age III.

It might be completely ludicrous, but so much of Dragon Age II sets up a history of a character – one that is being hunted and searched for by so many people, who has caused an incredible shift in the balance between Templars and Mages – that seems to naturally lead in to what you are facing in Dragon Age III.

Dragon Age III, where suddenly you have the Champion and the Grey Warden as forces out in the world, and you come along as another character to fight in the struggle that has brewed in the aftermath of the events of Dragon Age I and II. Not to mention what is happening with Morrigan, who was never brought up in Dragon Age II. There are still so many unanswered questions!

Now obviously, I have no idea if this is how it is actually going to turn out, but this is what it makes me feel like. The Champion seems to play an important role in the third game, and instead of just introducing us to the character, they have us play their story and make some of their decisions that will define the Champion’s character. I do know that if this is not the case, I will still have enjoyed Dragon Age II and the journey it brought me to in the end, but the significance of why it ended up like it did would still be a question for me.

Image Credit: All images were found at http://dragonage.bioware.com