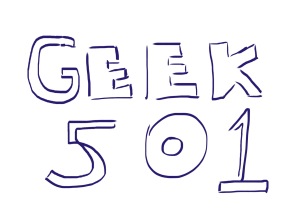 I feel like the massive explosion of geek culture in recent years – to the point that it doesn’t feel like a counter-culture anymore – is due in large part to the Internet. The Internet allows geeks to find each other, allows fans and fandoms to find each other. It allows for our expressions of geekiness to be found by others, for us to be creators as well and to have an audience. It allows niche and obscure things to have a large following, because the whole following can potentially connect together.

However, I’m also frequently reminded of how important it is to have a local focus, even as we geek. Let’s go with an example.

END_OF_DOCUMENT_TOKEN_TO_BE_REPLACED

Spock at his computer station.

Last month we talked about Star Trek: The Original Series miniskirts, how they came to be and what they signified. While researching the paper that eventually turned into that post, I found out some interesting things about technology too. Most sci-fi isn’t actually futurist, meaning it doesn’t actually attempt to predict the future in an accurate way. Most sci-fi is designed to make a social statement by taking a situation to an extreme, or to explore possibilities by asking scientific what-if questions, or both. It’s not meant to be a “history of the future.”

Star Trek did those social things, and fantastically well. It’s famous for them. However, it also turns out that Gene Roddenberry, creator and showrunner of Star Trek, was an enthusiastic futurist who wrote papers on the future of technology and was invited to lecture at NASA as well as several universities and colleges. While Star Trek was first and foremost a fantasy of space travel, Roddenberry was interested in presenting concepts he actually found workable and likely to exist in the future. One of his most important ideas was the Enterprise’s central computer, described in this pre-production memo:

END_OF_DOCUMENT_TOKEN_TO_BE_REPLACED

How to build a Hype Machine

Normally when they’re building a machine, Privateer Press is building a war machine… Warmachine… get it?

And for the 12th day of #TableTopDay, the game that'll get the most time from me this weekend: Warmachine!

I mentioned last month that they announced a third edition to the rules for Warmachine and Hordes, and since then, they have been dropping spoilers on a week-daily basis. Official information releases, answers to questions on their forums, tweets, official “leaks” from distributors and game stores and press sites…

Just a little bit, each day.

They seem to have started with a lot of the bad news, trying to soften it with some good news and also with some question answering and discussion. They are moving further into stuff that is less changed or more positive. Or things that we really just have big question marks about – things that weren’t commonly played in the current rules.

And it’s been great – something to look forward to each day, a whole bunch of excitement for the game. They’re giving us time to get past some of our anger, fears, and trepidation. Time for the trolls to get some of their trolling out of their systems, before we get to actually play with these rules.

So that’s why it’s sad that, today, someone leaked a bunch of rules images that had the word “Confidential” stamped all over them.

There’s a few things they have done that were really good. A limited window of time for things to go wrong – the rules will be available online June 11, and the first new releases will come out at the end of June. Lots of spoilers to keep us both interested and satisfied. Discussion with the community about how and why on many of their decisions.

I could see, if they had said “new edition coming, PEACE” and there had been no more info… yeah, the first person to get their hands on something was going to leak it. Or with a long enough window of time. Or any number of other scenarios. Think of how spoilers and these things explode online. But I feel like they’ve handled this really well, like there isn’t nearly so much of a “need” from the community to get more spoilers. It’s less than a month now!

So yes, how do you build a hype train? We’ve seen several recently that have worked. Star Wars. Civil War. But I think better than those has been the one for the new editions of Warmachine and Hordes, with a shorter wait time and far more information, which provides far more room for our theories and and musings. The last step will be living up to the hype: will a great game exist at the end of this process? Right now, I’m thinking so!

I’ve been amused to hear that Hover Boards are finally showing up, that people have been pushing forward to create them. The deadline they were aiming for was the date from Back to the Future 2 last year. Which made Hover Boards like a prophecy: that they would happen in that year.

More than anything else in that movie, the Hover Board is what seems to have captured and held our collective imagination. Or maybe because it seems easier and more likely than flying cars or Jaws 19. Maybe because it’s a sellable commodity that you can hope to make a bunch of money off of – but no, I think more than that. It seems like a labor of love. Of trying to bring a bit of the “future” here to us now.

We were expecting flying cars. Hover Boards. Things that move us around faster. And space travel, moving us into the stars. What we got instead, as the commercial says (and which has stuck with me all these years) is the Internet. Or maybe, drones, which work as a networked extension of ourselves, rather than us moving ourselves.

Rather than transmitting ourselves via improved transportation, we’re transmitting ideas. Meaning that we get to both bring the world – information-wise – to us, and we get to send our ideas back out. In such a way as science fiction somewhat failed to predict. That’s part of the reason why something like Neuromancer (a 1984 novel) is seen as such a classic: it was far closer to right than wrong when it comes to predictions of the future. Certainly better than so much other science fiction.

I’m not saying the point of science fiction is to perfectly predict the future. Nor that it’s our job to try to build the future that has been predicted. Which makes the anecdote of the Hover Boards being created just in time for their “predicted” date just so interesting. It’s a little piece of trying to create not the future we’re building towards, but the future we dreamed up.

Something that I have been noticing lately are people announcing that they will be blocking others on Facebook for various reasons. Now I completely understand that there is no reason that we need to take time with people who drag us down, but online we have the ability to completely block even seeing that any of that stuff exists. This means that we can shape our life online to only include those people or things that reinforce our perspective of the world. Yet, what does this mean for how we deal with the wider variety that we might experience outside of these online circles? END_OF_DOCUMENT_TOKEN_TO_BE_REPLACED