Welcome to the Comparative Opinions podcast! This week, hosts Holly and David rank all of the current shared-universe Marvel TV shows, and shared-universe DC TV shows, all against each other. Does this list match your own? Let us know! Then they end with a bit of a discussion of The Punisher, which is coming soon – where will it fall in the rankings?

Posted on October 22, 2017 by compgeekadmin in Podcast

Week in Geek, episode 6, recorded 9/27/17. News since last recording, including: first trailer for the new Tomb Raider movie; James Cameron, Avatar 2, and a new Terminator movie, oh my!; ABC and Inhumans and Agents of SHIELD; and Assassin’s Creed Origins and the reported “Discovery Mode.”

We previously discussed James Cameron and his Wonder Woman comments on Episode 2.

Posted on September 29, 2017 by compgeekadmin in Podcast

Since we’ve been talking about Agents of SHIELD so much on the podcast with us re-watching it… was interesting to go back and read this reaction post from the start of the previous season. To see how I’d reflected back on the ups and downs of the show, and on the hook they used to bring you into season 3. Hope you enjoy the reflection too!

We’ve had our eye on this show before it was on the air. We were always going to watch it; we were too much of fans of the Marvel Cinematic Universe. Of the Whedons. Of the son of Coul, first name Agent.

Season one took us pretty far down into “how much do you love all those things?” territory. Then they redeemed themselves gloriously after Captain America: Winter Soldier. Finally, it was the show it was always supposed to be, except that the title agency was somewhat kaput.

That didn’t stop them for a season two that was solid. Not stellar, but so much better than season one as a whole. They still felt a need to string us along with a mystery throughout the season, which if I recall boiled down to “Coulson is slipping information to the Avengers” and was explained away in mere moments. Not a big shocker. But it’s the things they took their time with, that they explored, that made the season. The Inhumans. Skye – now Daisy, a strong move towards redeeming a character who from the start had seemed superfluous or forced. Hydra, and a world coping with their existence. Ward, and his broken self.

Avengers: Age of Ultron did not do much to impact Agents of SHIELD, other than nailing the coffin in Hydra as we knew it. And there had been talk of a spinoff show – effectively cutting the cast in half – and that didn’t happen. Which is good, since one point so far this season is that they don’t have enough people to really have a full team… But that meant that they got to keep everyone together, and move forward with the story they have been building.

I wasn’t thrilled with the first episode – honestly, I had to go look it up to remind myself what happened. There’s a new agency out getting their hands on the new Inhumans. Doing bad things. They find a new guy, looks just like Ward, someone should really mention that. Anyway. It was nothing to write home about.

Then we watched the second episode of the season, Purpose in the Machine. And oh. My. Goodness. This is the sort of episode that is the very reason that you make this show. It had people working as a team. Science (Fiction). Comic book stuff. A returning character – from Asgard! Super powers. Heroism – and not from the people with super powers. Spy stuff. And a mystery that seemed like they might string it along for half a season (they would have, season one) that’s already been resolved, at least in part. It was harrowing. 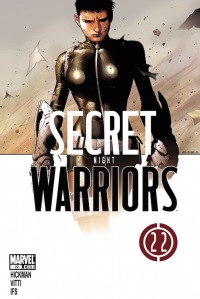 I am now really excited for this season. I like where it’s going. I’m with them on let’s get Ward – they have effectively made him into a villain. I’m with them on Daisy – now looking like Quake – becoming more of a hero, more of a leader. And on her being torn – and wanting to merge – SHIELD and the Inhumans. I’m with them on the emotional and physical scars that a lot of the characters have – and that they’re working their way through them.

They’re putting the band back together.

And I’m with them on the piece that was thrown in for the comics readers, the folks who see what’s coming… Daisy and her “Secret Warriors.” This officially means I need to read my next Jonathan Hickman series, Secret Warriors. Oh, darn.

Welcome to the Comparative Opinions podcast! Hosts David and Holly spend this week talking about Marvel’s Agents of SHIELD, especially season 4 which just finished up (spoilers), but also season 1-3 which they have been binge watching as well! The show is improved by knowing where it was going, and with some binge watching, and our conclusion was that season 4 was absolutely the best so far – so if this show dropped out of your life at some point, it might be worth it to pick it back up and watch it through season 4!

Posted on May 28, 2017 by compgeekadmin in Podcast

Agents of SHIELD is back and finishing off their season with a bang! The more that the plot has developed this season, the more that we are loving it. This is probably the best overall season they’ve done of this show – but it’s also dependent on the weight of what has come before.

Especially now, as they’ve entered an alternate reality, where Hydra won and is public and the “good guys” – and where the Inhumans are the enemy, which seems like a good lead-in for the Inhumans show this fall. Agents of Hydra. They’ve had fun with both re-doing their season promo posters as “Agents of HYDRA,” and with in-world propaganda posters against the Inhumans. 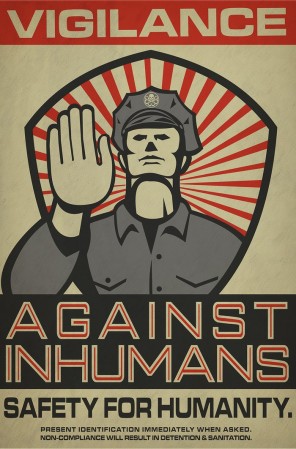 However, the images that I saw them posting on their Facebook page that got me most excited were concept art of the characters, trapped in their alternate lives. For more of the first two sets of images, check out their Facebook. But here are those characters art pictures! 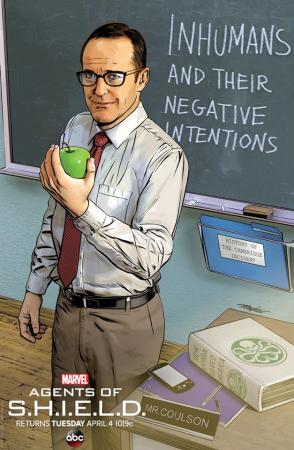 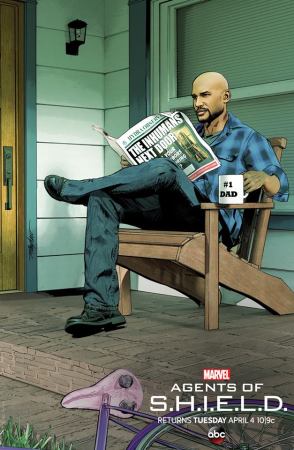