Guest post by Leah of The Lobster Dance, a blog about Japan, gender, media, and culture (with a heavy dose of manga and geekery) and I’ll Make It Myself!, a food blog.

People assume that time is a strict progression of cause to effect. But actually from a non-linear, non-subjective viewpoint it’s more like a big ball of wibbly-wobbly timey-wimey… stuff. — Doctor Who

“Wibbly-Wobbly, Sexy-Wexy”…: sexuality, like time, can be looked at from a “non-linear, non-subjective viewpoint.” —Anything That Loves, based on a comment at Comic Con

My taste in comics has always run a bit queer*of the center. If a comic has a sword-fighting woman or an androgynous character (or both at once if you please), I’ve probably read it. And much to the horror of misogynist nerds who think nerd girls do it for the ships (and what of it?!), the one thing guaranteed to get me interested in your superhero features is a queer love story. Why? The introduction of non-heteronormative romances often means that both the character and the general narrative are far more likely to break out of gender norms regarding romance.

Furthermore, I (and many others, I suspect) have a theory that we seek out and stick with media that show us a reflection of ourselves and a reflection of our desired future selves; the tropes we return to over and over are a rough guideline to where we fit into the broader narrative of our lives.

If you see aspects of yourself in a character, whether that’s Sherlock Holmes or Sailor Moon, you feel comforted in knowing that here is someone sort of like you who achieved something–saved the world; found true love; helped others; led an interesting life. Your personal literary hero may also be aspirational. While certainly we latch on to characters who are different than we are in terms of race, gender, sexuality, nationality, ability, etc., seeing someone like you achieve great things helps your self esteem; it feels like validation.  This character encounters the same problems you might have on a personal and societal level and conquers them.

For me, seeing Oscar des Jarjeyes and all my other sword-fighting queer androgynous female characters achieve great things made me feel better about my gender identity and sexuality, even though I couldn’t express it in those words at 16.  I write a lot about genderqueer and queer characters in Japanese media on my blog, but I wanted to turn the focus today to the history of English-language queer comics and of two anthologies published within a year of each other on precisely this topic. 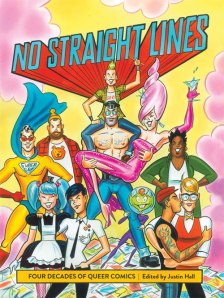 No Straight Lines. Image via Fantagraphics.

The introduction of No Straight Lines gives a useful history of what Hall defines as the three major periods of queer comics: “Comics Come Out,” which covers the underground comics of the 1970s-1980s; “File Under Queer” (1980s-1990s), which covers the beginnings of gay media and the AIDS crisis; and “A New Millennium” (2000s-2010s), which covers the rise of trans cartoonists and non-binary sexualities, gender expressions and gender identities, as well as how the Internet provided new opportunities for queer media to be produced and enjoyed by a wider audience.

What I love about this anthology is the diversity of topics. While there are coming-out stories and first-time stories, other topics include the domestic spats of a pair of leather daddies; butch women who love to knit; same-sex domestic violence (yes, it does happen and no, it is not adequately covered in DV training); love and sex and death at the height of the AIDS crisis; rejection of the status quo; self-loathing; self-love and self-acceptance; and let us not forget sexual awakenings and sexual misadventures. As Hall writes in the introduction, “queer creators will continue to hold up a fractured, funhouse mirror in which we LGBTQ people can view ourselves and allow others to see us as all”(n.p.).

Which brings me to Anything That Loves, an anthology of comics about non-binary genders, identities, and sexualities. Reading this made me realize how rare it is to see comics and media where the coming out story isn’t “and then I realized I was gay.” These stories are about acceptance and identity that doesn’t fit neatly into a category, and these identities are often ostracized from both the straight and gay perspective. It’s the sexual/gender equivalent of “fake geek girl.” The anthology deals with genderqueer identities, bi erasure and stereotypes, trans relationships, the gender police, and platypuses. Yes, platypuses. Perfect analogy is perfect.

Agnes Czaja. “Queer: A Game of Ambiguity.” Anything That Loves, p. 10.

“Could the refusal to accept the existence of bisexuality, then, be a root cause of homophobia itself” by making others think that heterogamous or homogamous attraction is just something we can turn off and on? (10)

The true aim of the queer liberation movement, as I understand it, has been to affirm the right to determine one’s own ideal romantic and sexual life as well as one’s identity. The utopian ideal where everyone is free to follow their hearts (and libidos!) benefits everyone. Christensen writes of the gay side of the phobia,

Why do bisexual people in different-sex relationships have to be at the edges of our community, instead of actually part of it?… I think if we change the way we think about the queer community, stop thinking of it as a VIP club with a litmus test required for entry… (11)

I’ll spare you my extended X-Men metaphor about being queer, but suffice it to say that there’s no one right way to be queer, just like there’s no one right way to be a nerd. We can all be mutant and proud. I’m often afraid that discussing the importance of representation of all kinds of sexual minorities as validation leading toward tolerance and acceptance will cause some sort of Magneto-esque separatist to arise and be my lifelong foe.** Categories help explain who we are to others, but they also hurt and bind us down. We’re more than just a check box. We’re people.

Anything That Loves is a celebration of every kind of diversity, and it’s a great launching point into discussions of contemporary sexualities, identities, and genders as well as into contemporary artists, many of whom do webcomics!

Other queer comics of note

—and these are only a handful of everything out there!

A new Kickstarter for Qu33r: New Comics from 33 Creators!

Fumi Yoshinaga. Kinou Nani Tabeta? The mostly domestic adventures of a lawyer who loves to cook and his hairdresser boyfriend. (Japanese)

—-. Ôoku. A genderswapped alternate history of the Tokugawa Shogunate. (Japanese and English)

Chiyo Rokuhana. IS: Otoko demo onna demo nai sei (IS [Intersex]: Neither Male Nor Female). I’ve seen the drama version of this but haven’t read the manga yet. When male-identified intersex child Haru enters high school, he has to do so as a girl because of the sex listed on his family registry. (Japanese)

And more at Prism Comics!

*or LBGTQIA. I prefer the umbrella-term queer, but not everyone does. See also the “Gay Sandwich” comic.

**I’ve met one or two “radicals” like this who had no room in the community for anyone deemed “not queer enough” by them, and good riddance, you are not worthy of my sweet X-Men reference.