Bioshock Infinite and the Statute of Limitations

This hasn’t been a great year for me playing videogames. Been so busy, so many things going on (not least of which is Comparative Geeks…) that I have a number of games that are incomplete. I have mentioned my thoughts on Diablo 3, which Holly and I should beat here at some point soon on the console (which I have also reviewed). I wanted to get Dragon Age 2 beaten, but still have not moved past the decision point I wrote about before (plus, how much will my save game matter now?). I still need to beat Final Fantasy XIII-2, though like Dragon Age 2, I have seen the end because Holly beat it. I am close to beating Final Fantasy Dimensions, but still haven’t. KotOR I have reached the point where it’s more open-ended where I go… twice. Holly beat Portal 2 recently, and I still need to finish the single player for that.

Really just a lot on the table.

So what game have I been playing? I have finally been getting back to Bioshock Infinite and working on beating it, and the further I get, the harder it is to put down! I am glad I did pick it back up, because it is phenomenal. There’s so much to say about it! 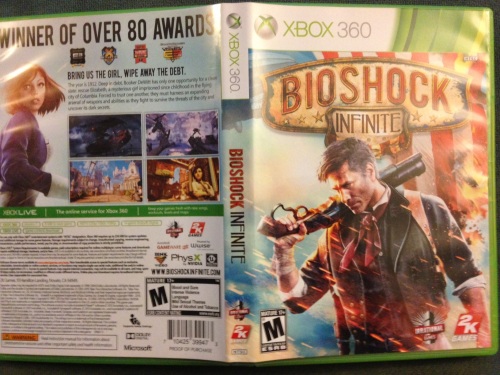 Winner of over 80 awards… so it says on my preorder copy of the game. Those are awards they got before the game came out.

And yet, I don’t feel like I can. Every time I see someone start a conversation about Bioshock Infinite, they cut themselves off. They’ve been respectful of spoilers. And so I feel like I need to be too – because the game experience, unspoiled, is fantastic. So spoilers not ahead for Bioshock Infinite!

This game has only been out a few months, although given how many people dived in and worked on beating it immediately, you’d think that this would lead to a short Statute of Limitations on spoilers.

For instance, on SourceFed Nerd, and their show Table Talk. Holly and I eventually decided we had to watch Cabin in the Woods, because it kept coming up, and they did spoiler warnings and we had to fast-forward through. We decided that we were tired of being out of the loop, on a movie now only about a year-and-a-half old. Well, add a couple years for production hell. Still: they were willing to talk about it, and just warned about spoilers. But some of the questions people were asking, even, were spoilery.

However, another topic that comes up a lot on SourceFed Nerd is Bioshock Infinite – and they tend to basically hit a point where they just stop talking. Where they say blatantly that they don’t want to spoil people. To the point of not even talking about the game with a Spoiler Warning.

And really, in part this says a LOT about this game, that people enjoyed the story so thoroughly that they are unwilling to spoil others on it. Which is not necessarily something you see with other things.

After all, things with a lot of Hype tend to be dangerous ground for spoilers. The ultimate example probably remains Harry Potter and the Half-Blood Prince. This is my favorite of the series, so I am glad I missed the spoilers. I actually took it with me on a flight to England, so, pretty insulated from spoilers at the time.

In respect of people who haven’t read this book or seen the movies, I won’t go into more details. Instead, I will just say: read the books. Watch the movies.

But, with as much hype and anticipation as Bioshock Infinite had, you would almost expect there to be the same sort of response. And maybe there was, and I missed it – and have still missed it.

We were excited enough about this game to preorder the special edition, and get this fancy artbook. Which we have yet to look through, to avoid spoilers.

And when I say hype, I mean, go back and look at my pre-release post about Bioshock Infinite: https://comparativegeeks.wordpress.com/2013/03/13/how-to-prepare-for-bioshock-infinite/. I was not shy about being excited for this game. And they made so many trailers! And with all of that, all they did was build a mystery, rather than give things away.

I first heard about and saw this game in a video from 2010, that I saw highlighted on my X-Box. Years later, the game came out. Having trouble finding that same video – or perhaps I am mixing my memory with one of the many videos from the years after, as I followed this game – but here’s one example from 2010:

The interest is there. We’ve been waiting ages. But no massive spoilers campaign?

Maybe it’s because the spoilers aren’t easily compressed. The spoilers for Harry Potter and the Half-Blood Prince condensed down to a three-word sentence, that does serious damage to the story. Is something like that possible with Bioshock Infinite? I’m not done yet, but I don’t think so.

So When Can We Talk About It?

I now have notes to do at least three other posts about Bioshock Infinite. It might be safe to do one of these soon, but the other two – even their topics or titles might be spoilery. So I don’t think I can write them yet.

I think the first barrier to overcome will be the end-of-year Game of the Year discussions. This game is not only a contender, but is right now my top pick (will GTA 5 drive Bioshock Infinite from people’s minds? We’ll have to wait and see!). Part of justifying Bioshock Infinite for game of the year – a large part – is the story, and so at that point, further story discussion may have to happen.

For me personally, there are a couple of other hurdles. One is that Holly has not beaten the game yet – and has not watched me playing it either (I have played it when she was not in the room, to avoid spoilers). So I will definitely have to wait for that. And also, I know several of my friends and guest bloggers have not yet beaten the game (or I don’t think so?) and so I don’t want to spoil them either.

So when is a good point to start having deeper conversations about something, especially something as good – and popular – as Bioshock Infinite? At awards time (like at Oscars time for movies)? After a year? Let me know when you think the conversation can start in the comments below! And no spoilers!

7 responses to “Bioshock Infinite and the Statute of Limitations”