Jonathan Hickman and the Illuminati

There’s one theme that I keep seeing between all of his comics I’ve read so far. And one theme that has led to my Hickman posts being some of the most popular I have written here on Comparative Geeks. The Illuminati.

This image I think comes up on Google if you search right.

Something about this theme – about the men of power who secretly run the world – is appealing to Hickman. It makes them a villain that can be defeated, makes the world something that – through a contest of will – can be changed. It makes for great story-telling; but does it tell us anything about the Illuminati themselves? Let me work through the comics and consider!

My Jonathan Hickman reading started with the New Avengers. This comic centers around the Marvel version of the Illuminati – the smartest super heroes in the world band together to secretly protect the world from the biggest threats. It’s always hard choices and nail-biters, and at the end of every time together, the Illuminati said it was the last time.

Well, right up until Hickman took the reigns.

See, he didn’t come up with this Illuminati idea or team. He just took them and turned them into an ongoing plot, gave them a threat so large and long-term that they have a comic, and that the universe is pulling itself apart without them.

I go into it in more details in my post on the New Avengers, linked above. I included diagrams. Diagrams! Like I said, it’s the Marvel scientists, all banded together. In more recent comics, we’ve started seeing more from alternate realities, seen other versions of the Illuminati, other groupings. 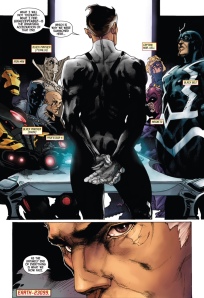 But there are lots of them. Like the odds of their existence is just really high in the multiverse.

Everything seems to be coming to a head. All of the universal war that happened in Infinity had to do with the Illuminati – and now it seems the Avengers have found out. I’m waiting for a combined volume of the Avengers before I can read more of New Avengers, but things may just fall apart for these Illuminati!

But still, these weren’t an Illuminati invented by Hickman, so it could just be a fluke, something he’s working with in a combined, shared comic universe. Not his own comics, right?

So then, while not at first, the Illuminati start to show up in The Manhattan Projects. Maybe based on the thought that President Truman was Illuminati or Free Mason… And they’ve really just ended up in a sad state. Abuse of power, excesses and hedonism.

And they don’t want to give up their power.

From The Manhattan Projects #8

Most all of Volume 2 deals with the scientists defeating the Illuminati – and effectively taking their place in charge of the world. But they’re not looking for power, and nature abhors a vacuum – eventually, other power steps in.

So really, this is just Hickman taking an existing historical conspiracy thought and playing it out in his alternate history story, right? When given an entirely original plotline, he wouldn’t include the Illuminati, right?

In East of West, Hickman looks at an alternate version of the story of the end times, of the Apocalypse and the Four Horsemen. Building in a new religious tale. Oh, and a meteor that struck during the Civil War, changing the trajectory of world history.

America splinters into seven nations, of a variety of ethnicities and faiths. It’s a really interesting vision of what could have been. And… wait, what are the leaders of the seven nations doing?

From East of West #2

They are The Chosen, leading not only their seven nations, but a secret group that leads the will of the new faith – a will which is the end of everything. Another Hickman theme…

Oh, and if defeating them saves the world, if the Illuminati are the villains, what does that mean for Avengers and New Avengers?

Jonathan Hickman and the Illuminati

Let me make a comparison. I’ve always said that part of the success of Quentin Tarantino’s movies is that he gives you villains that you love to hate, so that you’re ready for the vigilante justice the heroes heap on them, so that you’re desensitized to the violence. In which case, Inglorious Bastards is a gimme, because it’s the Nazis, who are so easy to hate.

Has Hickman hit on a similar story plan – give us the Illuminati, someone easy to villainize, easy to hate? You can give them life and personality, and then you can tear them down and defeat them and we all cheer.

Or is it more than that? Is Hickman trying to make us think hard about the existence of the Illuminati? I don’t know. And while I could try to research the Illuminati, I know that a lot of people’s research on the Illuminati leads them here. And I know here, I have only talked about them based on comic books.

So maybe the place to go is to Weird Al.

I don’t have the answers. Neither does this interview. Are you here because you’re interested in the Illuminati? I’d love to know what brought you here. Let me know in the comments below!

11 responses to “Jonathan Hickman and the Illuminati”