In other news, Thor is a woman now.

This week, Marvel let everyone know that they were going to announce some new, big news on The View. We were expecting big news. We were expecting something thematic with The View, as well. I was ready to write a post about Katee Sackhoff as Carol Danvers.

The last news that Marvel shared on The View, though, was a comics related story, about the marriage of Northstar and his partner (now husband) Kyle. So maybe we should have expected comics news. So we got this story.

This is not the story we expected, and it is both exciting, and not. A female super hero movie should have been the news, but I feel like that’s what everyone is talking about now. So let me look at a different angle for why this isn’t such big news – the fact that Marvel has done this before.

They’ve Done This Before

With Marvel characters like the X-Men have powers that stick with them, that they are born with. Even characters who undergo a change, like the Hulk or Fantastic Four or Spider-Man, they’re hard to carry over (although they get duplicated often enough).

But there are Cosmic Powers that are conveyed by an item, by the sort of science that often seems like Magic. At least, that’s how Thor explained it to us in the films! So while the most famous one is Mew Mew… I mean Mjölnir… there are plenty other in Marvel lore.

(Well, and in DC lore as well… I know about the Green Lanterns, at least, and I’m sure there’s more!)

And not only can I name three others right off the top of my head – all three examples are current members of the Avengers under Jonathan Hickman. Another reason I am loving his run on Avengers!

So who am I thinking? Well, for instance, there’s the Shiar Imperial Guard. An alien empire made famous during the Dark Phoenix Saga, we later find out that the positions in the Imperial Guard are carried on from soldier to soldier. One of these is Smasher.

Yep, the old, original, male Smasher, and the new, female Smasher. And she kicks serious butt. Okay, so who else?

Again, the look is there. The power is there. But now, it’s a female instead of a male. Also, she’s a lot scarier… be sure to bring her pie.

And let’s not forget Captain Marvel. 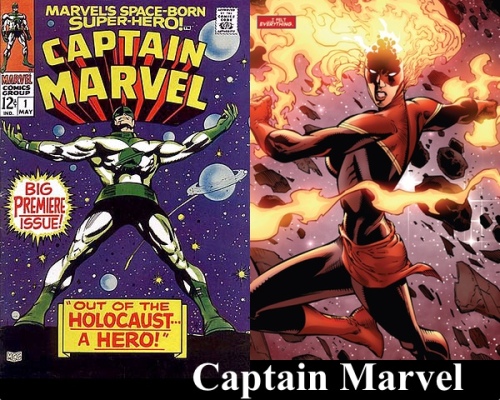 Originally just the Kree experiment… yeah, Carol Danvers as Captain Marvel is, by now, the expectation in this role.

So while Donald Blake might be who we expect to be Thor, I am cool with Thor being a woman. But is it news? Where were the conversations about these other characters? Where’s the love for Hickman and his team of Avengers, where you have characters like Captain Marvel and Spider Woman recruited because, well, they belong.

I love that scene. And I think a female Thor will fit right in. Because, well, it’s nothing new. No news to see here, move along.

Okay, it’s not news. Not what we were expecting. Not a female superhero movie. Not even something that will impact the Thor films – the last movie was based on a comic from the 80s after all. In many ways, they set us up and then knocked us down. So why do it at all?

Well, because it is a bit exciting. While Marvel calls Thor “one of the big three” of Iron Man, Captain America, and Thor, well, I might not agree with that analysis, but it’s still a big name character. It’s also a character with a world that isn’t quite as creative as the others can be – based as it is on existing mythology. This gives a chance to do something really new, and really different.

As Holly has said, we have really come to like Thor. And the new run on the comic is going to be by Jason Aaron, who wrote the whole run of Wolverine & the X-Men, which I loved. So I think we’re going to be reading this comic.

So why did they do this? To sell comics. Well, I guess it worked.