The Rivals for Catan – a Review

Holly and I were able to pick up a couple of board games last week on sale, and so of course we needed to check them out! One was a game we had been looking for for a long time: a two-player version of the classic Settlers of Catan. Our local game store regularly had the small box that was the 5-6 player expansion, but not the stand-alone 2-player game. 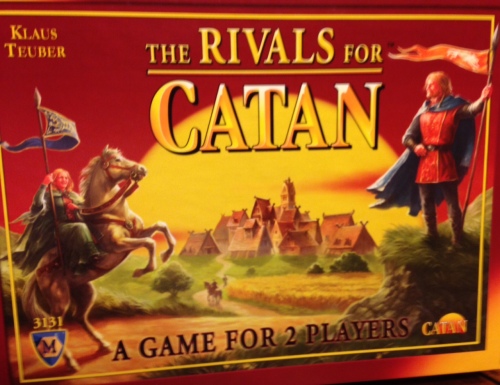 Not so this time! They had it: The Rivals for Catan. This game is made for only two players, which is a subset of games Holly and I love to check out. A lot of games are made for more players, and come up with some complicated version for two – a recent example was 7 Wonders. Some games don’t even try, like Settlers of Catan itself – it’s a 3-4 player game. We made the mistake of giving it as a gift to a couple – they can’t play it just the two of them!

So our quick review? This game captures the feeling of Settlers of Catan, it is well balanced (which, bad balancing can really remove the fun from a 2-player game!), and it has a bunch of play variants. This one box allows for 5 different games to play! Want to know more than that? Read on!

The game plays with tiles, laying out your principality visibly where you can see it. So you have your settlements, the roads connecting them, and then the resource regions that are nearby. You roll dice like in Settlers to see which resources produce on a given turn, for both players.

Then you build not only the basic structures like the settlements and cities, but also things like ships for simpler trade (like the edges of the board in Settlers), and buildings which enhance production, or provide other game effects. Or there are people, and you add them with their skills and combat prowess, to be the soldiers and otherwise to be another element.

Playing off of these various aspects, there is another die you roll each turn, which says which type of event happens. Sometimes it’s from the random events deck, but sometimes it’s the thief, or a harvest. Reasons to have advantage in combat or trade, as well as to be building up your resources and towns. 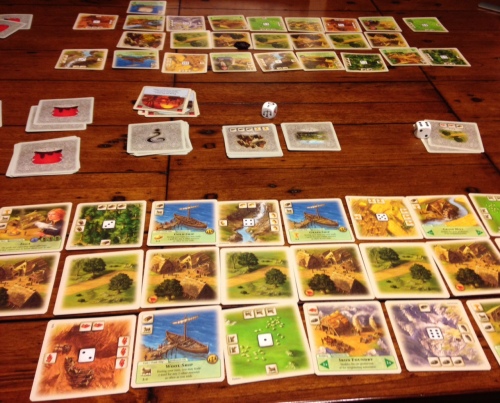 All the Settlements are built! You can run out!

I am assuming these later elements come from some of the many expansions to Settlers of Catan. I have only played the base game of Settlers before, so this was a nice introduction to these mechanics. But wait – there’s more!

Once you have the basic game down and under your belt, there are “expansions” or “themes” to play – variants on the base game, which take it from the dawn of a civilization and into later eras. Eras of prosperity, or turmoil, and of progress.

The Era of Turmoil

The gameplay in each of these is very different from each other, and from the base. The most memorable was the Era of Turmoil, which was, as might be expected, pretty awful. It did not help that our dice just kept rolling the thief – that, combined with all of the awful attack cards and events, made this a grueling, dragging game that was tough with two people – every attack action is directed at your one opponent, after all. 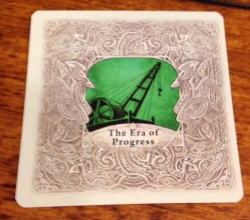 The Era of Progress

We played the Era of Progress after this, and it was such a relief and such a faster game. The cards tied in with learning increase your hand size, and we could do more and had lots of options. A lot of the action cards were just raw materials, not attacks or strategies. 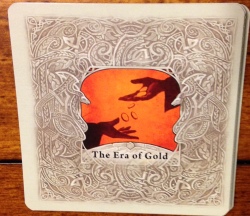 The Era of Gold

The Era of Gold, which we actually started with after the base game, was somewhere in between these: some rough patches, not too much added, but different from the base set. It especially made the added resource of Gold seem useful, and gets an honorable mention for being a solid way to mix the game up. This one especially made me think about how the themes were like games of Dominion, as well, and this one was The Big Money.

There’s one other way to play: mix it all together. There are some cards you cut before doing so – mainly duplicates, so everything is a lot more rare – but then you just mash it all together and play. We haven’t done this yet, as it seems pretty epic, but it should be a fun experience!

The main problem I would say with the game is that it takes a LOT of space. The cards are a few inches square, but your starting area is 5 by 3 of these, plus there’s your opponents towns, plus there’s all the many draw piles and buildings… it took almost our whole dining table to play.

Diagonal picture to try to show you the scale of this game!

We have a number of 2-player games which are far more compact or portable, some of which have made for great airplane gaming, even – though our iPads cover this need now! This game is not by any means one that could do this, nor one where you would have much room to play even in a hotel room or elsewhere. This needs a large, dedicated space. The adjacencies and empty space and all matter in the game with many of the cards or choices, and so you have to be able to lay things out and expand.

The game was also not super quick, but not too long, either; maybe 45 minutes a game? We played through most of the variants without getting sick of it or feeling like the whole day was gone, so maybe it’s just right.

I mentioned the balancing, but let me say again: it was very well balanced. Two games were won by Holly literally on the turn before I could have won. In both cases I showed her exactly what I could have done to win next turn. This kept us both engaged and in it. Settlers has always been a game where you can drag it out a bit, and you’re waiting until people go for victory points to start that scramble yourself. This game keeps that, and pulls it off well.

I think this is a solid board game for a couple to get. Maybe steer clear of the Turmoil set, unless you really like attack cards, and otherwise, you’ll have some fun, build some cities, and have some narrow victories. And, as a smaller-package sort of game, it’s pretty affordable, so this is one I would definitely give a look!

This entry was posted in Board Games, Gaming and tagged 2-Player Games, 7 Wonders, board games, Dominion, Recommendations, Review, Rivals for Catan, Settlers of Catan. Bookmark the permalink.

14 responses to “The Rivals for Catan – a Review”