Yesterday, Marvel’s big crossover event of the fall came to an end. Infinity. (Check out my pre-Infinity post here for more). Named largely for the string of infinity-named crossovers having to do with Thanos, the Mad Titan, there nonetheless were larger implications to the name this time, as two major plots intertwined. Both plots were written by Jonathan Hickman, which are the current run of Avengers (which I’ve talked about before here), and New Avengers (which I’ve talked about before here).

In short, in Avengers, Iron Man and Captain America have been working on building a bigger team , to handle bigger threats. Which, of course, plopped down on their laps. They have been building towards the Builders as a threat since the first issue, where their creations (Ex Nihilus, Abyss, and Aleph) have caused basically all of the threats and plots of this comic thus far. So this was being planned all along.

In New Avengers, a secret Marvel society – Marvel’s version of the Illuminati – is dealing with an exceedingly dangerous problem. The Universe is colliding – with itself, with the multiverse – and the collision point is the Earth. There are charts, I included them in my post linked above. They are fighting against the death of Earth, first of all, and the death of everything, as a larger problem.

In Avengers, it is a bit of lighter fair (only a bit), with heroes, mythology. It’s built very mythologically in its storytelling. In New Avengers, it’s very cerebral, dealing with heavy problems, building bigger bombs. Most of Marvel’s smartest are involved. But with the same writer, these plots are absolutely connected, and it’s in Infinity that the two plots run into each other. So there’s a lot I want to talk about – enough for two posts! Today, I am going to focus on what happened in Infinity. For my next post, I will focus on where things go from here – what plot-points are still hanging, what plots were created. Spoilers to follow, with pictures! Avengers? Assemble!

It Was An Avengers World – It Was The First of Many

The Avengers spent most of Infinity in space – fighting the Builders. They were a team, as Iron Man points out, built to handle the impossible – and they do a pretty good job of it. Able to do what the heads of state of the major galactic empires couldn’t figure out or do, the Avengers steer galactic civilization towards victory. So, you know, not that epic, right?

The battles are huge. They are largely narrated through, though there were more details in some of the tie-in comics, such as Avengers Assemble and Captain Marvel. The battles are huge, some of the heaviest hitters don’t even really get to fight – they have to lead. When you have names like Gladiator, Ronan the Accuser, Annihilus, and the Super Skrull all together – and they’re leading, not fighting? You know it’s big.

Well, until the end, when they finally get to fight Black Dwarf, one of Thanos’ lieutenants. Then they are needed, and get to fight.

The star of the story in space, though, is Captain America. It’s his strategy, consistently, that works. Maybe it’s insights he has from spending time with – and against – Ex Nihilus and Abyss. Maybe it’s just who he is, how he thinks. But Cap has it figured out, and by the end, it’s about more than just one Avengers World. It’s an Avengers Universe.

Of course, honorable mention has to go to Thor, for being a badass. He single-handedly wins back the Kree homeworld. To be fair, they decided to hold the world with only one Builder. But still.

The Builders-related characters also progressed their plots quite a bit. Ex Nihilus leads his brethren to revolt against the Builders, and then eventually returns them to their purpose: life. Abyss, meanwhile, is apparently the last of her kind. So there will be implications there.

And the Starbrand wins them a couple of fights. He’s kind of just a little bit sort of COMPLETELY OVERPOWERED. Of course, if he can’t reign it in, then his power is really only useful against, say, space fleets. 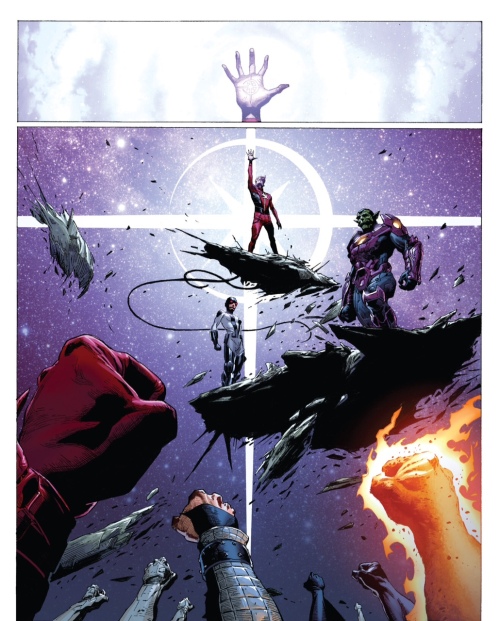 And Captain Universe is still, and definitely, dying. Because the universe is dying. But that’s not something the Avengers have figured out – leave that to the New Avengers.

What Are You Waiting For?

It was jaw-dropping when suddenly, everything was explained. The Illuminati were invited to another Earth, through an incursion. To speak to the Builders, in another universe, over another Earth. Builders, who knew that Cap had defeated the Builders in the main Marvel Universe.

Builders who say that they are currently working, across the multiverse, to destroy the Earth. All the Earths. To solve the incursion problem.

So this explains the whole plot in space – the end of the universe, of all the universes, is staring them down, and so the people with the power and knowledge to do something about it are trying.

Of course, at the end, all the hope is taken away. Black Swan, the Illuminati’s knowledge source about the incursions, knows of the Builders. And knows they only have access to about 5000 universes. Out of, well, let’s say Infinity. (See what they did there?). Sadly, destroying 5000 Earths will likely not save everything. Won’t save much of anything, really.

It will only slow it down. Shading the Apocalypse, as the Black Swan has already described it.

Yet that question, posed to the Illuminati. They have the power to destroy the Earth. What are they waiting for? The urge, the thought that it might work, that it might save everything else… The temptation.

And of course, if things had gone poorly with Thanos, the Earth would have been destroyed. Thanos, who found their world-killing bombs they had built to fight the incursions. Solving the problem, perhaps, but also kind of making the Marvel Universe more boring. So he had to be stopped…

The Gauntlet… Or The Tribute

So the Builders were the big trouble, the one that drew the Avengers away from home. So really, it would make sense for someone to turn to Earth with its mightiest defenders gone. Ripe for conquest. And we knew Thanos had his eyes on Earth – ever since the Illuminati used the Infinity Gauntlet and drew his attention.

However, Thanos had another goal when he came to Earth. Since the events of Thanos Rising, they were exploring the idea of Thanos hunting down and killing his offspring. Of which he has many. They’ve gone to a very psycho-killer place with Thanos, but I think that is an exploration for another day – expect a character study of Thanos.

But Thanos and his armies came. And really, the Illuminati did entirely decently against him. Wakanda held; the X-Men took two of Thanos’ lieutenants to be defeated (not really even sure if they were… we just know the lieutenants moved on); Atlantis had already fallen, and Namor was crafty and lied; Iron Man and Mr. Fantastic did a lot to hold them off using Avengers Tower.

Okay, Dr. Strange has had better days. However, the Ebony Maw seems to be far more than anyone expected – and we’ll be sure to see him again.

But the star of Infinity – on Earth, anyway – was Black Bolt. First, he is the one who was hiding Thanos’ son – hiding somewhere among the Inhumans on Earth. And secondly, he’s been planning and scheming. Planning to return the Inhumans to their glory, perhaps, or to remove their glory and spread their existence.

So it is to Black Bolt that Thanos comes to negotiate, for the sake of the Earth. And Black Bolt speaks for us all. 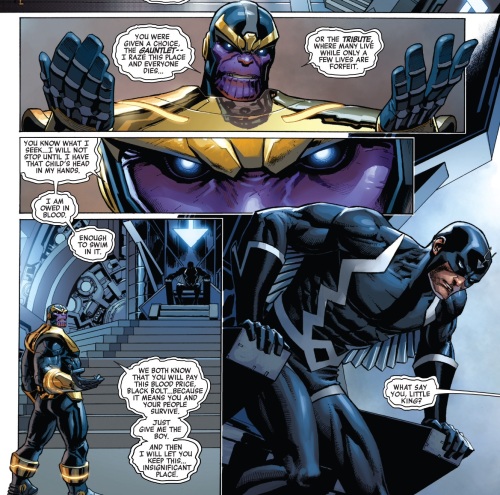 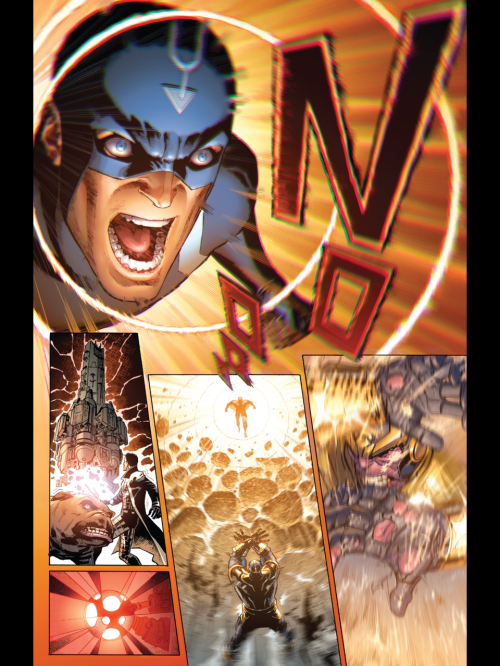 Black Bolt’s brother, Maximus the Mad, had built a bomb to be triggered by Black Bolt’s screams, and which exploded out spreading Terrigen Mist, which makes Inhumans what they are. And this unlocks all of their powers, increasing the numbers of defenders the Earth had, and, more importantly, unlocking the power of Thanos’ son. Which was… well… something that let him do this.

And that’s that resolved. The Avengers, with the help of the Galactic Fleet, free the Earth, and Thanos is defeated, and we go from there.

I really enjoyed this crossover event. For me, in many ways, it didn’t feel like too much of a crossover – because I was already reading both of the main titles that fed into it. Instead, it felt like the sort of plot that needed to happen. Because what’s happening with the incursions can’t go unnoticed forever.

I could see someone who reads some of the other titles that ended up tied-in feeling far more like this was an interruption to their regularly-scheduled plots. However, these titles also weren’t written by Jonathan Hickman – so the main stuff is so good!

So like I said, my next post will be about the ramifications, but I wanted to share some of the fun of these comics, and I hope you enjoyed it. If you read the comics, what would you add? Let me know in the comics below!

12 responses to “Marvel’s Infinity – My Review!”