In my second post exploring Science Fiction and Religion, let’s turn to a recent game which actually did work hard to create an invented religion within its science fictional world – something that is often skipped or overlooked. 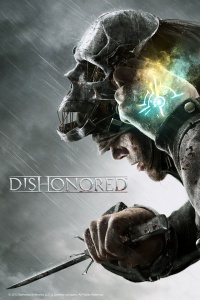 A game I’ve written about and recommended before – Dishonored.

The Outsider is a magic-gifting, trickster sort of deity. He only interacts rarely with the world directly – and only then to gift power to a human and let them influence events. And thus, Dishonored happens.

However, from the lore we get to read, and the interactions we have, the Outsider does not seem to be a creator sort of deity, but is really just the trouble-maker and pot-stirrer. He sits back, and messes with history, influencing a select few instead of improving the overall lot of people… maybe not even of his believers or followers. 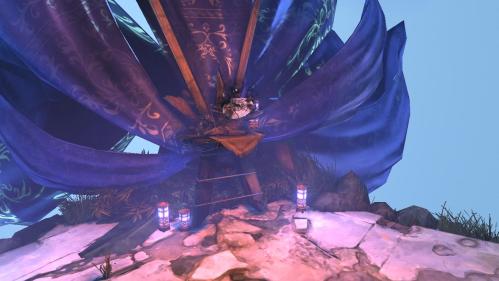 There are strange places of worship for the Outsider – these shrines. Found on http://dishonored.wikia.com/wiki/Outsider_Shrines

This is my first consideration about the creation of the religious world of Dishonored. Was this made to be a unique sort of deity experience? If so, they succeeded. Or, is this someone’s reflection of what they feel like they see from religions in the world today? This is more distressing of a thought. Is that all the God is, in some people’s eyes? An uninvolved clockmaker who occasionally meddles but is generally not present?

Okay, so do we have an uninvolved deity who causes trouble? Yes. Does he have followers? Yes, it sounds like the common folk kind of superstitiously do follow him, as well as some more extreme examples (Granny Rags, the Inquisitor). Is there a religion following him? Not particularly, no.

But there is one set up against him.

Enter the Overseers. They are the religious order of the world of Dishonored, and from reading their lore and interacting with them, we see that (other than corruption and power), their belief system is built on being opposed to the Outsider. Yes: it is a whole religion with a purpose of being against something. 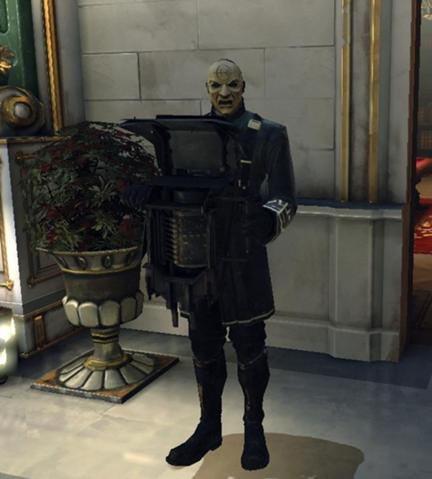 The Overseers find technology to oppose the magic of the Outsider – like these magical music boxes. Found on http://dishonored.wikia.com/wiki/Warfare_Overseers

Now, because we do not see any evidence of any other deities, that’s it. That’s all it is. A religion set up to oppose the worship or belief in the Outsider. I mean, okay, I haven’t exactly laid out any redeeming qualities of the Outsider – I don’t think we’re necessarily supposed to find any – but still, there ought to be better things to do than focus all your energy into opposing something. Even if it is a deity. At the very least, something positive to be for, instead of just being against something.

So is it weak writing? Did I fail to notice or read stuff about a creator sort of deity? Were they trying to create an entirely new sort of religion? Any of these is possible, and I hope they are right. Because here the alternative is that this is what the writers see when they look at religion is that it is against things – and if you listen to all the talk about this or that being a sin, or leading to Hell, or whatever else – these are the sorts of things that make the media in America, anyway. If this is all the writers thought about what they saw of Christianity today, then they were trying to reflect it in their game – a religion that says what things are bad, with no other redeeming qualities. Or really, with no other qualities at all.

Reworded: It’s like saying that Christianity is a religion based on the opposition of Satan. Or maybe even closer, that it is a Norse religion with only one deity: Loki. And that worship is dedicated solely to opposing Loki. No tricksters for us!

So what were they going for in Dishonored?

A religion that is different from the ones we have in the real world? With a deity who exists and is a deity without being a supreme being, with a religion based solely on the opposition thereof?

Or a reflection of what they saw of religion in our society today? A religion that is based on being against things instead of for things? Deities only interested in messing with history, if anything at all?

What do you think? I hope for the former, but wonder if it isn’t instead the latter.

One response to “Science Fiction and Religion – Dishonored”