So, I have all these fancy, not eight-bit-style games I could be playing. Like Dragon Age II, in which I still have not moved on. Like Diablo 3, which I’ve at least considered moving on in. Like the co-op games we got recently. Like Final Fantasy XIII-2, which I have still not actually beaten myself.

But no, I’ve been obsessed with Final Fantasy Dimensions. Over 60 hours now. I’ve talked about it before, mentioning it as a new game I had picked up. I’ve enjoyed the gameplay, as an RPG player. I think they did a great job of fitting in with the platform they are on, with mobile devices, and matching their sales model with it. And the story and writing are great – with references to such a point that I wonder if it was originally written in English, and not Japanese. 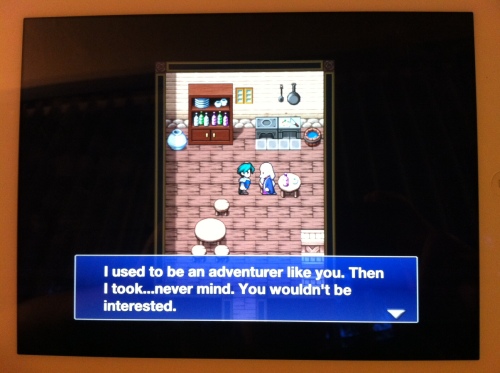 I saw this, grabbed my phone, and took a picture of it. While laughing hysterically. That was when I realized I was totally going to write this post. It was only later I thought of the fact I could take screenshots rather than using an iPhone to photograph an iPad…

So let’s look a bit more about what I love, so you can think about whether it’s worth a little time and money for you! END_OF_DOCUMENT_TOKEN_TO_BE_REPLACED