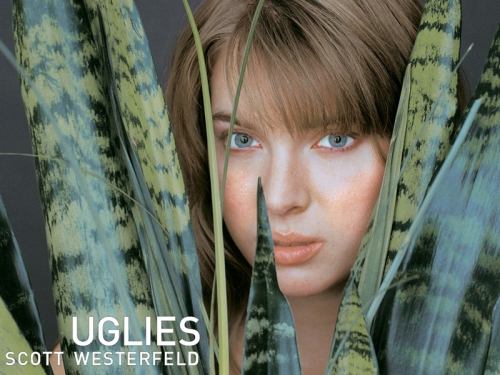 An author that I discovered some years back is Scott Westerfeld. I do not even remember how I first found the initial book I read by him. I think it might have been completely by chance while at a Barnes and Noble and I ran across a table with books for young adults and found Uglies. Obviously I decided to buy it and I fell in love with the book. Of course it was the first part of a trilogy and it does not end in a way that really gives you closure. It ends in a way that makes you want to read more. So I got the rest of the series.

Then I discovered a few more books that Westerfeld has written and I have loved every one. He has written more for young adults, but the couple of books he wrote for adults (that I know of) were really good. So here are the Scott Westerfeld series that I have read and recommend.

So this was the first series that I read by Scott Westerfeld and there is so much to love about it. The writing is definitely meant for young adults, but the content has so much to it. It is also very poignant when thinking about the world we live in today. The world is one where there are a variety of cities, but they tend to remain separate. The city that we are presented with is one where beauty is loved above everything else. All kids are gathered into a single area where they go to school just waiting for the day where they get to be made beautiful.

It is an amazing conversation about the meaning of beauty and what if you did not want to be altered. I feel like especially with the body image issues that we see in teenagers this book can speak directly to some of their thoughts and perceptions. It takes a look at some things that are really happening in many ways already, but takes it to the extreme outlining the problems that exist with these types of thoughts. Again, really good series, I don’t want to give too much away, but once you start it is hard to put down.

Risen Empire and The Killing of Worlds

So this was the next Westerfeld that I read because of David. He found out that I had read the first books and recommended that I try out this series, if you can call two books a series. This is more of a traditional science fiction book, taking place on spaceships and obviously in space. The story is good, but the best part of it is the description of the space battles. These are not the books that could be made into a movie, but the descriptions of the space battles and how they happen on the nano scale is incredible.

The timing of how the battles work in these books is incredible. There is no gravity in space so once you start going it is not the easiest thing to reverse directions. So you have the moment when you pass by each other to plan an attack and get passed. Then try and figure out how to get turned around. It just presented space battles in a totally different way then it had been presented before. Another great read and highly recommended.

The story takes place during World War I, which is not the war that is most often discussed. I would not doubt that it is included in the book, but the neat thing from the audio book was a history lesson from Scott Westerfeld about what really happened during the war. Telling the story from the perspective of a girl from England who has dreamed of being in the sky, but the only way to do so is to pretend to be a boy. Then there is an Austrian prince who is running away to survive and potentially save everyone. The creatures and mechanics that they create in the story are brilliant and are explained in a really neat way. You can understand how these various systems were supposed to be built and it makes sense. There is so much more, but I think in the end you just need to read it to understand, it is worth the time.

I think one of the things that I love about Scott Westerfeld is his character development. He creates such fascinating characters who you want to know. I never thought about it too much before now, but he also creates great female characters. In both of the young adult series the main character is female and she tends to break away from the norms of society. I would want to be or want to be friends with both of the main characters from Uglies and Leviathon. As an author I have enjoyed what I have read so far and would definitely be willing to try more.