Having recently finished the second and third episodes of the Inhumans figured it was time to write up the verdict post. I know we are already almost half way through the entire series, but still wanted to get my thoughts out there since the first episode is still available.

At the same time the performance by Black Bolt, Maximus, and Medusa have been great, although some of the special effects have been lacking that is mostly dealt with by the end of the first episode. We are definitely going to finish watching this limited series, but so far nothing they have shown me makes me want more than just this limited run. (Spoilers for Inhumans after the jump.) 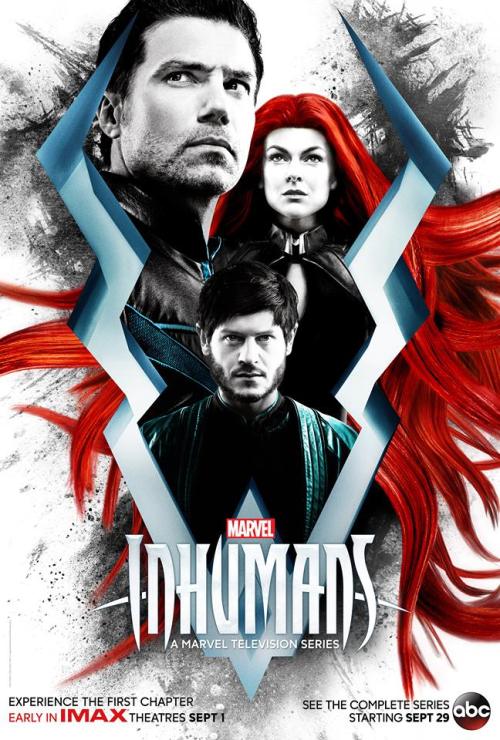 END_OF_DOCUMENT_TOKEN_TO_BE_REPLACED

Last night we finally made it through the second episode of the new show Ghosted. The premise in and of itself sounds interesting, although a little bit Men In Black meets The X-Files.  You have the conspiracy theorist / genius who has been deemed a crazy fraud and a former cop who left the force and hit rock bottom. They get thrown together into a crazy world of paranormal activity.

The thought seems good that there is the cynic cop who is just looking at the logic of the situation and then the former professor who understands the potential science behind the paranormal. So it is the contrasting personalities playing off of each other that would make the show work. The problem is that the connection between the two main characters so far is just not there and everything is happening in such a whirlwind where we are meant to have a connection with what is happening and it is missing.

So part of the inherent problem of the show might be that the episodes are only 20 minutes long instead of the typical 45 minutes. With only 20 minutes to try and explain an entire underground government agency – plus introduce our two main characters – the pilot episode just came across as kind of frantic and it was hard to really get a grasp on anything that was happening. Now understanding that it was the pilot episode I was willing to give it the benefit of the doubt, which is why we watched the second episode.

The second episode was better, but still lacked. It seemed to jump ahead to days or weeks later and they had a mission together, instead of taking us to right after the first episode like we might expect. There was no real explanation of what they faced or how it worked. Everything just sort of happened and throughout the whole episode there was no connection between the two main characters, which is vital for a show like this.

The other big issue is definitely the lack of chemistry between the characters. They are there on screen and going through the motions, but nothing seems to be sticking. There are definitely some funny moments and it might get better; at the same time I just don’t think there is enough there. I like that it is a female who leads the organization and a woman is the one who does the weapons, but still there needs to be something to connect with and there is not.

The second episode is almost like walking in mid-way through a season where we are supposed to have seen how they have gotten to this point. Instead the show has just jumped ahead to a point and we are supposed to be along for the ride.

Some of it if we didn’t already have a lot of great shows that we are watching I might be willing to give this show more chances, but as it stands I think this is a pass for us. It is not terrible, but it definitely does not hold my interest enough to spend time to keep watching it. Let us know if it gets better if you keep watching Ghosted!

I will admit the first episode of The Orville did not reel me in to the show. It was not bad, but it was not good either. There were definitely a few points that made me chuckle, but overall it felt like the blasé day-to-day life that we know now set in the future.

Now maybe I had my expectations high as a fan of Star Trek and Galaxy Quest, but this is definitely something a little bit different. The problem is that I am not sure that it is as good as either of those, which is almost what you have to be at this point. You can be different, but space exploration has been done by a couple of shows and you have to somehow bring something new to the table. I am still not sure that The Orville has completely given me that, but the third episode has shown me that it has more to offer than originally thought. Now the first episode is alright, the second episode a little painful in my opinion, and then the third episode you have an episode that kept me engaged and interested the entire time. At this point the general verdict is we are going to keep watching, but it is on thin ice. (Potential spoilers for the first three episodes of The Orville.)

END_OF_DOCUMENT_TOKEN_TO_BE_REPLACED

The Problem With Omniscience

So I recently read an article discussing the choice of the show runners for Game of Thrones on how to deal with Bran as the three eyed Raven with being omniscient. Omniscience is a powerful ability for anyone to have and can cause problems with storytelling if not treated appropriately. On Game of Thrones they chose to make the character less relatable on a human level. Trying to make him stand-offish from other characters so they don’t simply ask him how it will out turn out I guess.

Of course this is not the only limitation that they have provided for him. Even though Bran can technically see anywhere and any when, it is so much information that he does not have it all necessarily at his finger tips. With the season finale reveal we find that Sam still had to provide information to Bran for him to ultimately see it. This means that he doesn’t have instant recall even though omniscient.

This provides some structure to a power that could ultimately destroy any potential story because the character has the power to tell people exactly what will happen. It can also be used as lazy story telling if you write yourself in to a corner.

See All Tell All

So obviously the first problem with omniscience is that because you see all, you know everything that has happened and everything that will happen. So why wouldn’t you tell people what happens? Of course this is where often storytellers bring up the fact that knowing the future can change it. So the question is if you know everything, then you also know whether saying anything will make any difference. At the same time from a storytelling perspective even if they do reveal everything the only person who might be ruined is the reader because they know that they are telling the truth when other people don’t.

The other problem is that omniscience can be used as a crutch. I don’t necessarily have an example of this, but I could definitely see it being a thing. Where as soon as you have an omniscient character then suddenly the challenge can just die, but it also means that if the writer or storyteller paints themselves into a corner it is something that they can use to pull themselves out because the omniscient character can just come in and fix everything because they know everything. Which can take a tense complicated situation and just deflate it in an instance.

The thing that is actually more interesting is when you have people trying to work around omniscience. Where there is a character who is mostly omniscient and somehow another character finds a way to outsmart them. Omniscience as a thing to thwart becomes more interesting then it being used to uncover everything. Omniscience is such a difficult trait to give a character because if they really know everything at all times then they are kind of boring and life can get kind of boring for them. That can make it difficult to make the story interesting if you don’t have some limits to the ability to know everything.

We live in an age when technology keeps trying to one-up the last hit thing. This works not only for legitimate technology for the masses, but also for people who might be taking illegal actions.

Recently there has been an interesting increase in robocalls to people who had previously signed up for the no call list. The problem is while legitimate businesses will follow the no call list, the scammers and any illegal business is not going to follow that law. Now with all the different technologies they make it easier for these groups to make call after call with no way to track where the call is coming from.

This is just one example where probably the new technologies can make it difficult to prosecute someone. In some ways we see this complication all the time with online harassment with no way to track the perpetrator – often there is nothing that can be done. The technology that we use and have access to outpaces so many of the laws that exist in this digital age. END_OF_DOCUMENT_TOKEN_TO_BE_REPLACED