Guest post by Leah of The Lobster Dance, a blog about Japan, gender, media, and culture (with a heavy dose of manga and geekery) and I’ll Make It Myself!, a food blog.

People assume that time is a strict progression of cause to effect. But actually from a non-linear, non-subjective viewpoint it’s more like a big ball of wibbly-wobbly timey-wimey… stuff. — Doctor Who

“Wibbly-Wobbly, Sexy-Wexy”…: sexuality, like time, can be looked at from a “non-linear, non-subjective viewpoint.” —Anything That Loves, based on a comment at Comic Con

My taste in comics has always run a bit queer*of the center. If a comic has a sword-fighting woman or an androgynous character (or both at once if you please), I’ve probably read it. And much to the horror of misogynist nerds who think nerd girls do it for the ships (and what of it?!), the one thing guaranteed to get me interested in your superhero features is a queer love story. Why? The introduction of non-heteronormative romances often means that both the character and the general narrative are far more likely to break out of gender norms regarding romance. 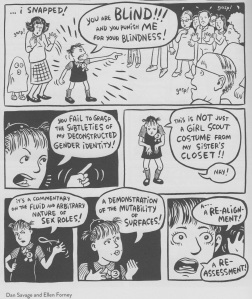 Furthermore, I (and many others, I suspect) have a theory that we seek out and stick with media that show us a reflection of ourselves and a reflection of our desired future selves; the tropes we return to over and over are a rough guideline to where we fit into the broader narrative of our lives.