So, since we’re traveling soon, I was looking for some additions for mobile gaming for the trip. Free games are nice, as are pass-and-play games. There’s a new app for Pandemic, and we’ll have to report back about that later. There’s also pass-and-play for Ticket to Ride now, and more options now for Small World. So we’re excited for these.

A free one I had downloaded but not actually tried was Avengers Alliance. This game was originally on Facebook, it seems, and so has a massive in-game store. But I’ve played Infinity Blade, and had a friend playing it and when he bought gold, he was disappointed because all it did was decrease playability – the game is in the unlocking. So the store shouldn’t be an issue, right?

I’ve played a bit of this game over the weekend, and I want to tell you about it – and then I have to ask, have any of you played it? I could use some input. So if you play Avengers Alliance, in particular, read on and let me know!

So the first thing I ran into was that this game requires a constant Internet connection. So I could make the post really short by saying that this game fails the test as a mobile app to travel with. I had downloaded the game on my Wifi iPad and then was trying to play it away from home – it gave me a chance to try out my iPhone’s mobile hotspot capabilities.

Then I realized I should instead play the game on iPhone, to always have Internet… and instead of being cloud-based and saving my progress (even though the game was clearly connected to the Internet, you’d think this would be an advantage), I had to start over. So I did, I wasn’t far in.

Then I saw there was Nightcrawler available (see my post about Nightcrawler here and it makes sense…) and decided, hey, a couple of bucks to get Nightcrawler will enhance my enjoyment of the game. And, okay, it has. Got him for $5, but then, I should be able to get the rest through the game system, right? Play to unlock. That’s a thing.

So, part of what I wanted to look into with the game was the Infinity tie-in (check out my thoughts on Marvel’s Infinity here), and unlocking Black Bolt. Unfortunately, the Special Operation I had access to was a Halloween sort of one, to unlock Ghost Rider. Well, Ghost Rider is cool, so I started working on that, as well as the main plot.

The game works on a number of resources, the first of which is Energy, for fights. You have 60, and pay 10 to do a fight. It regenerates at what seems like a fight (10 Energy) per hour, or else when your character levels up. The latter has kept me going when I was thinking I was about to have to stop for a while. This system very clearly reminds me of a Facebook game – designed for you to play a little bit in-between checking out other things on Facebook. I played a Heroes-based game like this. Whatever, I can play a bit and then walk away, right? Keep unlocking things?

So then, playing in the Special Op, there is a second resource you spend, which does not come back. But I started with like 450, so that’s plenty, right? Well, I’m down to about 60, and only about a quarter of the way to Ghost Rider. Hmmm, luckily, I can get more by doing adventures, right?

So I paid a few more dollars, and got a few useful characters (who happen to be Illuminati… coincidence?). You can send characters on individual missions, sometimes specific ones are required. From a roster of tons. But Mr. Fantastic and Doctor Strange seem like great additions to the team, right? And sending them on missions unlocks useful things, right?

Except, when you’re done with these missions – or when you defeat a boss – or when you get a daily reward – you have these resources as an option. A random option. Among nine options. And while useful stuff seems to be there, mainly, I seem to get basic items instead.

Basic items which you can get using in-game currency, the only easy-to-come-by resource in the game.

You can see my depressing resources counts at the top.

Then there’s the Gold, an option in the random rewards, and something you get one of every time you level. There’s SHIELD points, which you need for most purchases of items and upgrades, and for each time a hero levels. Then there’s Command Points for buying heroes. The obvious way to get all of these is in the random rewards at the end of a fight. Which, in a few days at least, have not come up with my number.

What I Think The Game Is Really Going For

So, there are other ways to get these. You can buy Command Points for Gold (which I did to get a couple of characters… I got 4 for $15…), and you can buy SHIELD points for Gold. And you can buy Gold for real money. Does it feel like they’re going for you slowly, with micro-transactions, spending money? Yeah, probably. 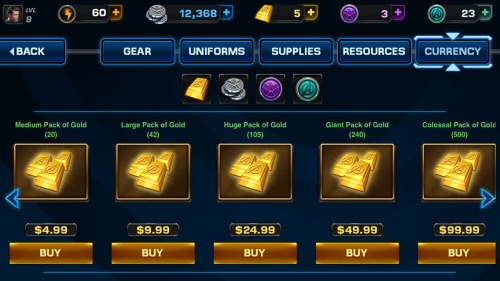 A new take on Cash for Gold…

SHIELD Points, meanwhile, you can get through social networking with other people who play the game as well. There are options for connecting with your Facebook friends, with people in your Game Center, and people who are part of the community. I guess this is the purpose behind being always online? You can always get help from your friends, then, or something.

It looks like you can ask your friends for help in a fight, give and receive gifts, get SHIELD Points, and “employ” your friends as crew on your quinjets, to fly off and get more of the in-game currency that’s so easy to get.

But really, is it all just a system for you to invite friends to join you, so that they get more people spending real money for the in-game stuff? Because the game is not kind in giving you things. They’re there, it’s possible, it’s dangled in front of you… but not probable.

So Do I Keep Playing?

There’s some fun to this game. The heroes, and their abilities. The combos of the heroes together, then, although they’re only good for experience. Experience I can’t use because I’m out of SHIELD points. My main character is level 8, and my heroes are level 2.

Wow, I can’t even bring myself to write one paragraph about this game that ends well. I don’t believe I’m going to be able to keep playing – I will at one point not be able to win the fights anymore with my level 2 heroes and higher-level PC and enemies. I am committed to not spending any more money, but even with 25 days left to get him, I don’t think I’ll be able to get Ghost Rider, and it’s all just going to fall apart.

One thing that might keep it going, that would help, is having other people I know playing. But I don’t know anyone. And not playing on Facebook, I’m not directly connected with people playing either, nor to the free rewards it sounds like they offer on Facebook. But I wanted a mobile game.

So I guess, my recommendation is: don’t pick up this game, it’s not built for playability, but for making money. And my question is: have you or do you play this game? How have you coped with its deficiencies? Or did you give up too? Let me know in the comments below.