So recently I wrote a part 1 about prophecies in fiction – mainly in Fantasy. Prophecy is a frequent plot scheme in Fantasy, playing a big or small part, and generally about the main character and/or the main plot. The prophecies are generally old, and predate the plot itself – often causing the plot, as the villain takes action based on it (like Harry Potter), or else just pointing to our main character as a chosen one.

That all sounds a lot like the Bible, full of prophets and prophecies of the Messiah. And thinking of villains taking action based on the prophecy, I referenced that as well (via the Inhumans) – Herod, killing the babies to try to kill the Messiah. All of which to say is that these prophecies in Fantasy have a strong cultural connection to the Judeo-Christian tradition. We’re rarely following the action of the prophet themselves – which is some of what makes Dominic Deegan so much fun! 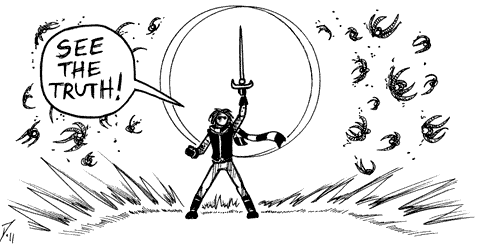 In Science Fiction, however, it seems like if there is prophecy – which is rare – you often get to meet the prophet as well. And here, prophecy is less supernatural, and more explained in science – in a quantum way, or a mathematical one. But when it comes to prophecy in Science Fiction, there’s one that stands well above the rest as an example – and which has a lot to say about religion as well. And that’s Dune.

Invented Religion and Prophecy and Dune 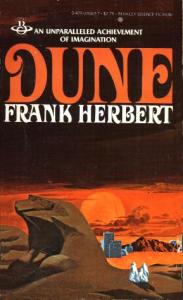 Yes, in most of Fantasy and Science Fiction, the religion you see is an invented religion – created by the author (*cough* Scientology *cough*). However, in Dune, it’s a layer deeper – the religion in Dune is created by characters, by the Bene Gesserit sisterhood. They planted prophecies around the universe so that, if a sister was ever in need, she could invoke the religion and use it to shield herself.

Which is what happens in Dune, with Paul and his mother Jessica on the run – they invoke the old prophecy of a chosen one boy and his powerful mother. However, as they fall into these roles, they come to find that just because the prophecy is invented does not mean it isn’t true…

Because the Bene Gesserit had also been working on breeding themselves a Messiah, someone to step in and claim the power of their invented religion. Which happens, but not under their control.

It helps that they’re sitting at the source of the mind-enhancing drug, the spice Melange. It helps that they live because of the invented religion. It helps that 99 generations of breeding went into Paul. In inventing their religion… the sisterhood may have done too well. They created their own god – and his son, the eponymous God Emperor of Dune, would rule for 3,500 years. And their god-like power? Visions. Future sight. Prophecy.

On Being the Kwisatz Haderach

When we try to understand an all-powerful God, it can be hard. We use these big, powerful words like omniscient, or omnipotent. You rarely see a character in fiction getting these sorts of powers, although a couple come to mind. One is Jafar, in Aladdin. He becomes an all-powerful genie, but the power is so new to him and he’s so drunk on it that he can still be defeated by the heroes. The other is in the old Secret Wars, which I read recently. Someone gets the power of the Beyonder, and it’s so much power that they fear even to sleep – because their dreams could shift and change the universe.

Too much power for mortal hands. And those are more examples of omnipotents, all-potent, all-powerful. The knowledge is there too, but receiving that suddenly and sifting through it to do anything useful with it… that would take a lot of time. Time that these villainous characters don’t have in these examples.

From the old EMP Science Fiction exhibit. It’s been redone since this.

However, in Dune, Paul becomes basically omniscient without any of the all-powerfulness. So he uses knowledge as power, uses his understanding of the workings of galactic politics and economy. He uses addiction – he uses the spice. And he controls access to it.

But still, that’s just plot. What’s interesting here is more in the details of how he sees the future. Because trying to understand what it would even be like to see the future is like trying to peer, for a moment, into the mind of God.

And what Paul sees is options. Possibilities. Major decision points. Today, we would say that he sees things like Chaos Theory and alternate timelines. And using all that future knowledge, charting different paths – all of which does take him a lot of time – he sees that the weight of past decisions is already too much. No matter what he does, some things are going to be inevitable – the Jihad that is unleashed on the universe at the end of Dune is inevitable. The best he can do is ride the wave of it.

A character who can see all these options, all these things happening, but only has the power to influence them through his own actions is interesting. Because even as the most powerful man in the universe, he only has so much power. He can only do so much to people’s hearts and minds. The fact of his existence is nearly enough to cause a Jihad – but for there to be a Jihad, there have to be unbelievers too. And the invented religion runs away from them…

Some of the question as well is what would it all have been like if the Bene Gesserit had indeed been in control of the Kwisatz Haderach? If the people who planned for the chosen one had actually been pulling the strings? Could they ever have controlled one such as this? 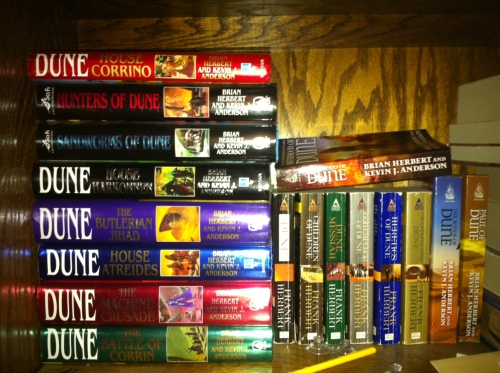 So if exploring the idea of future vision tells us one thing about an all-powerful being, the later books – especially God Emperor of Dune – tells us one other thing. Paul’s son, Leto, ends up a second Kwisatz Haderach, and does things his father was unwilling to, leading to an unnatural long life. Still, power mainly through control of the spice.

The interesting thing with Leto – and his long life – is that it’s only interesting if he can be surprised. He spends huge amounts of time looking, not forward in time, but back into the past. However, he hardly ever looks at the future anymore. He doesn’t look too specifically, or too much at this own life. Which again, would take time to explore and consider.

Something new. Something surprising.

So while I’ve focused on Dune for Science Fiction and prophecy, it’s worth mentioning a few others. There’s ones like Star Wars, that function pretty much just like Fantasy ones, and that I mentioned last week. But there are others.

One is The Matrix. I think it can stand in probably for a larger number of stories that I probably just don’t know. And that is, stories that are Just Like Dune. I think you especially see it in the later two movies, as Neo starts having visions, seeing the future. As he goes blind and becomes a blind prophet who can see. As he loses the woman he loves. That’s all Dune Messiah right there. 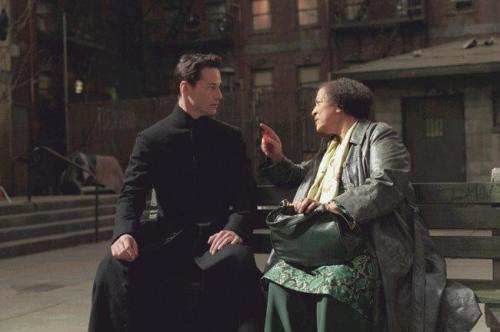 The other prophet in The Matrix is the Oracle, and thanks to Patrick Sponaugle in the comments of the last post for making me think of her as well. If it’s a story Just Like Dune, then she is the Bene Gesserit plan, creating the prophecy of the chosen one while also setting things in motion to create the chosen one. And as we come to find out, she first predicted this through mathematical deduction – the anomaly. And that Neo is not the first One. So it’s a pretty easy prophecy by the time we’ve gotten to the movies. Still, she’s definitely a Science Fiction prophet – actually alive and in the plot, and using science and knowledge to be prophetic.

The other good Science Fiction prophecies to consider would be Battlestar Galactica, at least the new series (don’t know about the old one). Part of what was so great about Battlestar was how, with most of humanity gone, they still tries to keep the heart of what it was to be human, to have society. They had government, and the political aspects in the show were strong. And they had religion, as finally the old religious prophecies suddenly made sense.

I’ve been wanting to rewatch Battlestar Galactica and in many ways it could merit its own blog post(s). The short version for here would be to say that in Battlestar Galactica, like I’m sure again a number of stories I don’t know, they are trying to resemble our life today, the here and now.

In a lot of Science Fiction, everyone has moved on from religion – it’s outdated or old fashioned or just plain been disproven by, say, aliens. But in some, like Battlestar Galactica, yes they’re in space – but life isn’t completely different. We haven’t “moved on.” So there are believers, and doubters, and atheists, and people using the religion to their own gain, and even – and I loved this – mysteries that are hard to explain any other way. A lot of these were centered around Starbuck, and I like how they never give a solid answer on the how and why of her overall storyline. Because that’s a way to faithfully represent faith: we just don’t know. That’s why it’s called faith.

Alright, that’s a lot of me talking – what do you think? Is Science Fiction a good way to explore how an all-powerful being would work? Are there other good Science Fiction prophecies? Let me know about this or anything else you’re thinking in the comments below!