On Hugos, Puppies, and Remember that blog post I wrote…

If asked, I’ll tend to answer that one of the more important things to me is the idea of science fiction, fantasy, and the related speculative fictions being taken seriously. I think I expressed that best so far in my Realistic vs. Romantic Literature post.

I bring this up because one of the things that I feel like ought to matter for these sorts of literature to be taken seriously would be for their awards, at least, to be solid. For at least the fandom, the people who do care and who do take it seriously, to keep it together.

Which is why I have been so disappointed in the controversy over the Hugo awards. Because I want to see the Hugos taken seriously. Because I often turn to the Hugos to figure out what I should read – and I imagine others do as well. I’ve even thought of recommending the Hugo award winners as a complete set that should be held at the library. I want this to be a list of titles that matter.

For a full rundown on the controversy, I would recommend this Wired article. I read that, and it was pretty darn good. Covered a lot of the history of it, a number of good interviews on both sides. However, one of the saddest things to me was the extent to which even Wired was down on Science Fiction. Calling it a “maligned literary sub-genre” and talking about how the mainstream media barely touched it. Well, I’ll let you read it. 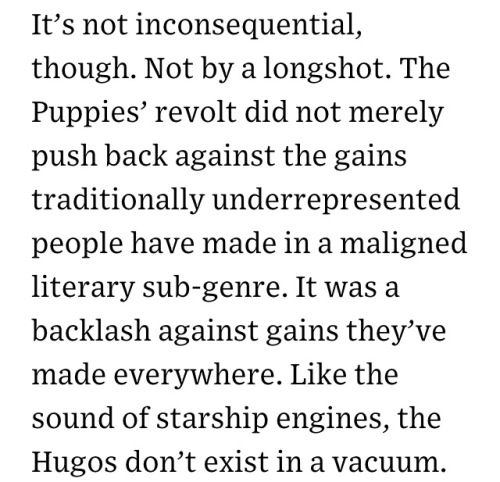 To even talk about it that way, for it to be the representation of the genre… sigh.

Meanwhile, Puppygate (ugh, can we stop calling everything -gate?), to a great extent, reminds me of the gaming gate we mentioned recently – and I think the videos we linked there apply really well here too. Even to the point of there being a more mild group that’s being used, and an extreme and strategic group using them. Which worked out kind of like this: 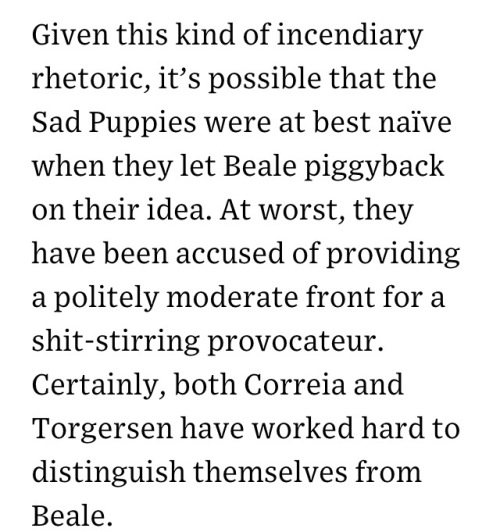 I think it’s pretty awesome how many people turned out, and how many awards were actually not awarded. That there were people who declined their nominations. Because new ideas matter. Because representation matters. And because quality matters. And spiking a ballot – in any direction – doesn’t help with those things. It’s science fiction – a diversity of ideas is kind of the point.

Or, to close out with one more Wired quote: 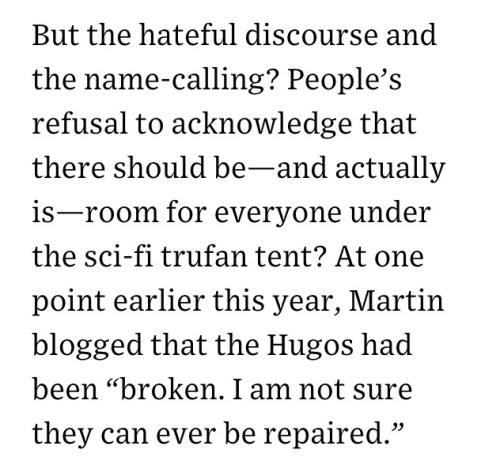 That would be Martin, George R.R. Who held a losers after party, because he’s that awesome.

What do you think? Let us know in the comments below!