While there’s now rather a lot about Sandman here on Comparative Geeks, it’s not a comic series that either Holly or I had read before. Not from a lack of interest – for me at least, it had to do more with figuring out where and how to jump in. There’s so many editions and reprints at this point, giant collected volumes and such… 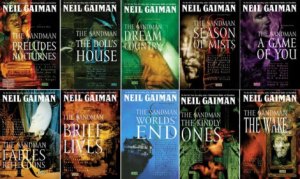 Even getting it from the library like I did, I had the option of the smaller trade paperbacks, or the much larger Absolute Sandman. Deciding (accurately) that I probably wouldn’t be reading it super quickly (#GeekBaby), I got just the first volume, titled Preludes and Nocturnes.

I don’t feel like I have a whole lot to say about it, especially as there is much more in-depth Sandman discussion elsewhere on the blog. So let me spend a moment to reflect on my experience as a first-time reader of this comic, rather than hashing out the comic itself.

END_OF_DOCUMENT_TOKEN_TO_BE_REPLACED

Posted in Catching Up, Comics