And here we are, the last part of my reviews of Marvel’s Daredevil – the all important season finale!

The last show of the season kicked off with Ben’s funeral, which was incredibly sad. Karen and Mrs Urich spoke briefly, and the chat helped to appease some of Karen’s guilt. Ben never got pushed into anything. He was a reporter. I enjoyed the sense of closure to Mrs Urich’s storyline, the fact Ben had made arrangements for her to be taken care of.

Matt and Foggy finally made up. There was a little tension at first, because of the fact Foggy missed Ben’s funeral. But he explained the work he’d been doing with Marci, and together they decided to use the law to take him down. I’m glad they resolved their differences, because the show isn’t the same without their light-hearted banter.

They spoke briefly with their friend on the force, Brett Mahoney. But he had little to tell them, as Ben’s place had been wiped clean. Brett’s scenes have been limited during this season, but I’ve enjoyed his interactions with Matt and Foggy. He wasn’t particularly thrilled when his friends pointed out he’s the only honest cop they know, especially as the honest cops are usually the ones to die! As part of the same scene, Matt overheard two cops talking about Hoffman and learned Fisk’s men were searching for him.

Karen, who was thrilled the gang were back together, helped with the search. She found a discrepancy in one of the records – a building which was recorded as sold, yet the profit margin remained the same. Matt asked for the address and left to chase it up. Foggy was concerned about where it would lead, but understood they would lose Hoffman if Matt did nothing.

Matt was just in time to save Hoffman. Fisk’s men had already killed his guards at the safe house, and were closing in. The firefight was brutal. But a lot of it was told from Hoffman’s point of view, who had his eyes squeezed tightly shut! Matt basically gave Hoffman two options, which boiled down to either turning over evidence on Fisk, or facing Fisk’s next team alone. He made the right choice. With Matt as backup, he went directly to the station and turned himself over to Brett Mahoney. He then gave his testimony – naming the cops, judges, lawyers, and at least one senator who were all in Fisk’s pocket.

After discovering a discrepancy in a financial report, Fisk confronted Leland about it. Leland tried to brush it off, though the fact he was sweating in the cold, and shaking like a leaf, kind of tipped Fisk off. He finally admitted to being behind the poisoning at the benefit, dropping all pretence and using Hoffman as the ace in his hole – his exit plan.

Of course Fisk couldn’t let him get away, not when he hurt Vanessa. So he unleashed the beast, and threw Leland down an elevator shaft.

Having failed to find Hoffman in time, Fisk made arrangements as he waited for the FBI to arrive. Vanessa, who was shocked by all the arrests broadcast on the television, managed to keep it together long enough to listen to Fisk’s instructions. Minutes before the FBI arrived, Fisk proposed to her.

The gang celebrated their victory, toasting to those they had lost. It only ramped up the tension for me because, clearly, they were counting their chickens.

When we next saw Fisk he was in the back of an armoured vehicle; still coolly indifferent as he shared a Bible story (The parable of the Good Samaritan). I won’t repeat it, but it’s worth mentioning because I loved the symbolism. Fisk has finally accepted who and what he is. Not the Good Samaritan as he once thought, but the ill intent. 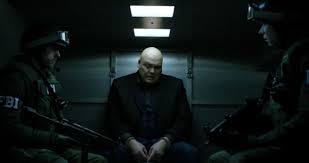 As he neared the end of his speech, the tension was mounting outside the van as his men tried to break him out. Once free, Fisk walked casually through the melee, giving the order to take out anyone on the ground or in the air, should they try to intervene.

When Matt heard the news, he knew exactly what had to be done. By that point the anticipation was killing me! The moment arrived at last and Matt got himself a new suit. And how fantastic did he look, stood on the roof as he listened to the sounds of his city? 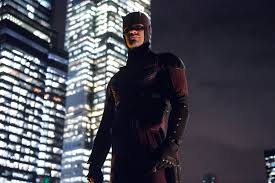 Meanwhile, Fisk arrived at a warehouse and was transferred into a new vehicle as his men prepared for extraction. He spoke to Vanessa (who was waiting by a helipad), and told her to leave if he didn’t arrive on schedule. Fifteen minutes from the drop zone, the van was hit. It tipped over, but Fisk managed to crawl out – mostly unharmed.

Matt was stood on top of the van, all kitted up and ready to go! He told Fisk he’d been right before, when they spoke on the radio – not everyone deserves a happy ending. All Fisk managed to mumble was an accusatory, ‘You!’

Fisk managed to slip away when one of his men shot at Matt, and set off running down the street. I was surprised he gave up so easily, but then he probably realised his window of opportunity was closing. In any case, he didn’t get very far. Matt was waiting for him when he ran into an alley.

Their fight was violent and bloody. At one point, Fisk held Matt above his head, like some kind of pro wrestler, and threw him to the ground. To add insult to injury, he then took one of Matt’s sticks and started beating him with it.

This time, though, Matt wasn’t half-dead from fighting a ninja, and Fisk’s rage worked against him. Matt fought his way back (he’s a Murdock after all), and managed to immobilise Fisk as the police arrived. Brett stepped forward, a little bewildered, and asked how he should refer to him in his report. In response Matt thanked him, before climbing the fire escape like a monkey on speed. And the name Daredevil was born!

The following day, Foggy fixed their sign to the wall, using a familiar joke, which was a nice touch – ‘avacados’ at law.

After Foggy left, Matt tried to talk to Karen about what was bothering her – something he detected in her voice and which hadn’t gone away. She admitted that, though they had put Fisk away, it didn’t bring back Elena or Ben, or erase what they’d had to do to get here. Matt told her the only thing they could do was move forward. Together.

The finale ended with Fisk in a cell, staring at his painting, I mean, the wall – just like his good old dad taught him!

What did you think of the finale? Do you like the new suit? Am I going to have to start referring to Matt as Daredevil now? I’d love to hear from you.

NB: Images used within this review are the copyright of Marvel Entertainment/Netflix. All rights reserved.

Hope you enjoyed this last of five reviews for Marvel’s newest show, Daredevil! This was by Mel and you can find her on her own blog, or reviewing Arrow over on Sourcerer!