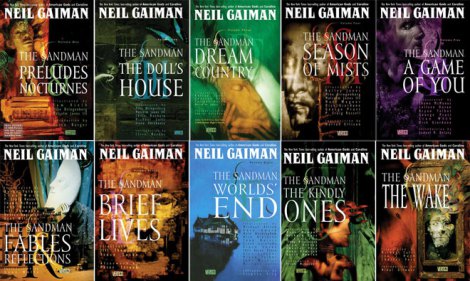 The Thursday 13 is a meme that Part Time Monster does often. I enjoy writing them but don’t have the time to do them every week. When I agreed to blog about Neil Gaiman’s Sandman series here back in February, I decided to sit down and write a few of these.

1. Hell — Described as a warped reflection of The Silver City. Visually, it’s a horrific landscape of twisted flesh with rivers of various bodily fluids. Dream comes into possession of the Key to Hell at an important point in the series, and it has diplomatic repercussions. Death describes Hell as “the most valuable piece of psychic real estate in the universe.”

2. The Necropolis Litharge — The ultimate mortuary. An entire city on another plane devoted to disposing of its clients’ remains in a dignified manner according to their last wishes. The citizens are apprenticed from a young age and those who don’t develop the skills to qualify for citizenship are sent out across the worlds to become great morticians. Citizens sleep on stone slabs, are fed by offerings from clients, and are clothed in garments left behind by the deceased.

Denizens of Litharge performing an air burial. Image via Comixology.com.

3. Faerie — Just Faerie. It isn’t featured in many issues, but I love the artwork and the denizens. It’s connected to various other planes by portal stones which can only be activated with the consent of the King and Queen of Faerie.

4. Fiddler’s Green, aka Gilbert — Described as the heart of the Dreaming. Originally, the place where sailors who die at sea go (though possibly much older). A lush, green place populated by animals where music is forever playing. Incarnates itself as Gilbert and has an adventure in the waking world early in the series.

5. Nowhere — This is actually a place. There’s a panel in Brief Lives in which Dream and Delirium are traveling, and they’re standing together against a white background. Delirium asks where they are. Dream replies “Nowhere.”

6. Destiny’s Garden — The bulk of Destiny’s realm is garden with ever-branching paths which everyone walks. Every decision everyone ever makes represents a branch in the path. The centers of all the labyrinths that ever existed or ever will intersect in the Destiny’s Garden.

7. The Earth of Boss Smiley — Featured in a stand-alone story in World’s End. Boss Smiley is the prince of this Earth, and functions as both God and the Devil. He’s drawn as a man in a suit with a huge smiley-face head. He has a Heaven which people go to after they die and sing his praises.

The Threshold. Image via Comicvine.com.

8. The Threshold, the Fortress of Desire — Desire’s realm is a Fortress surrounded by empty mist. The fortress is a colossal statue of Desire himself/herself with accurate internal anatomy. It’s described as having eardrums the size of ballrooms. The circulatory system is corridors, and you could wander them your whole life without once re-tracing your path. Naturally, Desire lives in the heart.

9. The Library of Dream — An important part of the Dreaming. Contains all the books that were never written. That’s quite enough to warrant a place on this list.

10. The World’s End Inn — An inn that belongs to no world, where travelers take refuge when something so cosmically huge happens that it sends ripples across time and through the various worlds which disrupt the order of things. Having taken refuge, the travelers then tell stories to pay for their drinks.

11. The Land — A dream-skerry. Basically, a self-contained dreamworld represented as an island just off the Nighwtward Coast of the Dreaming. Setting for much of A Game of You. Dream functions as its creator deity.

12. The Soft Places — Places where the Dreaming touches the waking world. The center of the Gobi desert is one such place. Mortals can get lost here and wander for centuries without aging. Dream comes to the Soft Places to think from time to time. He encounters Marco Polo here at a pivotal moment early in the series, and an exiled Chinese civil servant in one of the final issues.

13. The Realm of Despair — A realm of mist, with rats scurrying around under foot, hung with endless mirrors. The Realm of Despair is the space behind every mirror. Despair of the Endless peers into the mirrors and whispers to people in moments where they are trying to decide whether to recover from some catastrophe, to lose all hope, or to take their own lives.

Want to join us for #SummeroOfSandman? Here’s how: Write a blog post about Sandman between now and Aug. 1. Long or short, any format. Share your link with us on a Sandman thread here or on Twitter using the hashtag #SummerOfSandman. It’s that easy.