Achievement Unlocked: Top 10 Things From the 90s That Live on in Japan

In August of 2014, Vanity Fair published a somewhat captious article on the boom of 90s nostalgia as a directive for pop-culture. While James Wolcott’s tone borders on condescending, he does offer an interesting quote from social critic Christopher Lasch:

Nostalgia appeals to the feeling that the past offered delights no longer obtainable.

The 90s were the first decade immersed in the digital content world, meaning that they were also the first decade recorded in a format with no expiration date. The 90s are to the Internet what the Renaissance was to Art. And due to its influence on the way we share and experience pop and geek culture today, it is no wonder that the material things it brought into the world bring on a sense of nostalgia. Things will never be as bright and beautiful in that very special, 90s way, ever again.

Unless you live in Japan.

Japan is an interesting paradox of culture: both ultra-modern and ultra-traditional elements coexist seamlessly in all areas of life. They are known for their video games, their abstract commercials, their technology, and their long-spanning history. In this amazing time warp of culture and space there are no better odds for the weird and the wild pieces of the 90s to find an immortal home, and not always for the better. 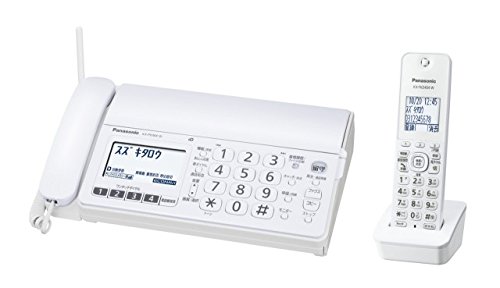 This bit of technology was a godsend in the 90s, but quickly outgrew its usefulness when email and scanning equipment came along. However, the fax machine is alive and well in many parts of Japan, sometimes with no alternative.

Walk into any convenience store in Japan, and you’ll see a wall of batteries in every size imaginable. Not only that, you’ll also see stacks of burnable CDs, which only leads to this:

Discmans, or walkmans, are still a thing over here, but they don’t come cheaply.

By the 90s, DVDs had happened, but there was some lag among companies still offering VHS options for their customers. Back then, it made sense, and with movies like The Ring, VHS had its own cultural value. But fast forward to 2013, when I opened the box for a new sewing machine I’d ordered online. There wasn’t an instruction booklet, but there was a VHS tape.

Gee, now if only I could find a VCR!

In the 90s, stickers were an obsession for many girls and boys, whether you were sporting Lisa Frank, scratch n’ sniff, or holographic collections from Mrs. Grossman’s. While you can’t find Grossman’s or Lisa Frank, there seems to be unending supply of scented and unscented stickers in Japan. Sticker binders, roller stamps, and temporary tattoos are all also still a thing. 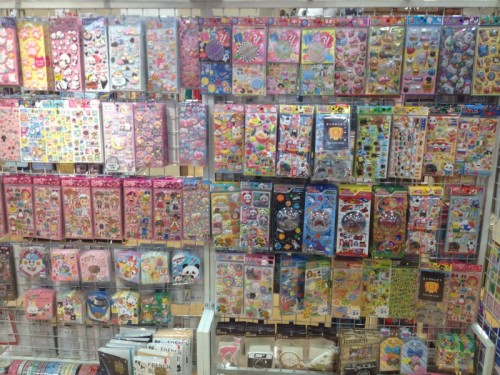 This is just one shelf in one store.

SNES and coin arcades were the points of entry for many who would later become gamers on Playstation, XBOX, and Nintendo. And while those companies do dominate the market with their newer hardware and software, Japan hasn’t done away with a good ole’ fashioned arcade. As many as three can exist in a single neighborhood, sporting capsule machines, crane games, and old school racers.

In addition to electronic games, the 90s had its fair share of fun ‘tactile’ toys, including slinkies, Pokémon trading cards, and Furby: All of which can still be found in Japan. Yes, even Furby.

Capsule Games to the next level.

Another staple of the 90s: Whatever would eventually be known as “not PC”.

Who didn’t have to untangle a slinky at some point? For the record, they’re only 60 cents in Japan.

Trading cards in the candy aisle. Pick your poison, between Monster Hunter, Yu-Gi-Oh, and Pokemon, which are still actively played all across Japan.

You know what happened to me in class last week? A student interrupted my lesson so that she could take care of her dying Tamagotchi. A third grader. Tamagotchi are alive, well, and expensive in Japan. Gone are the days where you begged your mom for a Pikachu-tama, and she only spent $15. Tamagotchi start at around $40 USD, and now have accessories, linking stations (for special downloads), and color screens.

First page when searching for Tamagotchi on Amazon

Link station for Tamagotchi at a curry restaurant.

Hear the first three notes of the Sailor Moon theme song and you’re stuck with it until the end. Sailor Moon marked one of the first cartoons marketed towards girls in animation history that also attracted boys. We can be thankful DiC never got their wish to turn it into a live action, but the impact of the Sailor Scouts changed magical girl cartoons forever. Though the show is in the middle of a watery revival, its competitors are going strong, with one show sporting over a hundred teammates to obsess over.

Precure, a show whose cast changes faster than American Idol.

Speaking of shows with catchy opening themes, what kid from the 90s can forget The Mighty Morphin’ Power Rangers? And clearly Japan hasn’t forgotten them either, with new seasons of the show still in production. Hey, if you really want to go retro, you’d skip Power Rangers all together and check out Ultraman, which is also currently enjoying a new season.

Ultraman is older, and still more popular, however.

Glow sticks, light-up sneakers: if it emitted a neon light, 90s kids had to have it. Out of fashion now, except for party-goers, glowy things saw an unfortunate decline in the U.S. after the 90s. Not so in Japan! In fact, Japan has upped the ante on several old favorites, even making light-up skirts.

Why not get some light-up shoelaces while you’re at it?

I heard you like light-up shoes, so I… nevermind.

Japanese fans have made an art out of dancing with these.

Light-up yo-yos, in every dollar store near you.

Wristbands? Scrunchies? Parachute pants? How about neon, abstract patterns on every article of clothing? While these fashions have died out in the U.S., here in Japan, everything from gold foil to belly shirts are making a comeback:

90s design for the modern girl.

Why stop at gold, when you could go full Jem on this mess?

A modern variation for the serious man.

Evidence as to why the fad died out.

Wristbands, and slappers, are still happily worn by children in Japan.

Wristband on a whole new level.

There were some other things that didn’t quite make the list: I found RingPops in a store the other day, a student made me a cotton-thread friendship bracelet, and stationary is collectible here, and I’m sure there’s still more.

What do you miss most about the 90s? Me? I’m just going to keep on living the dream.