If you didn’t know, NBC has created a new show called Emerald City, which is a reinterpretation of the Wizard of Oz. When I first heard about this show I was curious because the world of Oz is definitely a familiar and interesting place for stories. The 2 part pilot episode caught my interest, but felt a little rushed. Now that I am on episode 5 I can definitely say that I am hooked.

The first couple of episodes definitely felt like they were trying to move past the pieces of the story that everyone knows and just dive deep into the craziness that is Oz. They change the story in fairly interesting ways and make the story much deeper than expected. The other piece that makes for an expanded universe is that the story is not just about Dorothy, but about an ensemble cast of characters all with different flaws and motivations. There is just one mystery after another to unfold.

Getting Past the Obvious

Now the first two part episode definitely felt a little rushed, but after getting past it the rush makes some sense. They were trying to move past the standard checks to get to Oz and start the adventure.

So we meet Dorothy who was abandoned as a girl with the Gale’s, which definitely feels suspicious. When she tries to go visit her estranged mother of course is when the tornado hits and suddenly she is in Oz, riding in a police car with a dog (so Toto). The Witch of the East gets hit by the car and assumed dead. Now instead of being praised Dorothy is tortured because apparently only a witch can kill a witch in Oz. By the end of the episode we have met the “Scarecrow” – a soldier who was left for dead and doesn’t remember who he is – and are on the way down the Yellow Brick Road. We have also met Glinda, the Witch of the West, and the Wizard all in the 2 part episode and it moves quickly.

The different twists and the different characters from Oz is actually fascinating. Glinda and the Wicked Witch of the West are actually sisters, apparently all the witches in Oz are considered to come from the same mother. The mythology that they present is very deep, but the interesting part is that magic is now forbidden in Oz. There is an odd balance between the Wizard, who banned magic, but saved the Emerald City, and the witches. The “Tin Man” is a boy who almost died and was saved by replacing the majority of his body with metal. An interesting thing in Oz is that they believe in magic, but not science, so when presented with science they read it as magic. It makes for some interesting moments with Dorothy – who knows science.

I feel like for every reveal the show introduces another mystery. I mean the original mystery is who was Dorothy’s mom and why was she abandoned. Then there are many different characters who appear to be more than they seem. The three biggest power players all seems to have plans within plans and so far I am not sure what those plans are. In the most recent episode there was a predictable reveal, but it does open up a whole other line of intrigue to explore. The nice part is even with the ever-growing mysteries they also do keep answering some of the questions along the way. At the same time it will be interesting to see where they end up on the show.

Why I Love Tin Man

Now some call it a re-imagining of The Wizard of Oz, but that is not entirely accurate. It is looking at a world that we know, but in a different time. The characters are fantastic and part of what I love about the story is it is not about finding love, not even inadvertently. It follows the original Wizard of Oz because it is about finding out what home means. (Spoilers for Tin Man after the jump.)

Not a Love Story

So something I appreciate so much about this story is that it is not a love story. I feel like so many times Hollywood decides that there has to be some sort of love interest in the story when there doesn’t have to be. This story never even hints at a love interest – there are too many other wonderful, mystical things happening. The focus is both on the family we have through blood and the family we create for ourselves. The connections that we show in stories do not have to be a romantic one.

Similar to the original Wizard of Oz, DG gets dropped into Oz and through a variety of events is eventually traveling around with the scarecrow (Glitch), the Tin Man, and the cowardly lion. They are an unlikely group of traveling companions, but they learn to trust each other without having to fall in love.

I absolutely love that the emotional resonance of this story for me is the story of the two sisters, DG and Azkadellia. At first it seems that it is two sisters battling each other, where it is the good sister and the bad sister. As the story progresses we get to see that it is more complicated than that.

We soon learn that the older sister, Azkadellia actually ended up possessed by the original Wicked Witch of the West partly because DG got too scared and abandoned her. This leads to an interesting point where at first DG feels like she has to defeat the evil ruler, but then discovers that it is actually her sister, which initially complicates matter. Then she ultimately discovers that it was kind of her fault because she abandoned her sister in a moment of danger out of fear. It was a turning point that lead to the situation that they are in. Ultimately DG would risk everything to save her sister, which is a position that I think many siblings can connect with.

Everything I Want in Oz

The other piece that is just amazing is simply the new Oz that they build. We get to see Oz as we have never seen it before, which is sort of down and dirty. It is a darker side of Oz than we have necessarily seen. We get to see the city life, the fantastical creatures and locations. It is a darker side because under the rule of Azkadellia (under control of the witch) it is not a happy place. Places that were once beautiful have been destroyed, and part of the journey is DG discovering that she has the power to restore what was once destroyed. The graphics at time are not always the best, but the concepts definitely make up for some of what is lacking.

In the end the story stills follows some typical elements of the light versus the dark, but I still appreciate so much a fairly original storyline even in a place like Oz that I know. Yes, there is a need for new locations and new stories, but it is also so interesting to revisit a place that we love and make it magical again.

Fantasy Worlds at the EMP Museum 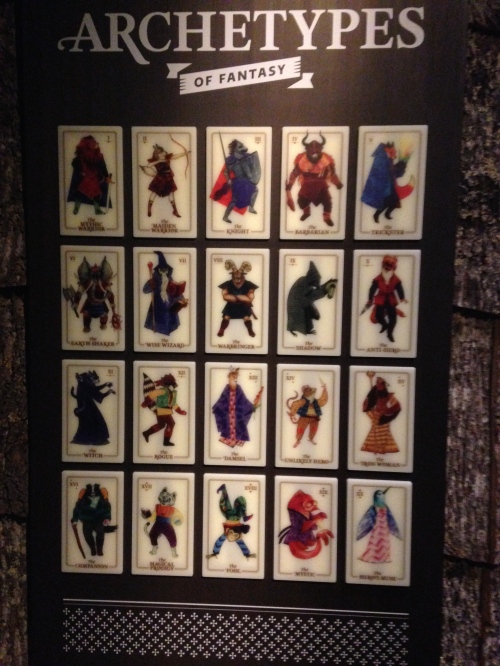 One of the other exhibits we saw at the EMP Museum was the Fantasy: Worlds of Myth and Magic.  I love Science Fiction and Fantasy. Both of these genres have the ability to transport you to an entire new world. I discussed the Horror exhibit yesterday and that was fantastic. The Fantasy exhibit was so much better partly because I got to totally geek out on my fandoms, but it was also a really interesting exhibit. One of the best parts of the exhibit is that you are literally transported to a new world hidden behind a door. The door looks so innocuous and at first we were not even sure if it was the way in and not just a display. Then you open the door and it is like stepping through the door to Narnia or running through the column to platform 9 3/4. You are suddenly in a place where magic can happen.