It’s that the politicians are focusing on the problems of the world now, without offering solutions. And he likened it to 1930’s Germany: they had problems too, like the Treaty of Versailles, the Stock Market Crash and ensuing economic collapse, and the state of the world… social and international. And they, like many other countries at the time, had ideologues and demagogues telling them all about their problems, sympathizing with them and empathizing with them and enhancing their anger. But then, not offering the solutions… and once we saw what the solutions were, well, it was too late and time for war.

Which all pretty well sounds like peoples’ opinions on what’s happening in the presidential race today. Anger. Lots of the problems being brought up – and not a lot of solutions being offered. And some of the ones we are hearing almost sound worse than nothing at all…

I was about to write all of this Monday, and we watched Last Week Tonight with John Oliver and that totally replaced my plans… but still, it needs said. We have a world full of problems – wars and civil wars, expansionism and posturing. We have places like the UK – with Scotland considering leaving the country, and then the UK considering leaving the EU. It’s like a nesting doll of a problem… The economy. Immigration and refugees. Water and climate and just everything else.

We’ve talked before about the idea of Wicked Problems – where we don’t have the answer of what the solution is, and you basically just have to try it. These sort of problems end up in the ideological, religious, and especially political realm. Where we collectively work on deciding – work on a solution.

But for that, we need options, and if no one is offering them in the political realm, then it’s time to look somewhere else. And for so many of today’s problems, I still say, Science Fiction is a good place to look. Taking an issue, and thinking of it in terms of the future. And then it’s a question of coming up with the vision of what the time between that future and the present looks like.

If there are political problems you’re wrestling with, drop them in the comments below. We’ll brainstorm solutions in the comments, or if big enough, they’ll get their own blog posts. Let’s work on solutions. Not on problems.

We’ve been kind of quiet about this fact, because we were making sure we could commit to it. We built our list, and we’re doing it! The April A to Z Challenge! If you want to know more about the challenge, you can find out on their website: http://www.a-to-zchallenge.com/ 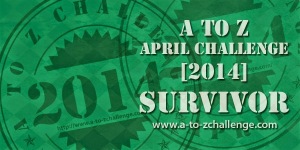 Our Survivor Badge from last year!

We did this challenge last year, focusing on our Character Studies. We blogged about a character a day, from throughout geekdom. There were a few franchises where we could almost have done all the characters from – like Final Fantasy – but we decided on the broader topics as that was more fun and allowed more people to be involved. And involved you were! There are lots of bloggers involved in the A to Z Challenge, and a lot announcing their themes today – find that list here!

END_OF_DOCUMENT_TOKEN_TO_BE_REPLACED

Posted on September 3, 2014 by CompGeeksDavid | 8 comments

I know, I just recommended a new YouTube show on Monday, but I am having trouble getting past the outlining phase on anything else. Maybe because what I’d really like to be doing right now is watching the PBS Idea Channel.

I think that we found this one just on the YouTube home page, as a currently popular channel – I think the video on Frozen. What we found was a clever channel asking clever questions. Cleverly. For instance, on spoilers.

END_OF_DOCUMENT_TOKEN_TO_BE_REPLACED

We like Science Fiction Today because there are so many hard problems today – maybe in all days and times – but that they then get lost in politics, become almost impossible to discuss rationally, and then what can be done about them? This is maybe especially the world of American politics, where everything seems to always be reduced down to a dichotomy, every issue gets claimed by one of the two parties.

I found a theoretical term recently to consider these sorts of issues, and then today there were a couple of SourceFed stories that really pointed to need for people to be thinking and dreaming of what to do in the future – to be building Science Fiction Today. So let me explore, briefly, why I think these posts matter.