With posting this morning about beginning the Astral Chronicles as a webcomic, I thought I would share the posts and experiences that helped get me here. So rather than this itself being an old post, this is a post leading you back to a few older post!

The most important was probably getting to hear Kazu Kibuishi, author of Amulet, talk about the process of being a graphic novel author. And while the easiest thing to say is probably that I’m not at the same point in my writing career that Kazu is… I can absolutely say that he inspired me. Here’s a link to my post, talking through his process and thinking:

One of the important things I got out of Kazu’s presentation was the importance of the book Understanding Comics, a non-fiction comic about comics by Scott McCloud. Really getting into the deep questions of what comics are as a medium – rather than as the sorts of genre that dominate our perception of comics – got me thinking about them as well.

It was in that post that I even fully committed to the idea that I was going to get a webcomic going, as a way to get and keep me writing/drawing, and as a way to serialize the work. Plus it lets me self-publish; if I really get going with this, I have other stories I could do as a graphic novel.

Since we’re talking about Kazu, I think I will also link to our two posts about Amulet. We started reading the series before Kazu came to town, so that we would know who he was and what he was up to – we got hooked and finished the series (up to where it is), and even finished up the most recent volume real recently. Fantastic series, and in the second post I actually talk more about Kazu’s presentation and how he does the work of producing Amulet.

If you’re looking for a great comic series to read, that’s great for all ages (once they can emotionally deal with the idea of death), then absolutely check out Amulet. And if you like comics or want to know what the big deal is, and you haven’t read Understanding Comics, definitely check that out! Also, you can find Kazu on his website boltcity.com, or on Twitter as @boltcity.

Life being what it’s been, it’s taken me a while to finally finish reading Understanding Comics, by Scott McCloud. This had been recommended to me by several reliable sources, like GuestGeekBrian, and Kazu Kibuishi. And how long it took me to get to and read it should be no comment on this book either for how important it is nor how good it is.

Because it is quite simply one of the best, most important books I have ever read.

In short, this 1992 book attempts to explore the art form of comics at the very core. What it is about comics that make them comics, and not just drawings, or picture books, or illustrated literature, or really any other medium or thing – they are their own thing, described in the singular and plural as “comics.”

Along the way, he argues against any thought that comics are intended for only a specific genre or genres; the comics are only for a specific age group; or that comics are not art. He also takes an international approach, with the most specific and compelling difference being Japan and manga (see also: Tezuka). He also takes a historical approach, defining comics back far enough in time that he hit on a topic near and dear to my heart: but more on that below.

I feel like I could talk for a long time about this book, but it would be far more efficient for you to just go and read it! Hopefully like it was for me (or for Kazu before me), this book should be available at the library. Of course, I only had to get it at the library because I finally returned Brian’s copy to him, unread… And I won’t need it from the library again, because I’m definitely buying this one to reference later!

But anyway, allow me to briefly hit on some of the major definition points of comics, hit on that historical connection with my own research, and finally speak a bit about how this book informs discussions on this blog, and in my own life.

END_OF_DOCUMENT_TOKEN_TO_BE_REPLACED

Last week I wrote quite a rant about comics, and about how I don’t find them to be a bad thing. I tried to also stress the point that this hasn’t made me blind to the state of the world, doesn’t make me a child. Well, somewhere in the process of writing the rant, I got it all pretty much out of my system. 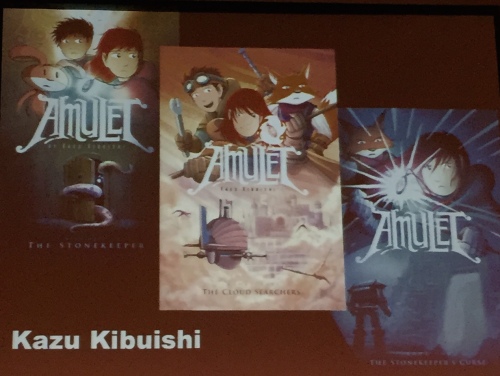 Which was a good thing, because the next day, I had the opportunity to see graphic novelist Kazu Kibuishi presenting on “Making Comics and Graphic Novels.” And I pretty much came at this with my mind clear, which led to five and a half pages of notes (taken on my iPhone no less). There’s no way I can include all of the insights from Kazu, so at the very least, I need to pretty much leave myself out from here.

Kazu is known for a number of his different works, including as the editor on Explorer and Flight, the cover artist on the 15th-anniversary covers to Harry Potter, as the author of the webcomic Copper and the author of Amulet. His work is exploding in schools right now, but I have been far enough removed from those that I had not heard of his work until I knew he was coming. So Holly and I have been reading Amulet, as Holly mentioned, and it’s pretty amazing. It’s sad to think that it’s not done yet (volume 6 came out recently, out of a total of 9), and we’ll have to join all the other fans now in waiting for new issues! But it will be worth it. So allow me to explore the world of comics and graphic novels from the perspective of Kazu Kibuishi!