Welcome to the Comparative Opinions podcast! This week, hosts David and Holly dive into Guardians of the Galaxy Vol. 2. They start with no spoilers and reactions from the trailers, and then head into the full movie with lots of spoilers. Then it bleeds into expectations for the upcoming Marvel movies, especially Infinity War since it’s going to include the Guardians!

Posted on May 21, 2017 by compgeekadmin in Podcast

The Nine Alignments of Guardians of the Galaxy

On our poll of what we should do for an alignment grid, the top result was the Marvel Cinematic Universe. Well, I tried to come up with one for the MCU, but that is a tough nut to crack. A lot of characters, so how to pick?

I didn’t pick yet. Instead, I did one just from Guardians of the Galaxy. I hope you enjoy.

For more of an explanation of alignment grids (and for several examples), please check out this post. And if you have comments on this one, or ideas for a Marvel Cinematic one, let us know in the comments below!

Relationships in Guardians of the Galaxy

David and I saw Guardians of the Galaxy yesterday and loved it! David is going to look at how it did compared to the comics, so I will let him talk more about reviewing all the various elements. 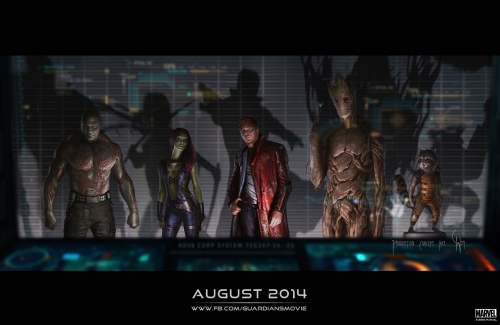 There was one thing that really struck me about the story and that was the way the various relationships presented. Now obviously this is about forming the group as a whole, but some of the interpersonal relationships between the various characters is part of what helps bring the various individuals to life. The relationship between Groot and Rocket is a great example of friendship. Then there is the great way they handled the interactions between Gamora and Star Lord. There were so many directions they could have taken the stories, but I think they handled all the relationships really well. (Minor spoilers for Guardians of the Galaxy after the jump.)

END_OF_DOCUMENT_TOKEN_TO_BE_REPLACED

Guardians of the Galaxy on the Mind

For one thing, though these comics are where the movie team come together, there’s also about a dozen more characters who work with or on the team throughout this run. Really, it’s only in the really recent comics that the core team matches the movies – likely deliberate on Marvel’s part.

So if you want to know what’s up with that team, I did a post on that a while back that seems relevant today. However, for a few thoughts from the comics – and for what they need to do in the movie – read on for some of my musings!

END_OF_DOCUMENT_TOKEN_TO_BE_REPLACED

Geek 501 – The Guardians of the Galaxy

If you were like basically everyone at the announcement that Marvel was releasing a Guardians of the Galaxy movie, and asked yourself who they were – then this post may be for you. I do not profess to be an expert on this comic or these characters; indeed, I was just as confused at the announcement as the next geek and comic reader.

Marvel has recognized this and is doing what they can to introduce the characters to people who are interested. And even for those only mildly interested, they’re structuring their trailers to show the characters as well. So I thought that they were ripe for introduction. The basics are here in the trailer, but below, I’ll give a bit more on each character!

Marvel has been sharing information about these characters in two main ways – one in the movie trailers, and there’s one for each character. The other way is through the comics. This is a pretty young group – the current configuration only started in 2008. So they recently did a bit of an origin or character point story for each, leading up to the start of the new run of the Guardians of the Galaxy. So I will consider both of these, and recommend both to you if you want to know a bit more about the characters!