Meme Monday – How to Present a Fail

The Internet picked up where shows like America’s Funniest Home Videos left off, in the wide world of recorded fails. It’s always amazing to me that a) someone caught the fail on video in the first place, and b) that they then shared it widely with the world. But they did and they do, and we can watch and enjoy from there.

Thanks to the Fine Brothers, there are two types of fail video memes that I’ve seen lately, and which I thoroughly enjoy. They end up a little different from each other, but also pretty similar, so let’s give them both a look.

These tend to be fails although I suppose they don’t have to be. Basically, an awkward pose or movement is captured from a video, turned into a repeating .gif, and sent hurtling across all of time and space. Often into what looks like the quantum space from like Ant-Man or Doctor Strange, as well.

And always with that same song (which I believe is called “Shooting Stars” so there you go).

The way that this meme tends to be framed is you get to see the start of a video, see the move that becomes the shooting star – you odyssey across creation – and then you return to the original video to generally find out that it was a fail video, and someone gets hurt or something funny happened.

Because it’s the same music, and often the same backdrops, I don’t find this one to be a super re-watchable sort of meme. It’s amusing, it has a good setup, but once you’ve seen a few you’re set.

It’s To Be Continued memes for the first half of this video.

Again, these tend to be fails, but even moreso don’t have to be – in particular, the compilation that they watched in this video wasn’t as many fails. Basically, this meme shows the start of a video, up to either a funny moment or, more commonly, something just starting to go horribly wrong – and it freeze frames and cuts to the “To Be Continued.”

And always with the same song (and graphic). Though to be fair, it’s for a much shorter time than for the Shooting Stars meme. The song is longer than is normally used, so sometimes with longer videos I’ve seen them start to play the earlier bit of the song, as you build up anticipation to the moment when it freeze-frames.

Although I’ve seen a couple where they do, almost none of these videos show you what happens next. And I actually find this some of the charm of these videos – they leave it to your imagination to fill in the rest. The React channel has been showing some challenges lately where you try not to move, because you want to flinch or look away. Some of these To Be Continued videos might be of the same sort, except that the potentially worst part happens after the freeze-frame.

I’m okay with not seeing the limbs break, or the final hit as someone crashes, or whatever awful thing happens – however, the leadup to things going wrong? Turns out, I enjoy watching that. And maybe you will as well. I’ve found this meme to be much more watchable, and may have binged quite a few compilations of these videos…

Which meme do you prefer? Is there another fail video meme that you like? Let us know in the comments below!

I mean, if I can’t tell you to enjoy this movie, how about a bunch of other folks?

We’re hoping to catch this opening weekend, something we haven’t done with a movie in a while. But it just looks so good and we don’t want to miss it. And I mean, it’s the DC Extended Universe, so we should be concerned, right? 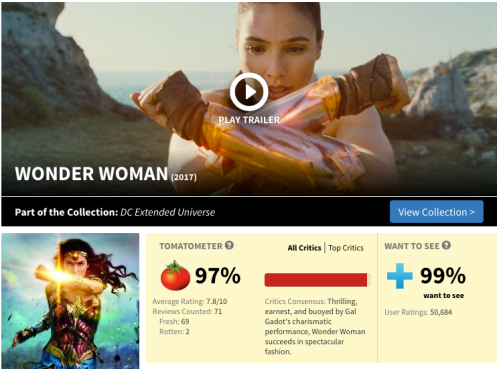 Maybe DC has finally done it. If there was one movie they needed to nail it with in their whole enterprise right now, it’s Wonder Woman. Meaning, nicely done DC. But I mean, they’re normally just fine, right? It’s just that I’m a Marvel fan…

It’s really looking like there’s something “there” with this movie. And we couldn’t be more excited for that.

Are we just getting too old?

It’s always a question people seem to ask as they get older… am I losing track of the culture? Do I no longer understand those young folks? Holly and I had that question with a couple of videos recently from the React Channel.

We didn’t really know much of the slang… we didn’t know the songs… man, are we just out of touch? Has it finally happened? I mean for one thing, the Internet does a good job of keeping us all connected to the culture. Especially the slang. Although the Internet has made it even easier to cut out the radio completely… so where would I run into music I’m not interested in?

The other thing that I wonder about… when I was younger, would I have known these things? And I feel like maybe the answer is no. The music isn’t my genre, and I think I’m more into movie quotes than slang… So maybe it’s nothing. Maybe it’s just a couple of videos like this in a week’s time.

Maybe they were going with more obscure things to see what happened on the video?…

Yeah, probably not that.

No, we haven’t bought a Nintendo Switch yet. Though we have discussed doing so. Perhaps in the hope of not making ourselves too excited for a game we otherwise would not be able to play, we haven’t looked up gameplay videos, or even trailers – though we’ve seen things indirectly, through looking up the Nintendo Switch itself. Having the new Zelda title as a release game seems like a good plan, and having it be a really really good Zelda game would of course help. Which seems to be what’s happened…

I mean, we watch most of the React Channel videos, so when we saw it was Zelda: Breath of the Wild, I pushed for us to watch it. Dang it! That game looks absolutely great! The idea that this is a console-selling game looks to be completely valid, especially when you add in the potential for other interesting and good games down the line.

Something we had not at all realized until watching this video: this game is far more of an RPG, or JRPG, than previous Zelda titles have been. Watching Link collect clothing items, weapons off of defeated enemies, things like that – they’re all strong elements of the RPG video game, but not necessarily of past Zelda games. This both fascinated us and made us want the game a bit more, I think.

Do you have Breath of the Wild yet? Is this game making you strongly consider a Nintendo Switch? Let us know what you think in the comments below!

Do They Know It? And Do You?

We’ve been catching up on things and getting life sorted back out now that we’re back from traveling, and some of that has included catching up on our YouTube Channels. Many of them were on hiatus while we were traveling, but some just keep chugging along. One of these is the Fine Brothers’ React channel.

We’ve mentioned the React channel before, and in many ways I think it’s ended up with more of the shows we end up watching from them than their main channel – all the various “X Reacts” shows (on the Fine Brothers Entertainment channel) are great, but we tend to only watch ones where we know what they are reacting to. But there are whole series on the React channel where we watch every one.

So here’s another of those: the “Do they know it?” videos, where they take a group and see if they recognize pop culture. Generally, it’s the youngin’s and they make us feel old by not knowing 80’s culture, or worse, not knowing 90’s culture.

It wasn’t that long ago, right?