I’ve been playing Assassin’s Creed since not long after it came out. When we moved in together and got our PS3, P was really excited that I had the series and picked it up as well. With being as busy as we are, we’ve just gotten around to the newer ones, only recently finishing the third game and now finally moving on to Assassin’s Creed IV: Black Flag. (We missed the part where Liberation is in between three and four, and will be playing that next.)

The series focuses on the millennia-old struggle between the Assassins (who fight for free will and truth) and the Templars (who fight for world order and control, think Illuminati “New World Order” level). The first three focus on Desmond Miles, a present day Assassin kidnapped by Abstergo in the first and forced to relive his ancestor’s life to discover the location of an ancient artifact left by the supposed “First Civilization.” By the second and third, he has escaped and is working with the Assassins to prevent the end of the world (2012, of course). So far the Crusades, Renaissance in Italy, and American Revolution eras have been covered, each with the underlying conspiracies that these events were really fueled by the battle for control between the Assassins and Templars.

END_OF_DOCUMENT_TOKEN_TO_BE_REPLACED

Kingdom Hearts: Chain of Memories as the Munchkin Video Game

The element that is particularly intriguing (although not always well executed) are the use of cards. The cards are used to generate rooms and to make attacks. David actually points out that there are quite a few elements that are reminiscent of Munchkin and Munchkin Quest and in fact could serve as a great example of how to make a Munchkin Video Game.

END_OF_DOCUMENT_TOKEN_TO_BE_REPLACED 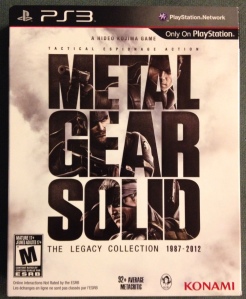 I have finally dived into Metal Gear Solid 4, the game that I wanted a PS3 for way back when it came out. Holly got it for me for Christmas, as part of a collection of all the Metal Gear Solid games. For one thing, I can’t believe how long it’s been since Christmas… for another thing, I wasn’t sure where I wanted to start with the series.

So play through the whole series in release order? Chronological order? Only ones I hadn’t played before? I couldn’t decide, but I knew I wanted to play 4, so I’m playing 4! I wanted to share a few thoughts from this game. Quick review: I probably made the right choice, going with an X-Box 360 for Mass Effect rather than the PS3 for Metal Gear Solid 4…

END_OF_DOCUMENT_TOKEN_TO_BE_REPLACED

After we ended the A to Z Challenge in early May I did a post about how we had so many things to talk about, so many games to play, so many movies to see and shows to watch.

Now we’re in summer, and while the blockbusters have hit (especially a lot of the LitFlix), the shows have ended (even Game of Thrones!), and we have time to breathe. We also have some of the time-sinks in our personal lives past us. So where are we at? What are we up to?

I thought I would highlight some of our thoughts on topics moving forward, and some of the things we’ve crossed off that ambitious list of topics. Onward!

END_OF_DOCUMENT_TOKEN_TO_BE_REPLACED

I feel like we’ve played a lot of video games lately – I think we moved into a video-game phase when we bought a new (for us) console, the PS3. And I don’t feel like we’ve written much about the games we’ve played lately, because we’ve almost moved too quickly through them. We’ve mentioned them in passing, as we’ve started them. Or as we finished.

And maybe that’s okay, as many of these games have been out a while. Maybe the point where talking about them is interesting has passed. However, I’m sure there are many games you, faithful reader, are also considering and haven’t played yet. So maybe we’ll spark a thought for you.

Lightning Returns arrived today (finally!) and I have a feeling it is going to consume our time, and pull us away from other games. Which is too bad, but it also means I kind of want to get these games out of my system before we move completely on! So here’s a lightning round (pun intended?) of the games we’ve been playing lately, my quick thoughts and recommendations on them. Onward!