Where Do You Most Often Get Books?

Something David and I have just been thinking about as we have to make space for a new addition has been what books to keep and what to get rid of. We still at times buy physical books, but more often we will do e-books because there is only so much space. I have to say another thing we have been trying to be good about doing is using our Library more because there are a lot of books that you can get, even if it is not all of them. There are some books that I like to own, but you can end up putting a lot of money into books and I already have a backlog that I have not read yet. So how do you like to get new books to read?

So tomorrow is Valentine’s Day, one of the more overrated holidays in my opinion, but that could just be me. I do love the large Reese’s hearts because those are delicious and used to only be available as eggs at Easter. Now as a kid it was about the fact that everyone got a card and I would often would make cards by hand because I enjoyed doing that sort of thing. As I have gotten older though the whole holiday seems a little ridiculous. For one thing I do not need a special holiday to show my husband I love him, I try and do that at least a little bit every day. Also, Valentine’s Day seems to have this idea around it of putting pressure on any relationship that does not match up to an idea of what Valentine’s Day is going to be about. So with that in mind I want to know what your plans are, do you go all out or are you more of ignore the holiday is happening altogether sort of person. Or you could be like my friends and I did in college and turn to violent action movies on the day because that is just fun.

Should we go see Jupiter Ascending?

Our plan for this weekend was to go see the new movie by the Wachowskis, Jupiter Ascending. This movie was originally slated for last summer, and got bumped back to this weekend, in a hum-drum time in February. Not generally the best sign.

But some of it is that they seem to have increased the special effects, which for a science fiction movie like this is probably a good thing, and they’ve made the movie look pretty good, at least visually. Like in this trailer:

Ouch. Not sure what we think of that, so we’re asking you: should we go see Jupiter Ascending?

There has been talk for a while now about a new Fantastic Four movie, although not much more than there is going to be a movie and here are the actors. Even though they are coming out this summer they did not even put forth anything at last year’s San Diego Comic Con. Now suddenly we are finally getting a trailer, more of a teaser, about the new movie. So I know I have my opinion, but I am curious what everyone else thinks. Are you excited about the movie? Do you need to see more before judgment? Or are you over the whole idea of a Fantastic Four solo movie? Watch the trailer, vote in the poll, and leave a comment letting us know what you think.

What Would You Like to See an Alignment Grid of?

One thing we would like to do more of are alignment grids. They’re fun, they’re popular, they fit a lot of thought into one image, they get found on the Internet a lot. They also seem like a perfect sort of thing to put together for a Friday fun post – they take a lot of work, but once you have it, there’s not much else to say.

If you’re not sure what I’m talking about, click here for the original post we did with these. After the poll I’ll link to several we’ve already done.

Just some thoughts off the top of my head from worlds big enough to solidly do the nine D&D alignments… probably… without forcing anyone. It’s a fun thought experiment to make, but you help us decide which to do! And links below for ones we’ve already made!

Oh, and why not… here’s the first one! 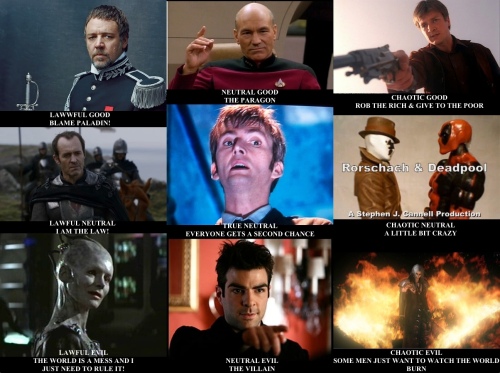