Obviously this is continuing in the grand tradition of end of year best of overviews. David did his yesterday and pointed out correctly that this year has not been quite as productive as last year. Although this year has also been a big year because the arrival of Geek Baby made this an exciting and interesting year. When we did have time this year we were able to consume a few things and so with that in mind here are my “Best of 2015”. END_OF_DOCUMENT_TOKEN_TO_BE_REPLACED

Editor’s Note: this is by one of our contributors. David is currently contemplating and planning on a modified NaNoWriMo himself – where a picture is worth a 1000 words. Literally.

I feel like at least fifty percent of the time when I mention to people that I write/want to be an author/need to work on my writing discipline, they ask me if I do NaNoWriMo. The answer, until this year, has been a hard pass.

This is the first year I’ve even kicked around the idea. Which I’m realizing I’ll need to settle on in…like…three days. For once, I’m not employed or in school. I’m currently not employed because I want to give my writing a fair shot…and now that I’m more settled into our new apartment, I definitely could. My husband is at work all day, and I could literally sit with my lovebird on my shoulder and just write. I even have a story I’ve been developing that I’m certain I could easily start a draft on. I’ve been meaning to force myself to write daily and make it an actual routine, much like a 9-5 job, and I think this would be a great way to get into that habit and schedule.

Yet even with all of those wonderful positives for why I should do it, I’m hesitant to try.

I think I don’t like the social and competition aspects. Just me, personally, but I hate talking with people about what I’m working on. My husband peeks over my shoulder and asks what I’m doing and I clam up. I’ve tried discussing ideas with him before, and I turn into this shy awkward creature who literally buries my head under blankets and pillows. I realize that’s something I need to work past, especially if I want to publish novels and have anyone anywhere read them (which I do), but it’s harder for me than I thought, even with someone who loves me unconditionally and supports me being a writer. The idea of having strangers cheering me on while writing is off putting. The idea of having other writers judge my work in discussion while they work on The Hunger Games 2.0 gives me anxiety, and I obviously have a bit of a judgment issue with the idea of talking with other people about their work. Plus, I’m an awful cheerleader. ‘Go Sportsball’ or whatever…

Also, I don’t feel like I want to “win” at writing 50,000 words. It doesn’t guarantee getting published, it’s not a full novel and it will still take several months if not longer to edit and flush it all out… Getting a badge online that says “you won NaNoWriMo” is not exactly a slot on the New York Times bestsellers list. I’m not an incredibly competitive person, and I don’t think I’ll want to be until I actually am competing for a spot on the NYT bestsellers list (move over The Bible, I’m coming for your longest running streak record!)

I think a bit of me is curious to try it though. As I said, maybe it would actually create the discipline of “writing is my job and I do it from 10-3 everyday.” Worst case scenario, I make an account, try it for a week, find out it really isn’t for me, and I don’t get a participation/victory badge. Boo Hoo.

Does anyone else do NaNoWriMo? Any thoughts, advice, disagreeing ideas? Any random comments on how Mona Lisa Sapperstein is the woooooooooorst?

Parks and Recreation, with Gifs

I absolutely love Parks and Recreation. For anyone who knows me, the first conversation I had with my husband when we met was about Parks and Rec. I had just started watching it recently, and had actually watched some with the friend who introduced us, so it came up.

Mostly what came up was the awesomeness that is Ron Swanson. Interestingly enough, though he became one of the most popular characters from the show, he was only meant to be in the first season. One of his best contributions? The Swanson Pyramid of Greatness: 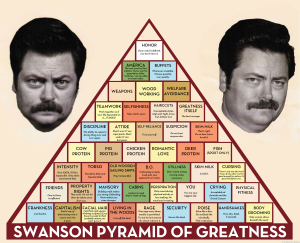 But really, the show isn’t carried by just one or two characters, and that’s what makes it amazing.  Amy Poehler as Leslie Knope is fantastic as a feminist, driven civil servant who cares maybe a bit too much about everything. Honestly, if the show had just focused on her, I’m not sure how well it would have done. It really is the ensemble cast that makes the show what it is.

One thing that constantly strikes me as amazing, and what stuck with me when I just watched the series through again, was how the romances are handled.