So in watching some of my other ABC shows I kept seeing ads for the new show American Housewife and it looked funny. The premise seems to be a stay at home mom dealing with all of the ups and downs of being a stay at home mom with three kids. The ads looked mildly interesting and a good half hour comedy can be nice to have in the back pocket for a quick show to watch.

Thus I decided to give the show a shot and after the first episode something just rubbed me the wrong way. At the same time I know that pilots can sometimes be a bit different so I decided to watch a second episode, and while there were still funny moments the show still just rubbed me the wrong way. I think I pinned it down a bit and it just seems a little overly negative for my taste. Now maybe over time it will get better, but after two episodes I don’t know if I want to give it more shots.

One of the first things that I realized is that throughout the episodes there just ends up being this us versus them attitude. Now some of the moms are skinny and dress alike and are kind of cookie cutters of each other. They will make somewhat underhanded compliments sometimes, but it almost comes across as the main character thinks that people are talking about it without proof that they are. Instead she often sneers at seeing these moms and ignores people who are just trying to do their job and seems to constantly act put upon. It just ends up feeling a little bit like playing the victim because she lives in a town that she doesn’t quite fit in. Instead of owning that she doesn’t fit in and not caring, there is just a lot of repetitive negativity, which is just not what I want in a show.

Feeding Into and Breaking Stereotypes

Throughout the show there has been an interesting concept of simultaneously trying to break and feed into a variety of stereotypes. It is great to see a family that is normal and that breaks some of the typical stereotypes. There is still a little bit of the doofus husband, but it definitely feels more of an equal partnership. He even encourages her to go back to work if she wants, since she had graduated with a marketing degree and her old job offered her her job back. She decides that she prefers to be a stay at home mom, but I feel like it does not explore why you might go to work. Instead saying that her raising her kids is more important than her job, which implies that if she worked that she would not be raising her kids somehow. There are other examples of this where it is like two steps forward two steps back on some things.

I think the other problem that I am having is the fact that Speechless is so good and so much more positive. In at lot of ways the family on Speechless is so dysfunctional, but they know who they are and accept that. They do not care what other people think of them or their family and the conflict is the mother who is overprotective of her children. There is never a feeling of an us versus them mentality, but just the journey of being who you are and working in the world. American Housewife on the other hand seems to be a lot about each of the kids are doing something wrong and the other moms are terrible people, etc. There are funny moments, but the other moments just bring the whole mood of the show down.

There are better 30 minute sitcoms out there that this just does not seem worth the time for me. Now maybe I am looking too much into this and if I was in the same situation as the mom I would find it more humorous. I don’t want to diminish the fact that it is okay for a stay at home mom to question what she is doing and to have insecurities, but it is a little difficult to watch a show that seems to focus on that. I just feel like there would be a better way to show an all American family.

On Feeding the Trolls

There’s a pun in that title…

I’ll try to keep this at a level that you can follow without playing the game, here goes! So, end of last week, the Chain Attack Warmachine and Hordes podcast I listen to got to talking about the toxic negativity in the community at large, in particular the online community. What, negativity in an online community??? you say. Yes.

There’s always been negativity, I mean, it’s the Internet and a game and these things happen. However, with the new edition coming out and changes to near everything in the game (small or large), there’s a whole new level of negativity. Memes were spawned, like #threeyearsofplaytesting (from their statements that they spent three years on the edition, generally used to talk about something that isn’t perceived as balanced), #designspace (a common phrase they used to explain why some things were changed), and a whole group dedicated to memes about how bad a whole faction was… a faction that’s now getting a heavy set of errata coming up in January. 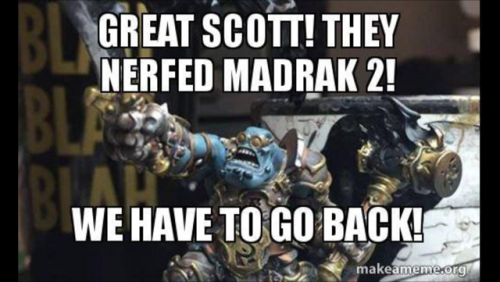 This one’s more my style…

Anyway, the podcast was basically… hey guys, if you really think it’s that bad, try a different faction. Try a different game. Take a break. Walk away from the online communities. Whatever you need – but if it’s all just negative for you, there’s no need to just feed into that further. With something like a Forum, you have to choose to go there (and it’s all sub-forums, too, so you can easily go to one section and avoid another, if there’s one thing you’re happy about and one you’re upset about). You choose to listen to a podcast. Even some of the more passive things, like Facebook groups, you can actively leave.

So with all of that floating around my head, I maybe, sort of, went and started a thread on the Trollbloods Forums asking the question, “Do you really feel like it’s that bad?” I had been noticing that there was plenty of negativity and constructive criticism, but only a few who were more directly “trolling” the threads and spreading toxic negativity. Three main ones I’ve learned to just ignore the comments from. And then there’s one other, whose whole gaming group has basically moved on from the game and he’s upset and still posting, but it’s tough – he has a blog, he’s a volunteer for the company, all these things. He’s one of the people who got me into the faction, with his blog and guides, and it makes me sad.

But by starting a thread asking basically “why are you here spewing negativity when you could just walk away?” I was kind of literally just asking the trolls to come out of the woodwork (see? pun!). I was feeding the trolls.

One of the three main Forum trolls bit, and he was all over the place. I noticed something I hadn’t seen before – his Forum signature, which reads

Someone PM me after the game gets fixed.

Like, doesn’t that read like someone who’s stepping away? Saying PM (private message) me when things are better? And instead, he keeps jumping in and derailing threads by saying things are bad and we’re deluding ourselves to think otherwise. And also saying that the company is doing things bad/wrong/stupidly and there’s no hope for improvement. A perfect candidate for stepping away.

Well, after engagement by the rest of the community, things got well out of hand… and the thread got closed (but at least not until after I had gotten one final say!). Which is, I suppose, what happens when you feed the trolls. When you confront them and say, “troll, why for art thou trolling?” it turns out what you’re likely to get is a trolling response.

The hope, though, is some introspection – if not of the main trolls, then, well, for others. For those who are just dissatisfied and have nothing constructive to say. I know that Chain Attack got me thinking about how I don’t feel positive about my Convergence of Cyriss army right now – I’ve boxed it up, and I’m waiting to see how the future shakes up before I get back to it at all. And so I removed Convergence from my Forum signature, I’m staying away from that sub-forum, and following my own advice. It’s all Trollbloods from here – and I’m having a blast with them!