After talking about human-looking alien supremacy in Farscape and human-centric Cyborgs, I will speak about heterogeneous, albeit very human, bands of space misfits.

Where Farscape showed a multi-species main cast, even as the series evolved and made for several character turnovers, not all Science Fiction shows have been so willing to do the same. Farscape‘s precursor, Babylon 5, also provided a strong multi-species main cast throughout the seasons, especially with strong protagonists like G’Kar, Delenn and Kosh. Such franchises take into account how likely it is that space travel leads to encountering alien species, even if humankind was originally able to propel themselves into new territories by themselves.

While humans can be the core of a narrative arc, it seems surprising that fictional universes involving space travel as a primary aspect would reduce the interaction to human ones, but it is the case in some well-known fictional universes.

A fan favorite despite its short lifespan, Firefly, is an example of human-centric band of space misfits, who for the most part, chose to work together and coexist from the beginning. Though the franchise has a strong multicultural aspect of current civilization, it still remains all about humans – even the Reavers pushed back at the edge of space. Indeed, these are humans who returned to a savage state and even have cannibalistic ways.

As for the more recent Dark Matter, it also emerged as a strongly human-centric universe, with yet another band of space misfits – actually prisoners – thrown together, in a way much more akin to Farscape in terms of main cast’s premises.

Both Firefly and Dark Matter introduce a diverse cast, including in terms of representation in the lead group. Yet they both remain quite human-centric when the premises themselves could have allowed for a broader approach of world building.

How do you feel about such human-centric universes?

After looking at human-looking supremacy in Farscape, this week I will explore the human predominance in Cyborg representation and ponder on whether Cyborgs should be called Cyb-humans (or any better-sounding variations on that theme) instead of their usual denomination.

Cyborgs are a type of characters I find most fascinating in Science Fiction. I love the idea of technology and living flesh blending with more or less ease, as well as the questions about identity it can bring up. There is such great potential with Cyborg characters.

Yet I find myself sometimes wondering why so many Cyborgs are human looking and specifically mix human and technology parts. It makes sense to have a significant number of Cyborg characters be as such but they amount for a smothering majority. 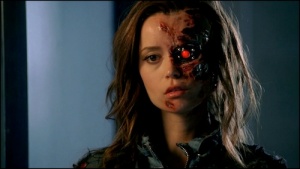 Some most famous Cyborgs emerged either from literature and/or movies. The Replicants from Blade Runner and the different Terminator models from the eponymous franchise have significantly paved the way for later Cyborgs. The latter originally introduced more single dimensional Cyborgs but the franchise then offered more layered ones, even beyond the personal arc of the original Terminator model’s journey. Even the Alien franchise continued to include more androids into their stories, up to the related feature Prometheus.

It is noticeable how these Cyborgs are all a product of human and machine, although the term itself doesn’t require human to be the organic part. Blending cybernetics with alien species would be all the more compelling especially since Science Fiction opens up so many possibilities in terms of world building and character depiction.

Cyborgs even tend to fall on the Caucasian human and machine blend more often than not. The re-imagined Battlestar Galactica in the early 21st century remains one of the few example that included more diversity to the gene pool aspect. Indeed, one of the most important human-looking Cylon models, with two major copies, was Number Eight, portrayed by Grace Park, an American-Canadian actress of Korean origin. A couple other Cylons were portrayed by non-Caucasian actors, including one of the Final Five, Tory Foster, portrayed by Rekha Sharma, of North Indian heritage. Yet, Park’s characters remained the most fleshed out and remembered of these.

Even a currently airing show such as Dark Matter introduced a Caucasian female Cyborg as their ‘Android’. While it is heart-warming to see a fair number of female Cyborgs in the past decades, it would be worth seeing more diversity in the human-based Cyborg landscape, and even greater, to also see alien-based Cyborgs equally involved in Science Fiction universes.

What Cyborg characters are your favorites? How do you feel about an alien Cyborg compared to a human one?

Hello everyone! I am back to Comparative Geeks with a couple of blog series. This first one will focus on human-centric diversity in Science Fiction screen production, primarily TV shows. I am starting this week with a look at Farscape and human-looking alien in its universe.

Farscape was a TV show that gave strong room to diversity of characters, with multiple compelling characters of different genders. This heterogeneity ranged from characters portrayed by regular actors, to ones handled by puppeteers to computer-generated ones. The numerous outstanding female characters are also to be praised in this show.

So what might have been problematic and thus done differently?

The main character, human male John Crichton was often mistaken for a member of a dominant alien species in the area of space he found himself transported to. Their military prominent group, the Peacekeepers, was the most portrayed in the series. A totalitarian and xenophobic civilization, their hatred for otherness was a recurring pattern in the show, even when some then former Peacekeepers learned to think for themselves and evolved in their beliefs.

Other members of the main casts were from multiple alien species, including the later additions over the seasons. Another strong enemy emerged in the second half of the show, with the Scarran species. Another main cast member’s people was also depicted as a potential threat: Chiana’s species, the Nebari appeared in a couple of episodes and their wrath and power were mentioned. Yet the show never got to investigate this narrative path.

The narrative worked well with the choices the writers made. With such a vast choice of alien species to draw from, it would still have been an interesting angle to mix things up some more and not necessarily let the Peacekeepers be as dominant as they were in much of the story.

I personally am a die-hard John Crichton/Aeryn Sun fan and their romantic relationship is a favorite of mine. Yet I can’t help wonder what greatness other options could have brought as well. The show never shied away from building strong cross-species friendships, and even built a strong alien romantic relationship between two other main cast members: d’Argo and Chiana, so why was there the need to keep the lead and the main couple so human looking?

What about you? Was there any other alien species you would have liked to see developed in greater details in Farscape?