Welcome to the Comparative Opinions podcast! Happy Holidays, Merry Christmas, and all that from the Comparative Geeks! Since it’s Christmas we celebrate, we talk about some of our favorite and important Christmas traditions, the sorts of things we really care to continue and pass along to the Geek Baby. Warning: not the most kid-friendly of listens. What traditions do you carry forward?

Posted on December 25, 2016 by compgeekadmin in Podcast

It Isn’t Christmas Without….

We all have our holiday traditions, those things that help to make it Christmas (if you celebrate Christmas!) For me this includes four movies, in particular. I just realized, as I was putting this together, that the most recent one is nearly 40 years old… so I would love to hear what your favorites are – add some more recent movies to my list!

END_OF_DOCUMENT_TOKEN_TO_BE_REPLACED

An Ode to Die Hard

Last year around this time I wrote a post about some of the movie I love to watch this time of year. I was going to do a similar thing this year, naming some of the lesser known or ones I haven’t watched in a while (the animated Nutcracker from the 90s, The Santa Clause) but as I started thinking about it, I realized I mostly wanted to talk about just one.

I don’t know about everyone else, but I kind of feel like 2016 has been a fireball of a disaster of a year. We kicked off the year with David Bowie and Alan Rickman dying. We’re ending it all so exhausted and ready yet also dreading next year…and honestly for me, I need a movie that best captures that feeling right now. But first, the best meme about this year if you missed it:

So really, don’t we all need a kickass movie to finish the year out while also feeling nostalgic about holiday seasons past?

In this movie, we get to see Bruce Willis try to single-handedly save some bank hostages, including his (estranged) wife, from the dashing Hans Gruber and his gang.

Alan Rickman shines in this movie. He makes being bad look so good. This was his breakout role into Hollywood, and fun fact: they added the scene where he fakes an American accent because Rickman’s attempts at the accent were so good while on set between takes, joking around with everyone. What better way to end 2016 than to watch Alan Rickman (who was amazing…thanks 2016) be awesome? I mean come on, just look at this dashing villain:

Besides having an absolutely amazing villain, Die Hard has some incredibly quotable lines, some great action, and classic “’80s-’90s Bruce Willis runs around in a tank top covered in blood fighting bad guys on his own” moments.

A great movie to pop some popcorn, crack open some beer or hot cocoa, and celebrate the holidays while also saying “Yippee ki-yay –” to the end of 2016. This may just be the perfect holiday movie. Or at least, the one we all need this year.

I know I usually do a “What’s Streaming” post once a month, but that really only covers what new, notable additions are coming to different online services. I have a film degree, though, and movies and television are near and dear to my heart. So every once in a while, I find myself just wanting to dish out recommendations based on what I’ve watched recently or what I notice has been on Netflix for ages but only just recently showed up in my recommended categories. This may be the beautiful start of a monthly series.

Anyone who knows me at all will not be surprised to see this at the top of my list. This is my absolute favorite movie, and it’s available to watch on Netflix. This movie takes its story of romantic love gone wrong and flips it on its head by adding the element of science fiction and memory erasure. Michel Gondry directs this beautiful film starring Jim Carrey and Kate Winslet in what I would argue are some of their best roles.

Another of my favorites, this French film stars Audrey Tautou as a quirky, lonely young woman who starts trying to help others through inventive plans and schemes. In the meantime, she almost utterly misses her own shot at happiness and love. This charming film is a great way to spend a lazy Saturday while it’s cold out, if anything for the imaginative and beautiful shots of Montmartre and breathtaking soundtrack.

A much darker recommendation than the two above, this film based on PD James’ novel of the same name is a terrifyingly bleak outlook of the end of humanity, with only a glimmer of hope shining through. The film stays with you; I only saw it once a few years ago, and there are still parts that haunt me. If you’re in the mood for something dark, this is the perfect choice.

I caught this film in theatres because it looked entertaining and there was nothing else to do, and I must say I was impressed. If you’re looking for some laughs at some ridiculous jokes, a hilarious film where everyone is obsessed with a little kitten, and just want to veg out and not think about anything, give this film a shot. It’s great for a few laughs, which is great since we need a bit more levity right now.

A Coen Brothers’ classic, this film features an ensemble cast and is absolutely hilarious. Part spy thriller part what is going on comedy, if you missed this one when it came out, I highly recommend checking it out. See Brad Pitt be thoroughly idiotic, George Clooney be way too into running and other weird things, and John Malkovich be, well, John Malkovich.

O Brother, Where Art Thou (Netflix)

Another Coen Brothers’ classic, this retelling of The Odyssey takes place during the Great Depression and follows George Clooney, John Turturro, and Tim Blake Nelson as escaped convicts trying to find treasure while a determined sheriff tries to track them down. Along the way they become famous after recording a song for the radio and interrupt a KKK rally. This is a definite must see.

Did you miss Deadpool earlier this year? Did you see it and want to see it again? Great news, it’s currently on HBO if you have it! Beyond that…I don’t know if I need to say anything else. Deadpool. Go watch it.

This live-action version of The Jungle Book, directed by Jon Favreau, was released earlier this year and through the new deal with Netflix and Disney, came to Netflix at the end of November. The film is definitely worth a viewing; the film is beautiful, it has some great actors doing the voices, and the young Mowgli is absolutely fantastic.

I was thoroughly impressed by this film when I decided to check it out recently on Netflix. It actually feels more like a buddy cop film than an animated flick, and the story plays out in a sophisticated manner. This film took a lot of flack and criticism for pushing inclusiveness and diversity, but I’d say that’s even more reason to check it out.

A film version of the story of Paddington Bear, I feel I should recommend this movie with a slight warning; if you have very little ones, this is not a movie for them. Spoiler lite reason is that the villain is a taxidermist (played wonderfully by Nicole Kidman) and can actually be very scary, especially for kids who understand that she wants to kill and stuff Paddington. Beyond that, this is a beautiful film about what constitutes family.

Harry Potter and the Order of the Phoenix (HBOGo)

A darker film directed by Henry Selick (Nightmare Before Christmas) based on the novel by Neil Gaiman, this amazing and beautifully gothic inspired stop-motion animated film is a must-see in my opinion. If you love any of the things listed, this is the movie to check out this month if you have HBO.

This classic film is currently available on HBO so that you can relive your childhood and share the nostalgia with your family. Or indulge in nostalgia on your own, preferably with blankets and hot drinks.

This romantic comedy has become a holiday classic since it was released in 2003, and features a huge ensemble cast, including some faces that were newish back then but well known in the geek community by now (Chiwetel Ejiofor, Martin Freeman, Andrew Lincoln, and Thomas Brodie-Sangster). Definitely not for children, this film is a fun way to kick off the holiday season and remember that love is, actually, all around us.

The live action version with Jim Carrey is currently on HBO, and if you need a Grinch fix or some holiday fun, this is always a good watch.

Ready to relive some 90s nostalgia? This Tim Allen classic that sees him turn into Santa Claus after an unfortunate accident Christmas Eve is available on Netflix just in time for the holidays.

This classic film starring Bing Crosby and Danny Kane features all of the classic songs that you’ve probably grown up with. If you need some classic musical holiday cheer, this is going to be a great pick for you.

This irreverent film starring Bill Murray gives a more updated retelling of A Christmas Carol, with Murray starring as a heartless TV executive who is visited by the ghosts of Christmas past, present, and future.

I’m not sure how much I need to say about this classic, except that it’s available on HBO if you have it, just in time for the holidays!

There are a few other versions of this available on streaming, Netflix has one or two, as does Amazon Prime, but if you want the 1947 classic version of this film, it’s currently available on HBO.

Another version of the classic Dickens’ tale, this time told by Muppets! Again, if you’re looking to get into the holiday spirit and love the Muppets, this is a great film to add to the list.

I feel like everyone has a few movies that they want to watch as soon as the holidays come around, movies that maybe they’ve always watched with family as a tradition. In keeping with the holiday spirit, I thought I’d share my list of favorite holiday movies and shows.

No holiday season is complete without watching A Christmas Story. It’s been one of my favorite movies since I was little. It’s an oft-quoted movie in our family, and honestly I can never get sick of it. Also, “daddy’s gonna kill Ralphie…” TBS playing this for 24 hours straight is amazing and one of my newest traditions.

I can’t help it. I love this movie, no matter how many times I watch it, and it’s mostly for Yukon Cornelius. Yahoo! 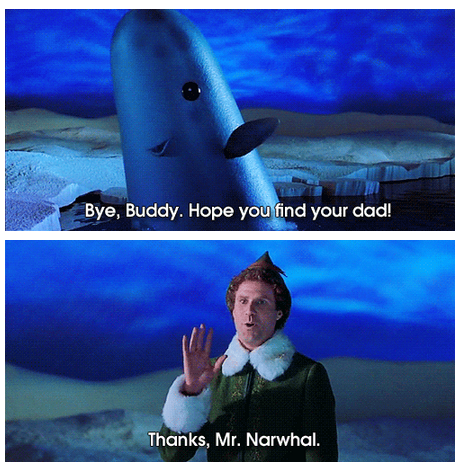 It actually took me years to watch Elf after it came out, which makes me so sad. It’s amazing! Mr. Narwhal is my favorite character, and I may have definitely once answered the phone at my old job by saying “Buddy the Elf what’s your favorite color?”

Also one of my newest traditions. If you haven’t watched Phineas and Ferb, go watch some. It’s fantastic. The Christmas Special is wonderful, and hilarious. And on Netflix!

I’m always confused about when I should watch this: Halloween or Christmas? So I usually watch it for both. But really, it’s definitely a Christmas favorite. Jack Skellington is my favorite Santa.

This is a tradition in our family. We’ve watched this around Christmas for as long as I can remember – and I love it! It’s an absolute classic that is amazing year round – but especially around Christmas!

Happy holidays, and I hope you’re getting to spend time watching your favorite traditions as well!