This is a guest post by fandom correspondent LM, author of The Lobster Dance, a blog about about geekery, Japan, and gender, and I’ll Make It Myself!, a blog with a lot of fandom cakes and gender analysis of food marketing. Find her work on Comparative Geeks here.
My younger sister and I used to play Nintendo together as kids, and now that we’re adults, we can play games together on Steam even though we  don’t live in the same time zone anymore. 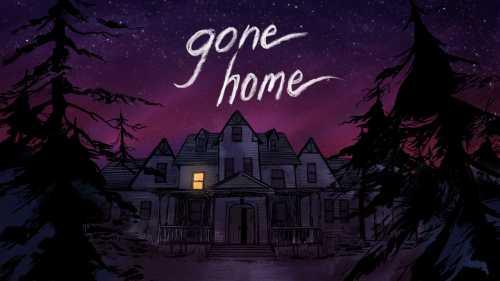 When I joined Steam, the first game she sent me was Gone Home, a game about sisters. You’re Kaitlin “Katie” Greenbriar, the older sister, who arrives back in Oregon after a year abroad in Europe to discover the lights are on but nobody’s home at her parents’ house–and there’s a mysterious note from her younger sister on the door.

END_OF_DOCUMENT_TOKEN_TO_BE_REPLACED

So as I mentioned yesterday, we got an X-Box One. And not just any X-Box One (is there such a thing? They seem to all come with a game…), but the Fallout 4 X-Box One.

Now Fallout 4 was not a game that was really even on our radar. We’d played only a tiny bit of Fallout 3, only a smattering of Skyrim, and as we mentioned, had to eventually give up on Elder Scrolls Online. So we’ve had a rocky recent relationship with Bethesda. But then my news feeds starting filling up with stuff like this… 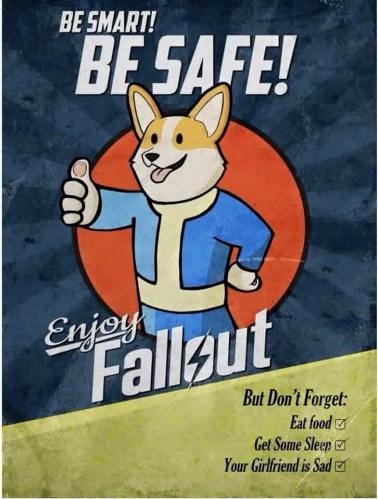 And I began to wonder what we were missing… so when the Fallout 4 X-Box One was $100 cheaper than the Halo 5 X-Box One, it seemed like an easy choice… And once I had it, it was time for a try, right?

END_OF_DOCUMENT_TOKEN_TO_BE_REPLACED 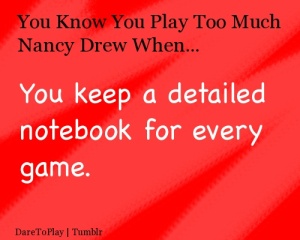 My first part of my journey through playing the Nancy Drew games went very quickly; I actually had the time and I got hooked easily. I couldn’t play the first two because of computer compatibility issues, so I started with the third and played straight through to the twelfth in what felt like a matter of days. Since then, I’ve been busy and life has taken over my gaming time (don’t you just hate that?)

The mysteries are point and click mysteries, which mean that they can be a little cumbersome, especially at the beginning of the series. I had forgotten how tedious movement could be in the older ones because I had played some of the newer ones recently, and so jumping back felt like a time warp. The graphics have certainly improved since the games first started, but they are not as awful as other early 2000’s games that I’ve played before.

The games also include a feature called “Second Chance,” which I almost wish every game would have. I know you can save and load games easily, but the Second Chance feature streamlines the process and makes it easier if you goof (and didn’t know that you were about to make a goof that would end the mystery, and therefore didn’t save before doing it). My favorite use of this feature when replaying is seeing all the silly things you can make Nancy do, like falling over balconies or waking people up in the middle of the night and having them kick you out of the house.

When I first wrote this post, it was way too long. So instead, we’re going to do ND Mysteries summed up by two sentences. Let’s see how this goes.

END_OF_DOCUMENT_TOKEN_TO_BE_REPLACED

David and I have been playing Lego Batman 3 or more accurately it should be called Lego Justice League. I mean all of the Lego games just keep getting better and better and this is no exception. The other thing that they keep doing is getting bigger and bigger in terms of location. This game brings us Brainiac and all of the Lantern Corps, which means that part of the game takes place in outer space and makes for some interesting places that you get to go.

In the game Brainiac is using the power of all the Lanterns to try and shrink the Earth to add it to his collection. At the same time all the various super villains have decided to take over the Watch Tower to try and ransom the earth to make Lex Luthor ruler. They happen to be on the Watch Tower when Brainiac shows up and the villains and heroes have to reluctantly work together or else there will be no Earth to fight over. It makes for a very fun story and you get to go to some new and interesting locations. They also added a few new features to the game, some good and some bad. Overall this is a great addition to the Lego Video Games and continues the DC universe nicely. END_OF_DOCUMENT_TOKEN_TO_BE_REPLACED