Humans as the Latest Addition to a Multi-Species Universe: Defiance

To start my new series about humans as latest addition to a multi species setting, I will focus on the recent TV show Defiance.

While aliens invading Earth is a longtime Science Fiction trope, including on TV, with series such as V, Falling Skies or even The X-Files, Defiance brings an interesting flavor. Defiance is set far enough in time for the change of Earth to have happened, with both pre-existing species and some having emerged prior to the start of the story. Instead of going through a strong invasion setting, the story is more interested in the coexistence of all the species, whether with peaceful times or violently conflicts.

All species still have their biases and issues, regardless of how long they have existed. While the story takes place on Earth, it has been terra-formed so extensively that there isn’t that much left of previous Earth times and cultures, besides a very Western-like feel. Contrary to Firefly, this one has a lot more alien diversity, which is one of the strengths of the shows.

I liked how certain things remained undeniably linked to human history, such as brothels. The NeedWant’s owners were human (including one of my favorite characters in the show, Kenya Rosewater); and a significant part of the sex workers (Night Porters) were human as well, although patrons are from multiple species.

It was also plausible that the screenwriters kept humankind as one of the populations exhibiting racism, notably with some nasty reactions to Irisa, human Nolan’s adopted Irathient daughter. 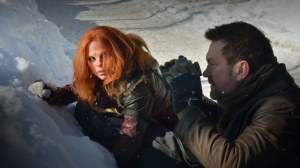 I admit not having watched the third and final season so far, as I am horribly behind on TV catch-up! I have also been more curious about the eponymous MMORPG. I never played it but was surprised that it was still going on even after the end of the show. As I was preparing this blog post, I found out that earlier this year, the game released a significant update they promoted as a season four equivalent to the show.

I wonder how the ratio of humans and aliens is in the game when it comes to character creation, and whether the game will have a sustainable future?

If you watched Defiance, what did you think of humans’ interactions among themselves and with the other species? If you played the game, what was your experience like?