After yesterday’s post, I’m feeling a bit nostalgic – and one of the best things from the site to celebrate has to be the great collection of posts that our contributors put together for when the Geek Baby was born. You can see the original here, at which point I was working on building up towards our current site.  I’ll go ahead and just include the links below!

Hello and Happy Thanksgiving from Comparative Geeks! We’ve had a pretty good year, as far as 2016’s go. I suppose that’s a low bar – 2016 has been pretty crummy all around. I feel like we’ve spent most of the year like this: 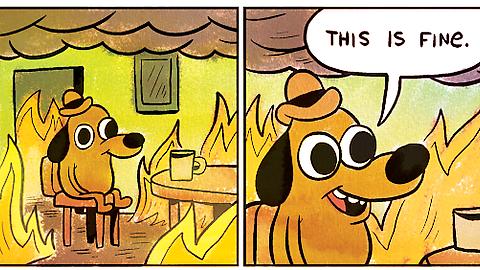 And honestly, we’re thankful for that. The end is in sight, and here’s hoping 2017 is better. Again, it would not take much.

We’re thankful for all our contributors, and all the great articles they’ve written here both before the move to the new site, and after. The most recent series to end was Natacha’s on Humans as the Latest Addition to a Multi-Species Universe. We’re gearing up for some end-of-year posts, and for some new series in the new year.

We’re thankful for our podcast listeners, and want to let you know we’re working on getting some more voices on for more topics. This is definitely going strong, keep listening! If you have any topics you’d like us to discuss, let us know! It’s been a fun addition to the site and our overall discussion of things Geek.

We’re thankful that the result of all the tension and division and partisanship and politics of this year seems to be leading into increased civic engagement. That’s a good, American, non-violent response, and a better result than many that could have happened.

Hope you all have a wonderful day, and a great rest of your 2016!

Posted on September 5, 2016 by compgeekadmin | 4 comments

Hello faithful followers! Two months ago, on another holiday weekend in the U.S., this new Comparative Geeks site got up and running. Its goal is to be a place where geeks can come and geek out, about whatever they want. So far, I think we’ve been living up to that pretty well! Our contributors are going strong, with more on the way.

We’re up to 10 episodes of our podcast, which I guess makes this week 10 of the site. Hopefully you’ve been enjoying that, the comments we’ve gotten so far have been positive. Definitely let us know if there’s anything you want us to address – questions, problems with sound or length or anything like that. We’re hoping to interview and talk to some folks in the future, and we’ll be sure to ask for questions from readers in advance! Make sure to follow us on iTunes or other podcatchers.

What do you think of our other original content so far? We are exploring options to manage the webcomic, so that the archives can easily be accessed from start to finish. What about Wordless Wednesday? And any input on Meme Monday or any of our other series or posts so far? Let us know what you would like to see more of from the site.

If we were going to mention one other aspect of the site, it would be the Forums… they’re off to a pretty slow start. Have you looked at the forums? Start a thread! Check out what’s there! Or tell us in the comments what you’d like to see from the forums moving forward.

Otherwise, just an obligatory sort of reminder to check out our Facebook Page and our Twitter account – follow us wherever you find yourself, so you can keep track of what we have going on as we move forward!

Welcome to the new Comparative Geeks!

Hello and welcome! This is post exists because there was a little feature in WordPress that we did not realize existed: the ability to bring along our existing subscribers from the old site to the new one! We had grown quite the following on comparativegeeks.wordpress.com and many of you had followed us over to the new site, but for some of you (especially with us starting up over a holiday weekend), we may have just disappeared from your Reader feed or email subscription. We’re still here, and we’ve been going strong!

So what have you missed in the last few weeks from Comparative Geeks? Well, let’s see… we’ve had a series by Rose on Voltron: Legendary Defender on NetFlix:

We’ve also joined the world in discussing Pokemon Go, from a variety of perspectives:

Pokemon GO Is The New Devil And Other Thoughts.

We’ve been doing some new stuff too! For instance, we started a podcast called Comparative Opinions, which you can find here on the site, on iTunes, or can subscribe to via this link.

We’ve started some new things as well, such as our Forums and David’s webcomic. A few places to start for those:

The Astral Chronicles – an Introduction

And then there’s the sorts of things you’ve come to expect from Comparative Geeks: reviews, opinion pieces, and general geeking out. We’ve had a number of contributors already, and more in the wings writing and working on posts now. We could link to every post we’ve done this month… or we could let you find the things you like!

So the things to know for keeping up with us. Expect at least one post a day, many days there are two (like today with this post!). The podcast goes up on Sundays, the webcomic on Thursdays. Expect more contributors and more in general going on with the site as time goes on. Because of all of that, we have created a combined Twitter account which will share everyone’s articles: @comparativegeek. Head on over and give us a follow there! And we’re still active on Facebook as well.
If you’re looking for where and how to login to the site as a WordPress user, or how to subscribe in general, look no further than the top sidebar on the homepage! And that handy link to get you to a page where you can sign in with your WordPress credentials (circled in the image to the left). You can also comment on posts via Facebook, Twitter, or WordPress, or by being logged in to the site. Pretty sure the Forums require being logged in, but WordPress should work with that! Let us know if you run into any issues with these features.

In closing, we are so happy to have you with us, faithful followers. Comparative Geeks has been an enterprise years in the making, and it’s reached a next stage now – a stage that we want to bring you along to join us in!

Happy 4th of July for those that celebrate it!!

So this is the 1000th and final post on the comparativegeeks.wordpress.com site; some of you might have noticed some updates made to our social media accounts already. All future content will only be posted to the newly set up and self-hosted http://comparativegeeks.com. This has been such a great place to share some of our thoughts, opinions, views, etc. WordPress.com has such a wonderful community and there is a part of us that hates leaving. Thank you everyone who has joined us here, commenting, reading, and engaging on these topics. Hopefully it will not be too much of a leap to have you join us at the new site.

By doing a self-hosted site there are definitely features that we can add through customizations that would not be available if we kept the site here. We are excited about this new endeavor, but we are sad to leave.

It is not about changing what we are doing, but trying to improve and expand. We will be increasing to posting something at least once a day. Sundays will always be the Comparative Opinions weekly podcast, which we have officially launched so look on the site for that or it should be available on iTunes shortly. The other piece that we are hoping to add is a little bit more community engagement. Forums have been set up to allow for a different type of discussion topics and threads to keep going that can hopefully function a bit better than just a comments section.

This blog started as David and I just wanted to talk about things that we geek out about and we want it to grow beyond just our voice. We have many contributors who have said they would be willing to help write things and we are so grateful to all of them. If you are interested in potentially being a contributor whether it is one post or recurring you can email comparativegeeks@gmail.com. The last three-and-a-half years has definitely been a journey and hopefully they will continue to be so in to the future.