Well, there was a bit of footage recently for Kingdom Hearts III – but now there’s a whole lot more!

At this point, we know the game will have worlds centered around Tangled, Big Hero 6, and now Toy Story. We also know the Olympus Coliseum is coming back (of course), and likely some of the other places like Twilight Town.

I feel like there must be other worlds they’re just sitting on waiting… or that still haven’t been developed. They finally, finally gave a time frame for the game’s release.

Next year? Ugh. Well, at least they’ve actually declared a date – that hasn’t really happened before, and this one’s been years in the making. Still, hopefully they don’t have a whole lot that they haven’t at least started developing – I’d prefer earlier 2018 to later!

The game Lego Dimensions just came out, and they have already listed their first six waves of Lego sets and characters that will be coming out for the next several months. And the list is amazing. Here’s some, between characters and levels:

Some of these we’ve already gotten to play as Lego games – and loved. Some of these, meanwhile, were our favorite guesses for which intellectual property would become a Lego game next. And then there’s Portal, which effectively makes for Portal 3… It’s tempting. Now that it’s out and all announced, we can see the prices, and yeah… it’s a lot of a commitment. 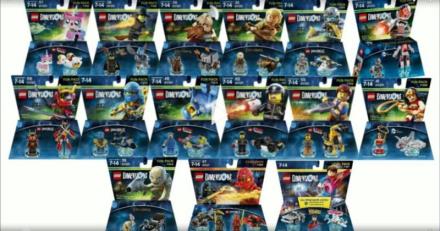 All the things! Actually, probably not even all…
From http://www.us.lego.com/en-us/

There’re other games like this, games where you pay for a toy that unlocks things in the game. One of the others is Disney’s Infinity. It just released wave 3 – this time, Star Wars characters. Wave 2 was Marvel characters. Wave 1 was Pixar characters. So that’s another game that’s a huge crossover of properties and worlds.

And it makes me wonder: is the best way to see something like this to pay a whole bunch for it? To pay for each of the elements, to help pay for the licensing? Or is it that we love and want to see these sorts of crossovers – and they’ve realized it, and are making money off of us for it?

There’s another big crossover coming, without having to pay for it in parts. Kingdom Hearts 3. That’ll be Disney again, but also Square Enix – Final Fantasy characters. And we’ve been playing the previous Kingdom Hearts games – in their great remastered and gathered up Final Mix form, with all the additional games (6 games on 2 discs!). And they’re great, but there’s so much more they could do. More Disney stuff, like new things (Big Hero 6 is confirmed).

But then – there’s so much more Disney owns, as their Infinity games prove. So much more they could shove in – and that we would love to play. And maybe the game we should be playing is just Infinity – or Lego Dimensions. And really, of all these games, Kingdom Hearts 3 would actually be the most expensive – it’ll require that we buy one of the new consoles.

We loved Wreck-It Ralph. We loved Ready Player One (and we’re highly curious about the movie – how many real references will they have?). We loved Kingdom Hearts. We loved The Lego Movie. Clearly, combining pop culture references and intellectual properties is fun and entertaining. What do you think – will there be more of this to come? Is it too expensive? And more importantly – which worlds do you want to see collide? Let us know in the comments below!

We went to go see Big Hero 6, and it was a lot of fun. They definitely did a good job of making it accessible to children, and entertaining still for adults. We enjoyed it, and you probably will too. It’s a superhero origin movie, like they always seem to do with comic adaptations [links].

Having read the comic series, I was trying to think of how to approach it. The comics exist in the Marvel universe, with references to the Avengers, Reed Richards, and the X-Men. And sure, Disney could have gone with that since they now own Marvel, but they didn’t. Nor did they go with our world. Instead, they created a fictional world, and set the events in San Fransokyo – a mix between San Francisco and Tokyo.

This let them keep the Japanese main characters, and then also work in some diversity as well. It’s interesting, though, with a fictional, fantastical world, that they proceeded to ground all of the characters and their power in science. So that’s what I decided to talk about for this movie, the characters. The changed the setting, and the plot, but the characters survived in a fascinating way. So spoilers and explanation ahead for Big Hero 6 by one of my favorites, Chris Claremont!

END_OF_DOCUMENT_TOKEN_TO_BE_REPLACED

After we ended the A to Z Challenge in early May I did a post about how we had so many things to talk about, so many games to play, so many movies to see and shows to watch.

Now we’re in summer, and while the blockbusters have hit (especially a lot of the LitFlix), the shows have ended (even Game of Thrones!), and we have time to breathe. We also have some of the time-sinks in our personal lives past us. So where are we at? What are we up to?

I thought I would highlight some of our thoughts on topics moving forward, and some of the things we’ve crossed off that ambitious list of topics. Onward!

END_OF_DOCUMENT_TOKEN_TO_BE_REPLACED

In 2013 we had fun doing LitFlix, reading the books or comics that had to go with the movies. I’m going to continue that on into this year, with whole new offerings to go from!

Marvel has 4 movies alone; another way to look at it is there are two from Frank Miller, and two from Chris Claremont. They’re dipping back to the classic writers.

The ones that are part of a larger comic universe are harder to plan for: they have to work off of the content from the movies, as well as any comic inspiration. So, I’ll be putting together what I can for those, reading inspirations, and seeing what I can do!

I’ve got trailers to follow for the ones that have trailers, and, like last year, I’m listing what I have found for reading these materials – so you can read along too for the movies!