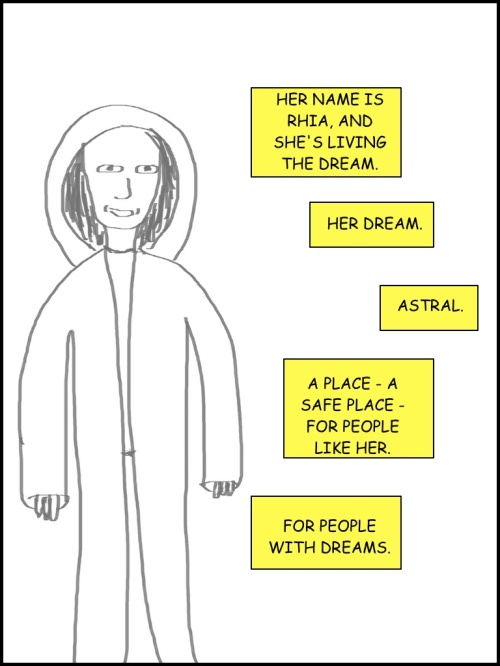 Posted on January 11, 2017 by CompGeeksDavid in Web Comic

Posted on December 22, 2016 by CompGeeksDavid in Web Comic

The Astral Chronicles – an Introduction

Hello and welcome to the Astral Chronicles! Before diving into the story, I thought I would give a bit of a history and an introduction.

What has become the Astral Chronicles began as a successful NaNoWriMo (National Novel Writing Month) story, as in, I made it to 50,000 words. Immediately afterwards, as I imagine a lot of NaNoWriMo authors do, I reflected back on my large body of work and realized, though I had met my storytelling goal, I had done so with a minimum of characters and without fleshing out the world much. I proceeded to start to do so…

Since then, I have been world-building. Brainstorming. The story became the setting for a D&D campaign I ran. It grew and blossomed and changed some. I have an outline. The characters I had originally written about became secondary characters – very early on I thought up a new main character.

Somewhere in there, I started blogging, too. And got back into reading comics. Met a bunch of writers and great people online. Looked at what they were doing, what I was doing, wondering about writing. Because writing is why I got into blogging, it’s what I’ve always wanted to do… but I’ve realized, even more than that, I think maybe writing comics is what I want to do.

Unfortunately, that also includes drawing comics, or at least it means so for me right now without an artist to back this project up. I had not drawn for a long time when I picked it back up to explore doing this story as a comic. I’ve explored working with technology a bit. I’ve sketched and doodled. Is it perfect? No. Great? I dunno. Mine? Yes. And having my own style for it is at least something I can bring to the table.

Now that we have a full website where housing a webcomic makes sense, it seemed like the time to finally get this started. I’m aiming for one a week, and looking at Thursdays for that. If there’s enough support and call for it, I could work on expanding that over time.

So that’s where I’m at now – a decent story, a number of characters and settings, and for now you’re stuck with my drawing (which should improve with time!). Which means now, let me tell you a bit about that setting and story!

The Astral Chronicles began its life with me wondering what it could be like to explore the whole history of a world, from a fantasy beginning and towards a more modern and even science fiction later period. To tease a bit about how I was accomplishing this, the working title originally was Immortal Coil…

The story opens in a modern-day sort of setting, but it is not our world. There are similarities – and there are differences. There’s a whole group of characters to meet, then, centered around a place – Astral. That word, astral, has a lot to do with the psychic and the thought of another plane of reality, and that is no mistake! The thing that’s maybe hardest to say in the work itself, so I guess I’ll say it here: this is a society with a mild level of psychic ability, that people are born with, and that as a thing is taken for granted in the same way we might take something like an opposable thumb for granted. So especially for technology, we have interfaces and such that interact in a certain way, and they would have a different way of interacting.

I also think there are things I want the audience to know that society in general does not know, because the audience is going to be getting to see the whole history – while in the modern day, much of that history has been lost. As such, you have both science and religion trying to find and present their view on what that history is and was. I wanted that tension as well, the thought that science and religion might both have some good points – and that they both might have some things wrong and some prejudices that are going to cause trouble.

I hope you enjoy! I’ll be happy to join in conversation and to take critiques. I’m sure I will improve with time, but the time to get started is now – so check back next week for the beginning of the Astral Chronicles.

Posted on July 7, 2016 by CompGeeksDavid in Web Comic