END_OF_DOCUMENT_TOKEN_TO_BE_REPLACED

The Legend of Zelda: The Wind Waker

Disclaimer: GuestGeekBrian is an employee of Nintendo of America. His opinions are his own and in no way reflect those of his employer.

“It was the spark that started the fire– A legend that grew in the telling”
– Jonathan Hickman, Avengers (2012) #1

There once was a boy in a green cap with pointy ears and blond hair. Okay, maybe it was strawberry blond? Anyway, this boy set out to rescue a girl with hair and ears like his. He left home with nothing but the green tunic on his back, but a kindly older man gave him a sword. He delved into the deep places of this world to search for the power to save the girl. Some say he even ventured into worlds beyond this one. The girl was held captive by an evil wizard who had embraced the bestial power in his heart, but the boy’s courage and the girl’s wisdom proved too much for the wizard. He was defeated — for a time.

That should sound familiar. But which game in the Legend of Zelda series is it? It could be (nearly) all of them. While Nintendo has an official three-timelines explanation of how all of the Zelda games fit together, I like to take the title literally and think of them as retellings of the same legend. END_OF_DOCUMENT_TOKEN_TO_BE_REPLACED

There are HOW MANY Red Rangers? Comparing US and Japanese TV Continuity 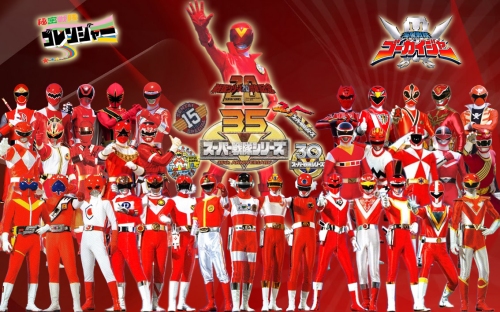 35 Years of the Red Ranger

Living in Japan for the past two years, I’ve been struck by a curious difference in the way this country and my native United States approach ongoing continuity in televised speculative fiction. Shows here are constantly refreshed with new storylines and new characters that (we’re led to believe) US audiences would never stand for. Why? I have no idea, but bear with my while I lay out the basic differences and offer a few theories as to the forces at work. END_OF_DOCUMENT_TOKEN_TO_BE_REPLACED