Broken Bells – After the Disco Concert Review for Throwback Thursday

We’ve come to the end of the Listening to Music Without Understanding It series, I hope you’ve enjoyed the throwback!

Last week I tried to talk through some of why I like the Broken Bells. They’re my favorite band; I hope some enthusiasm showed through! But I wanted to give a further look, to give a review of the concert I went to, to let you know where you can find the Broken Bells.

This is me finishing up my first series of music posts, which have been vaguely connecting through veins of me sharing some of my favorite bands, and talking about how I interact with and find music. Two sides of the same coin, since one of the best ways to find music is through recommendations, and, once recommended, through sampling the music yourself. Hopefully you’ve found someone new or something you like through my writing, because I know your comments and recommendations have helped me find some new music.

So let me know in the comments below what you think of my music series, or the Broken Bells, or who your favorite band is, or really, whatever you like! But for now: Broken Bells!

As the band came out, it was the vocals that play at the beginning of their recent music video, for Holding on for Life. And on the screen at the back of the stage, projected from a circular mirror array in the middle of the stage, was a reflection of the audience. Spotlights flowed around the audience, which started to bounce and beat and get excited and flow with the start of the music.

The show opened with the first song from their new album, the album they’re touring for, After the Disco. The song is called Perfect World, and it set a stage. The song opens with about a minute of just instrumental, of just them playing. It was a great warm up, a great way to get us in and excited and get things started.

On the screen, they panned away from the audience. Up, into the sky. To the Earth – with a great night sky shot, with all the cities lit up, their own little stars. It pans out further – off and away. Planets. Pulling away further. And then, suddenly, warping away, all with the music.

For their second song, they played my favorite: The Ghost Inside. I’ve referenced before the power and influence this song holds over me. It was pretty powerful still, it hit me pretty hard. I don’t think I was the only one – there were people dancing in the aisles ahead of us. But honestly? The best part was the end. James Mercer got us all clapping, got us in time. And they flowed, through this time, seamlessly from The Ghost Inside to After the Disco.

After your Faith has let you down,

I know you’ll want to run around,

But after the Disco…

All of the shine

-Broken Bells, After the Disco

It was magical. It was really the beginning of me rethinking their music, of me seeing it in this new light – of them blending and merging their two albums. They did this also on the screens with highlighting a character, mostly a silhouette, of the girl from the Holding on for Life video. I’m not sure if she’s meant to be the same character as Christina Hendricks was in The Ghost Inside – I would understand, I imagine she’s harder to get in a music video these days. Nonetheless, she became this recurring character throughout our journey for the evening.

Their first pause was after After the Disco. Not much, but enough to name the song before they played it: Mongrel Heart. A song I was pleased to see made the cut to the concert: it’s part of the strong finish to their first album, but not necessarily a song that stands entirely on its own. I mean, part of what’s great is how it fades into The Mall and the Misery…

So, they transitioned it into The Mall and the Misery.

They did a lot with light during the show. Projections like stars on the theater ceiling, projected rays of light while we were warping away into space. Darkness between songs. It was after The Mall and the Misery that they first did one of their big shifts during the silence: suddenly, they were in a new position. 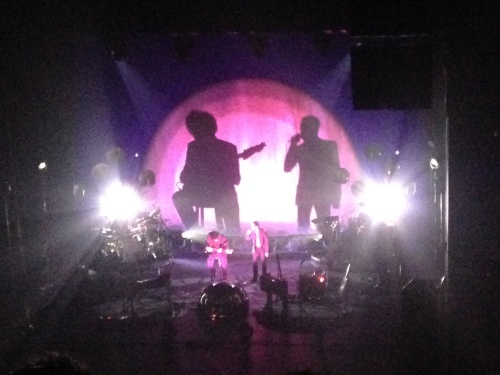 With Danger Mouse in a seat, playing the guitar, and Mercer next to him singing (and later, whistling), they played The Angel and the Fool. A beautiful song, and fun in the presentation as well. I saw it, and felt I just had to get out my phone (limping along on its last few percent of power) and snap a photo. I love how it turned out.

I won’t drag on and talk about every song they played – they eventually got in 18 (I think) of their 25 songs from their albums. Pretty good representation! END_OF_DOCUMENT_TOKEN_TO_BE_REPLACED