How Are They Going to Pull Off… The Dark Tower

As I said recently, it’s getting to be time to start really thinking about and talking about The Dark Tower. Honestly, the trailers started hitting for this one very close to its release date, which is refreshing, after so many films with trailers 6 months to a year or more out from the movie’s release.

The movie has renewed interest in the series, not only in myself, but in a number of fellow Comparative Geeks. Hannah has just gotten to reading the books for the first time, after asking what she should read by Stephen King. I know I suggested the Dark Tower series, because I had asked the same question of myself a few years back: having never read any King, where do you start? The Dark Tower is so large and meta that it is representative of the rest of King’s work in many ways, making it a great starting place.

Meanwhile, Rose is re-reading the series, and on Wizard and Glass last I saw.

It’s with Rose I’ve been talking about the series the most, and it’s been interesting talking with a fellow reader and trying to recall these books. We’ve talked especially about the first book and how it functioned to introduce readers to the world, which seems particularly relevant in terms of the film.

There may be more about the books to come from Hannah, Rose, or others (Holly hasn’t read them… yet), but for now, I want to consider what we’re seeing here about the film, and how it relates to the books, and the general question of… how are they going to pull off this series?

But the first book is The Gunslinger, say please, say thankya

The thing first and foremost that I’m sure a great many fans latched onto when they were first seeing anything about this movie is that it’s called The Dark Tower. This is the name of the series, sure, which also how franchises like this seem to sell themselves lately (Hunger Games, Twilight, Maze Runner, etc.).

We can perhaps blame Harry Potter (which may also come up in the books…) for this phenomenon, but his name was indeed in each book title at least. Unlike Fantastic Beasts, which seems is going to share that title with each film…

The thing is, by not calling the movie The Gunslinger – the name of the first book – they have clearly freed themselves from a slavish connection to the books. And we’ve heard rumors about a TV series, about the films being less than 7 (there’s 7 books… well, 8 now with an additional story-within-a-story book…), about them just generally trying to bring the story to the screen, rather than do a full adaptation.

Which, approaching this series from a non-traditional standpoint makes some sense to me. As it is, the series did not follow a traditional approach. For one thing, it was written across Stephen King’s career, ranging from one of his very first books to ones he rushed finished after a near-death experience, and even the more recent The Wind Through the Keyhole I was referencing above. Over this time, King’s storytelling changed tremendously.

The story also follows a main character who is not the most reliable for us to follow, and who also has a more local sense of the world he is in – a world that I think we will see visually has far more similarities to our own than Roland realizes. But for example, the middle book, Wizard and Glass, is almost exclusively Roland’s backstory as told to us by Roland.

When they started making a graphic novel series (written by one of my favorites, Peter David), they decided to approach the story chronologically, rather than as King wrote them. Therefore, it started with the events of Wizard and Glass, and then worked its way towards The Gunslinger and on from there.

It doesn’t look like the films will be following either the books or the graphic novels very closely, instead blazing its own new trail. Hopefully, they can keep it going now that it’s nearly upon us, since this film has been stuck in production hell. For more on that and some words on the potential of a TV show (and spoilers), I recommend the Wikipedia page.

So one of the things Rose and I really got to talking about was the characters. I feel like I completely understand what happened here, as I experienced the same thing with my NaNoWriMo story that has become The Astral Chronicles (which I’ll get back to, I swear). The Gunslinger is a book with very few characters in it, basically focused entirely on our protagonist and the man he’s pursuing. There’s also young Jake, both a companion and a pawn.

Before I get back to Jake, it’s worth noting that the second book, The Drawing of the Three, addresses this problem: the three that are drawn are three main characters to join in the journey with Roland. This was a feeling I experienced after finishing my NaNoWriMo: the need to infuse the story with more main characters.

Anyway, as I mentioned above, I find Roland to be an unreliable narrator/protagonist. There’s far, far more about this world that he knows that is not revealed to the audience, or is revealed slowly over the entire series. He lives there, he’s the last of his order, he’s alone in the world. Plenty of reasons for him to be keeping things to himself, often without fully realizing he is – and often times with reason.

Still, as with most stories, a character that can function for the audience, who can pull out some information about the world the author is telling us about, who can be an excuse for exposition – that’s what we get in Jake.

It’s interesting, therefore, that the promotional things I have seen so far have focused on three characters: Idris Elba’s Roland the Gunslinger, Matthew McConaughey’s Man in Black, and young Jake. So while I’ve said that they can step far afield of the books, they may not have. The additional characters from The Drawing of the Three have not appeared and may not in the film, coming in later instead (though not in the TV show, potentially, if that’s set in the past). So that basically leaves this as The Gunslinger by another name.

Introducing more main characters later to this extent could be very interesting. Not sure how it’ll work out for this series – I guess wait and see! There’s plenty about these characters that is rooted in the time they were written, as well, but there’s plenty of room for this to be a story set not in our present day. So will the characters vary widely from the book, or not?

I want to talk a final spoiler-heavy area, but I’ll do so after this image! 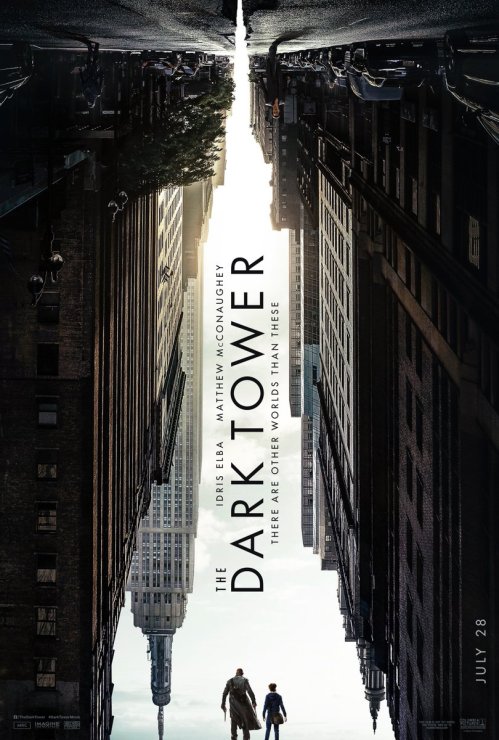 The End is the Beginning is the End

I’d heard this rumor, and I saw it stated again on the Wikipedia page… with a source.

The Dark Tower is close, now. The Crimson King awaits. Soon Roland will raise the Horn of Eld. And blow. pic.twitter.com/rqGSKM3dWL

Oh. So Stephen King is letting us know. This is a sequel. This is set after the end of The Dark Tower the book. Possibly even after the graphic novels (since in those Roland also has the Horn of Eld). Is it really the last time around? Is this King’s attempt to close the loop, to end this series once and for all?

And with it being a new loop, will there be different major life/world events that play into it? For instance, in the books there’s a focus on the World Trade Center (and Black Thirteen), and on Stephen King’s own near-death experience. Will these things be replaced by something new? Cut entirely? That’s a few years on, at this point, but it’ll be interesting to see what they do!