So this was something of a conclusion to my posts on the definition of Science Fiction and of Fantasy, by diving into a personal and specific example of why the whole discussion mattered to me in the first place. I hesitate to share it again for two reasons: one, for the personal aspects, and two, because the original post generated a whole bunch of discussion. As such, going back to the original to see others’ opinions is a good way to get more than my single story here. Also, the personal aspects are no longer accurate.

One of my favorite things I’ve written on the blog is my series on the definition and importance of Science Fiction and Fantasy – of fictions that might be called Speculative, or Romantic. And when asked, I said that one of the things that I would most like to change in the world is people’s opinions about these genres, or maybe about genre fiction in general. However, through all of this, I lacked a solid, concrete example. An example of prejudice against Science Fiction or Fantasy.

There are a lot of things in this world that we shouldn’t discriminate against. Things you can’t control, things that aren’t a choice, things that should have no bearing on life. But then, there are things that are opinions, that are a choice, that I can go right ahead and be upset about. And for me, the one that takes the cake is being against Science Fiction and Fantasy.

So, I had said I was going to do a post about movies this week. That’ll have to wait. Because last night I got a great example of anti-Sci-Fi discrimination. And I feel the need to share, and to vent. So let me set the scene, let me rant a bit, and then hopefully I’ll have it out of my system! 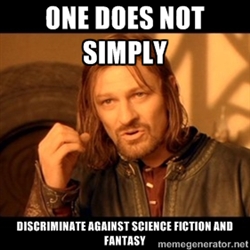 So first, I feel the need to get a little personal, to set the scene and say where I was and what I was doing at the time. This is not to set up a moral high ground, necessarily, so much as to show some of my confusion at how out of place the whole conversation was.

I am the president of the board of directors for a Clubhouse International clubhouse. Clubhouse International is a model and an accreditation and training body for mental health recovery – a model based on helping people with mental illness live a normal life. So, help with housing, work, shopping, education, access to services, you name it. I’m trying to explain it in one paragraph… click the link for more!

Anyway, I had a board meeting last night. And afterwards, a few of us were sitting around talking for a minute. Our executive director, who is a remarkably effective director and who we hired last year, was talking about what he’d been reading lately.

He had discovered that, beyond the films, there was a whole slew of fiction centered around the Star Wars universe. He had started reading through it, and found it fascinating – whole words invented, with their own philosophies, culture and history… he seemed to be loving it. So first let me say, no, this was not what I had a problem with! Not knowing something exists, and then finding out about it and getting involved with it? That’s the sort of thing I’m all about! No, it was the conversation that this sparked.

Everything started from a place of wonder. Our director had found something new, something interesting and he is enjoying it. It’s Science Fiction, as well, so it made me happy. (Well, I’ve argued before that Star Wars is Fantasy, but anyway…) And I was a little amused, since I had known about these books for years – I remember my parents reading Star Wars books when I was growing up.

But then, one of the board members said he had never seen any of the Star Wars films, and he considered it something of an accomplishment. He went on to say that some people just seemed to have too much time on their hands, and that he effectively had no place in his life for Science Fiction. Another board member said that she didn’t like Science Fiction at all either, and just fed into everything he was saying.

Shortly thereafter, the director just got up and walked out of the room. I don’t blame him – I wish I could have too.

So you know, okay, there’s not getting Science Fiction or Fantasy. There’s not having experienced it, or any you like. There’s just never getting around to it. Those are all okay in my eyes, and with an open mind, I bet I could lead many of those folks to Science Fiction…

But then there is blatantly not even giving it a chance, saying it’s trash without trying it, and then mocking the people who are fans. And this, this I can discriminate against. This I can call out and say that it’s not okay.

As to why I wanted to provide the context of it being a board meeting, and the board being what it is – for an organization based around helping people lead a more dignified life, about being able to have choices, to be respected, to have support and peers. Apparently, we’re cool with that for people with mental illness, but not for Science Fiction fans???

The two concepts really just don’t mesh for me. Do you agree? Am I overreacting? Let me know in the comments below!

So, on different notes, mental illness. Not necessarily something personal or close to my heart, but an important issue, I think. Being on the board has given me a lot of time to think about it, so that you got things like, for instance, my rant about Amazing Spider-Man 2. It’s a massive post, so buried in there: my biggest problem with the film was that Electro is basically the villain because he has a mental illness. Because he’s been marginalized, ignored, cast aside, ridiculed, and then gets power and snaps with it. But he’s the victim, so it’s really hard to vilify him.

For much better writing about mental illness, check out Rose B. Fischer’s Redefining Disability series. I’ll be honest, I need to read all of it too. But what I have read is good stuff.

If you want to know more about Clubhouse International, really do check out their site. There’s a directory of their locations – there’s likely one near you. You can help out, or donate, or even just be aware. They’re a great resource and program, and work in a fundamentally different way than the rest of the treatment and assessment behavioral health world.

And if you want to know more about my thoughts on Science Fiction and Fantasy, the odyssey started with this post, about the definition of Science Fiction, moved through the definition of Fantasy, and then a comparison post… I revisited the genre terms, and came to a natural sort of conclusion in this post, about Realistic versus Romantic literature. I’ll bet my fellow board members only read realistic fiction… if they read fiction at all. If they read at all! Grrr. Rant over. I’m out!