And then there was Cherry City

About a month after my visit to Wizard World I had the opportunity to go to another Comic Con – Cherry City Comic Con, in Salem Oregon.

This was a smaller event, and I find it interesting to compare the two – particularly if I just look at the Sundays I worked.

There were less people at Cherry City, to be sure, and the celebrity guests were lower profile. I saw less cosplay or costuming (though what I did see was impressive), and it seemed like there were more people who had a lower-level of Geekery. Less hardcore, or maybe just less overt about it. Honestly, it made it seemed like it would be a good place for a baby-geek, or when Introducing someone to the awesomeness (and diversity) of the geek and nerd world.

Something that stood out to me was how very many kids there were! So many Elsas, Annas, and other princesses! There was one little girl who was dressed PERFECTLY as Rey (and happy to tell you exactly who she was).

This guy had a great, crocheted, Cthulu mask/hat!

It was a lot of fun to see these little ones running about, happily posing for pictures and sharing about their costumes.

One of the highlights of the displaying were the two dinosaurs – costumed as Freddy and Jason – running around and getting into the occasional fight.

They fight one another!

And they’d fight others!

The pace of Cherry City was slower, which meant less contacts for me (sad on the business end of things), but it was better for actually connecting with people. And it didn’t completely exhaust me by the end of the day!

I’m curious to hear what other people’s experiences at Comic Con’s have been. What kind do you prefer? What is the thing you always want to make sure to do at a Comic Con? 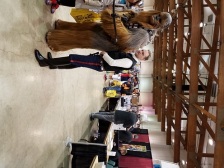 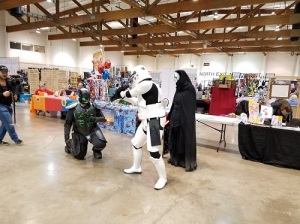