Alright, after a couple of rough days, I’m getting things back together. In the mean time, there was something I was working on… 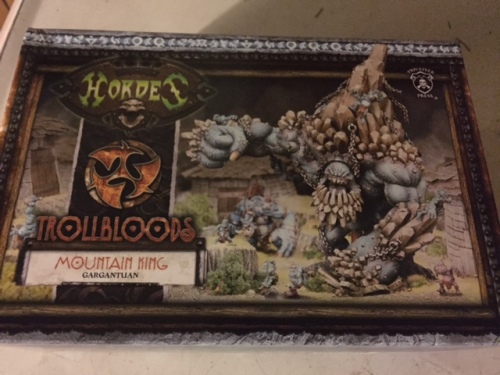 I got a Mountain King! I spent months agonizing about which of the now three Trollbloods Gargantuans to buy. They are really good rules-wise in the current edition, and are a solid anchor to an army (they come in at about a third or more of an army’s cost, so they better be!). Beyond that, they are aesthetically cool – there’s the Mountain King, with the little Troll Whelps hanging off and the dangingling chains; the Glacier King with all his icicles; and the new Sea King:

From a painting and gameplay standpoint, any of them would be cool, and more than one is a whole lot of money, building, and painting! So I wanted to pick one. In the end, it was rules and army value that had me go with the Mountain King.

I was pleasantly surprised to find, when I opened it up, that it had a whole lot of large pieces:

They weren’t all a perfect fit (the mountainous back, in particular), and there was quite a bit of mold flash to cut off, but those were big pieces easy to deal with for the most part. With these few pieces, the vast majority of the model is done, and looks ready to be on the table kicking butt!

Fortunately, my skills with green stuff – the affectionate name for epoxy putty – have greatly increased, and the model should hold together really well. Unfortunately, that’s not the whole model.

What I have left is a TON of chains that will dangle off all over the body. Even with epoxy, I imagine many of these will be fragile contact points and will break off over time from use or bumping. I am not sure what I want to do about that – for instance, only adding some of the chains, or having a much larger portion in contact with the Mountain King. But for now, I’m ready to get him on the table and play some games!