Agents of SHIELD is back and finishing off their season with a bang! The more that the plot has developed this season, the more that we are loving it. This is probably the best overall season they’ve done of this show – but it’s also dependent on the weight of what has come before.

Especially now, as they’ve entered an alternate reality, where Hydra won and is public and the “good guys” – and where the Inhumans are the enemy, which seems like a good lead-in for the Inhumans show this fall. Agents of Hydra. They’ve had fun with both re-doing their season promo posters as “Agents of HYDRA,” and with in-world propaganda posters against the Inhumans.

However, the images that I saw them posting on their Facebook page that got me most excited were concept art of the characters, trapped in their alternate lives. For more of the first two sets of images, check out their Facebook. But here are those characters art pictures! 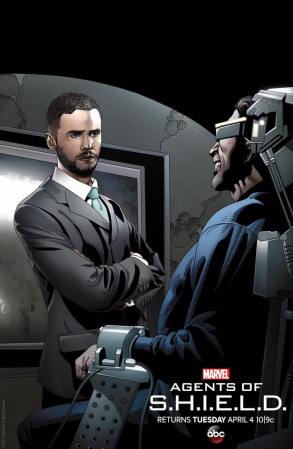 This entry was posted in TV and tagged Agents of SHIELD, Alternate Realities, Characters, Inhumans, Marvel. Bookmark the permalink.