How Are They Going to Pull Off… Logan

Another in my ongoing series wondering on the question… how are they going to pull off this movie? This time it’s Logan, entering in as the 10th X-Men franchise movie, the third solo Wolverine movie, and as a theoretical adaptation from the comics – especially of the Old Man Logan story. That’s a lot of baggage to carry into a movie.

Meanwhile, the trailers have shown us a movie stripped down to simplicity, to emotions. And violence, something that follows Wolverine wherever he goes. It’s worth noting this is also going to be rated R so they’re doing a bit there which they haven’t before with him, but this definitely looks like a movie that serves more purpose than just an excuse to make an R-rated Wolverine movie.

To be honest, the movie just looks good and is also getting great feedback from folks who have seen it, from the people involved, or even just people seeing the trailers. This may be a movie that transcends its superhero-movie subgenre and becomes just a standalone classic. Unfortunately, that’s the hype and expectation level they’ve gotten me to, so it has a lot to live up to!

But to get to that point, well, how are they going to pull that off?

Based on the Comics? 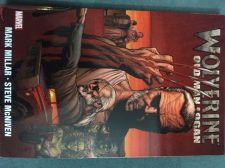 Old Man Logan is a series by Mark Millar, who also wrote series like Civil War and Kick-Ass and Kingsman which have been well-adapted to the screen. They’re also a whole lot harder to read, with Millar being much more harsh to his readers and the genre. You can read more of my thoughts on that here.

In a lot of comics that we ended up with for free, we got a copy of Old Man Logan. So while I can’t bring myself to fully read it… I have flipped through it. It’s definitely an R-rated story, lots of violence, lots of killing.

It’s a dystopia, years in the future. The super villains all teamed up, killed all the heroes, and divided up the world. I think there was an atomic bomb or two as well? And the Hulk ends up on the bad side. And there’s lots of Hulks. But we’re also decades after this has all happened (thus the old man-ness).

There’s references to the whole Marvel universe in this, villains and heroes alike. Most especially, it’s Old Man Hawkeye who comes to pick up Logan and drive around with him. 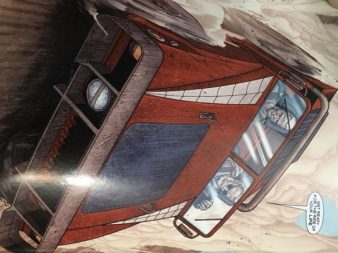 In the movie, there’s no way that they can make all these references. The movie rights aren’t there. The part of Old Man Hawkeye is going to be played by Old Man Xavier, but to be fair, that looks absolutely amazing. Patrick Stewart is going to add a lot to this movie, I think.

Meanwhile, not having all those references to add to the movie means it can be far more focused. Some elements of “the heroes are gone” might still be there – only it’s “the mutants are gone.” And there seems to be a bit about family in the comic, and there’s a focus on family in the movie it looks like.

But… it’s all definitely looking like tenuous connections to the comic. However, I take that as a good thing.

Set in the Movie Universe?

Here’s the other hard part for this movie. Sure, a near-parody 4th-wall-breaking movie like Deadpool can get away with not fitting into the overall timeline or story-arcs of the existing X-Men movie franchise. However, the other movies have taken great pains to connect the timeline between the original films and the later prequel series.

However, they also changed the timeline with some time travel, so that the third movie (X-Men: The Last Stand) didn’t happen… which also means that its sequel, The Wolverine, didn’t happen. Oh, and X-Men Origins: Wolverine didn’t really happen the same anymore either. So this is the third “solo” Wolverine film, but in a franchise where the last two aren’t part of the original timeline anymore.

All of which is, as Deadpool points out, so confusing.

Which means that it’s likely that this movie is happening “in the future” without so much reference for what came before. Mention of having lost the X-Men, the mutants. A world changed. A future that is unfortunate.

By having known characters but not having it rely heavily on the other movies, this one can appeal to people who haven’t seen all or many of those films. I feel like that response has already been happening. We could be wrong about that – but there’s a good chance of it. Which means, maybe it doesn’t matter where this fits in the overall franchise. It didn’t matter for Deadpool.

Thinking that they will make this movie more like Deadpool than any of the others makes sense, as Deadpool‘s success seems to be what they are especially hoping to tap into with this movie. The more stand-alone nature (something that was also a success for Rogue One). The R rating.

That’s all my thoughts, anyway. What do you think? Let me know in the comments below!