Note: This post contains spoilers from Episode 7 of Westworld, which I will recap this weekend. Stop reading now if you don’t want major plot points ruined for you.

Good day, everyone! Given the mysterious nature of much of Westworld’s plot and setting, there are already a great deal of fan theories grappling to explain aspects of the story that don’t entirely make sense, or to seek out connecting threads among apparently disparate facets. Let’s begin with two of them, with more posts like this one to follow.

William is Actually the Man in Black

William and the Man in Black. Image taken from Thrill List.

This theory assumes that the show is following more than one timeline—that is, that the stories we are being shown don’t necessarily occur at the same time and may in fact be decades apart.

In this theory, William and Logan are visiting the park around 30 years previously, just after the troubles we keep hearing about that resulted in Arnold’s disappearance or death. (Note here that you never see William interacting with an elderly Dr. Ford to help cement this plotline in the narrative present). We can assume, then, that Logan’s family business is Delos, and that this is the story of how they planned on acquiring Westworld.

Further, the establishment of a deep relationship between William and Dolores—one that can be erased from Dolores’s mind with a simple reboot—can be seen as a future breaking point for William—his turn from white to black hat, if you will. During his time with Dolores, William also makes a similar pronouncement about the park as the Man in Black, and sees it as a place that reveals a person’s true nature, and that he wants to spend his life trying to understand the grand game.

With those points in mind, it becomes somewhat believable (as fan theories go) that William becomes hardened from his experiences in the park and eventual loss of Dolores, returns home to marry Logan’s sister, Juliet, and eventually takes over Delos himself. Following the unmistakable spark of goodness within him, he uses the company to establish whatever life-saving foundation the Man in Black in credited with, and he then uses the company’s revenue to keep the park open no matter what. All of this to understand himself, to reach the end of the story, and perhaps to hurt those who hurt him along the way.

Bernard is a Host Version of Arnold

Per the events of the last episode, we know that Bernard is a host, so the core assumption of this theory holds up.

The most convincing piece of evidence for this is the photograph that is supposedly of Ford and Arnold (something that’s curious in and of itself, since it is said at some point that no photographs of Arnold exist). Some say that the photograph shows Ford, Ford’s father, and a blank spot where Arnold would be—a spot that appears blank to Bernard (the only viewer of the photograph besides Ford himself) to hide the truth from him. It could be argued that Ford built Bernard to fill the place of his missing friend, just as he still interacts with the host family that Arnold built for him. It would seem that Ford has difficulty letting go, and perhaps spends years after the fact attempting to analyze other people and his relationships with them. 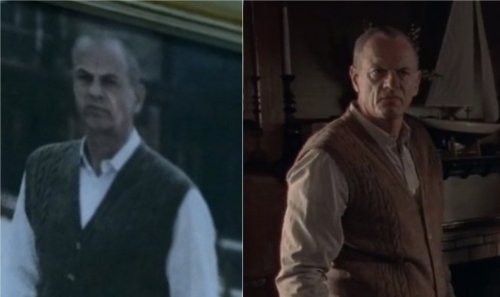 Photograph of “Arnold” versus the host copy of Ford’s father. Image taken from Slash Film.

If all of this is the case, it stands to reason that the interactions we witness between Dolores and Bernard do not actually include the Bernard we are familiar with. This is Arnold himself setting in motion the events that will shape Westworld and the evolution of its hosts for decades to come.

What are your thoughts on these theories? Let me know in the comments below, and be sure to keep coming back for my other Westworld posts.

Bonus Question: Do you think that the events of the original Westworld movie (or some re-imagining of them) may be the “event” from 30 years previously that everyone keeps talking about?

Yul Brynner’s Gunslinger from Westworld (1973). The Original Terminator. Image taken from The Verge.