Do Favorite Movies Come In Waves?

I read a review today on Facebook of someone who has only just seen Captain America: The Winter Soldier. And their response… it was okay. I looked to the comments to see, indeed, others had hopped in to say what they had liked and enjoyed about the movie. I hopped in too, but that’s overall not the point of this post. I had written one before, with a poll, about the various opinions on the film – you can check that out here.

However, the act of jumping in to defend the movie got me thinking about the Marvel movies as a whole, above movies lately in general, about what I was defending. Are these my favorite movies ever? I think the answer there is no. Worth defending? Well, honestly, we spend a lot of time on Comparative Geeks talking about these films, so I suppose so!

However, if these films we’ve invested in so much aren’t my favorites, what movie or movies are? And that sent me down a nostalgia-filled rabbit hole, but I started noticing patterns. Okay, so let’s think of this. There are eras of movies in my life – in yours too, I assume. Great movies that take me back to when I first saw them, whether they came out then or not. The current era are all these superhero movies (with the occasional great science fiction movies) and it’s pretty great, but they’re especially great in combination, in continuity. Maybe that’s why we jumped in to defend Winter Soldier – it’s pretty great all on its own, and that’s special!

I was born in the 80’s, so there was a whole bunch of good movies for me to watch, movies that my parents made sure to show me. Some of these were ones coming out at the time, that really struck me – Ghostbusters, Back to the Future, series like that. I grew up with these, and they were bigger for me than animated films of the time, though I liked those too.

But there were other movies, ones that my parents had to share with me, older ones. Amazing ones. Star Wars, Indiana Jones (especially Last Crusade), Mel Brooks, Monty Python and the Holy Grail, The Princess Bride (more on that one soon!). The sorts of movies that became the quotes and references in my house growing up. I imagine you had some similar films or shows, things that united you and your friends and family.

Growing up in the 90’s, I was starting to think back about movies. I was like, eh, there wasn’t a lot… and then they started coming to mind. And there were movies that were foundational for me, movies that I obsessed over in various ways. Ones that came to mind in particular include Star Trek: First Contact, Goldeneye and Tomorrow Never Dies, Independence Day, and The Fifth Element.

I can tell you things about these movies – like how I was so hyped up and looking forward to Independence Day, or how the book I’ve potentially read most in my life is the novelization of First Contact. And I still think that the villain in Tomorrow Never Dies is frighteningly realistic, that we could have someone like that in real life…

But there’s this era of movies that influenced me, that I dived into head-first and grew up with and that had an impact on my identity. Stories that mattered to me. And obviously, still watching and rewatching those earlier films…

Circa Nineteen – Movies I Call Favorites

If you recall (or want to read it now) – or have read it from the source – Steven King has a theory that I like, about us getting caught up in being our nineteen-year-old selves. In our modern language, it’s like we start adulting and kind of keep adulting like that… But there’s a lot about my nineteen-year-old self that does still feel valid. I will point out that the story that has become my webcomic here on the site is one I started at nineteen… but also, several movies that I consider to be my favorites come from watching them when I was nineteen.

I think an element of that is when pressed (icebreakers and such) I had to come up with an answer about favorite movie. And at the same time, meeting people with other movie backgrounds or who had seen other things, and watching the things they recommended. A culture shift.

So there’s a few that I can identify from around the age 19: Donnie Darko, which I still hold to be my favorite movie but I don’t necessarily question that; Eternal Sunshine of the Spotless Mind, which is still amazing so that’s fine; and the Matrix trilogy, which I got to late and fell in love with, to the point of being a big fan of all three. I was listening to the Reloaded soundtrack earlier, and yeah, I’m probably going to need to watch those again soon… Oh, and a couple of other series were big around the time that got me going to see them multiple times, including Lord of the Rings and Pirates of the Caribbean.

I think my main point here, though, is that I reached a point when I identified favorite movies, designated them as such, and I’ve moved on from there. But are they my favorite ever? Does that even matter? I don’t know, but even in coming up with this post I don’t think I’ve found an answer to that. Do you have an era of your life that your favorite movies come from?

Later Movies – the Ones I Can Choose

As you move past that college era, you reach an era when I was working and had my own home to fill with movies and the movies that came from this. Some of it is that I have worked over the years to collect movies, to collect the others I’ve mentioned here so that I have them to watch again… but many of them I don’t, necessarily, rewatch a bunch. I just feel happy to have them. And now, with the Geek Baby, I feel that I can share them and pass them on to the next generation. I’m back at the top.

However, there are movies that have come out since – movies that I chose to see, chose to buy, and can now, freedom of an adult, choose to watch again. Some that come to mind, and that I could watch at any time, include Scott Pilgrim vs. The World, Sucker Punch, and The Incredibles. I name these three in particular because they all do something else: they’re all meta-commentaries or explorations of the comic book medium and super hero genre. I would also say that, for re-watchability like that, music is a huge element: so you could probably add a movie like Reloaded as well as Guardians of the Galaxy, so hey, a Marvel movie finally hits the mix…

So while I love comics (enough to be working on one myself), and have seen a ton of the comic adaptations in the last fifteen years, and write about them a bunch and defend them and whatever else… can I name a favorite comic book adaptation? 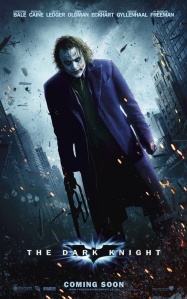 Even within individual franchises… I’m having trouble thinking of favorites. One of our earliest podcasts was in fact us rating the X-Men franchise, and it wasn’t easy, and didn’t come out how I might have done it on my own – X-2 is still near and dear to my heart. So while I defended Winter Soldier, is it my favorite MCU movie? Maybe, but it would have to contend with movies like The Avengers, Guardians of the Galaxy, and Civil War. And future movies as yet unseen! But here’s the thing: while there’s not one monolithic movie that stands out, as a whole, I’m still completely enjoying the experience. And that’s okay too.

Maybe the right answer is The Dark Knight, since it also stands as a commentary or exemplar of the whole genre. That eternal debate about whether things would be better – crime would be normal – if you didn’t have those darned superheroes. If their presence creates the problems they are needed to stop. A question you can keep asking yourself throughout, say, the MCU.

Alright, that’s what I’ve got. What do you think? Can you break down the different eras of movies you love? I’d be curious to know – and to know whether you can easily and decisively name a favorite!

5 responses to “Do Favorite Movies Come In Waves?”