One of my favorite comic runs I’ve ever read was Jonathan Hickman’s Avengers and New Avengers, which crossed over excellently in the “Infinity” storyline. I did a lot of blogging about Infinity, and you can read post like these before, during, and after posts. Or you could just go back to the beginning, which I now understand to be Fantastic Four…

Meanwhile, one of Marvel’s most amusing and interesting ongoing series is What If? where they explore the question in terms of their different characters or storylines. So when I saw that they had done several comics regarding Infinity, I had to give it a look. There are five them, each asking “what if?” in terms of a different outcome of Infinity.

And yes, Hickman wrote a story with a lot of possibilities, a lot of points of failure. A lot of possible what-ifs. However, if I were to take this comic set as a whole, I would say that they just weren’t as good as Hickman’s original – or his alternatives. Part of what was great about his comics was the existence of alternate realities, and all sorts of exploration of what the characters and world would be in different configurations. In all the possible configurations…

And that’s what I didn’t like in the What If? series. Because really, all of these possible worlds exist within the main continuity as well – and they’re all crashing to an end. But there’s no mention of that in these what-ifs, not really… but that was the whole point of Infinity. That’s what was going wrong, that’s what drove the plot. If I were to write a What If? of Infinity, the focus would definitely be with the incursions. But alas… here’s the stories they did go with!

What If? Infinity: Inhumans

What If? Infinity – Inhumans

One of the big things to come out of Infinity and impact the whole Marvel Universe was the increase in Inhumans, caused during the events of the comics. That explosion of new super-powered people included Ms. Marvel – so that worked out alright!

In this alternate world, Thanos takes over, and suffers the Inhumans to live – and not a whole lot else. It’s not a pretty world, by any means. And of course, Black Bolt has secrets! It’s what you do when you don’t talk, apparently.

What If? Infinity: Guardians of the Galaxy

What If? Infinity – Guardians of the Galaxy

This one really pretty much just reads as Rocket Raccoon telling stories. When he tells the stories, he and the Guardians of the Galaxy save the day and stop Thanos. This one might actually be most worth the read, because Rocket is just so amusing.

No relation, really, to Infinity, though. Moving along.

What If? Infinity: Dark Reign

What If? Infinity – Dark Reign

“Dark Reign” was a Marvel crossover that I missed, but the premise is pretty simple: the bad guys become legitimate and the good guys are on the run. And the top architect of that story was Norman Osborn, the Green Goblin.

So what they mash-up here is that while he was at the reigns of power, Osborn got information such that he found out that the Illuminati – good guys – had the Infinity Gauntlet. So he gets it. And like any bad guy who gets it, it’s too much for him and it all spirals out of control. The end.

More to do, really, with Dark Reign than Infinity…

What If? Infinity: X-Men

What If? Infinity – X-Men

When the Avengers leave Earth to go fight in an intergalactic war, they don’t leave behind a whole lot of heroes – thus why Thanos attacks. So these last two have the most to do, overall, with the Infinity plot. First up is the X-Men what-if, as the X-Men are one of the few groups of heroes still around. And they’re splintered and fighting… this comic shows us a group that basically comes from the Jean Grey School. And they are the last survivors of Earth – traveling space and scavenging. Because the Avengers lost the war, and Earth was destroyed.

A group of Avengers shows up, one of the Quinjets that had headed out… but something is off… it’s Supergiant! Thanos’ telepath. She is controlling their minds, but she is defeated, yay! Now there’s two ships worth of superpowered humans left… and that’s about it. Still a pretty bleak science fiction scenario… 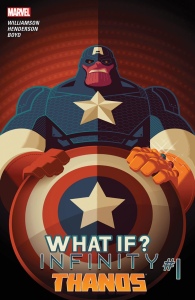 What If? Infinity: Thanos

What If? Infinity – Thanos

And last, the most interesting of the What If? comics. In this one, rather than attacking the Earth, Thanos is summoned to help fight the Builders and be involved in the space plot. The whole two-front war of Infinity becomes one front, and with the addition of Thanos and his generals and armies, they pull way ahead in the war and win handily.

However, Thanos is helping because one of his children is with the Builders – finding his selfish motivations, Captain America stands up to him, but is defeated. And Thanos takes his place… the new Captain America.

The end of the comic is the sort of thing I wanted from all of these comics: Thanos shows up to the Illuminati, offering his assistance in fighting off Incursions. This one does the most to deal with the main plot(s) of Infinity, and was the most rewarding. I guess by dealing with all of it in one go, that left the other comics to explore more random ideas. Ah well. At least I got this one!