The Rise of Voltron: Reactions and Recap Part II

This is the second in a three-part recap/reaction to Voltron: Legendary Defender Episode One — the Rise of Voltron. I broke off last time about 24 minutes in when the team had just landed in front of the Castle of Lions.

I don’t know why but seeing and hearing the sequence where the group exited through the ramp in Blue Lion’s mouth brought on a rush of nostalgia. I had to rewind that a couple of times. 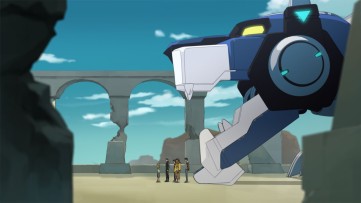 Once the team is on the ground, Blue Lion lets out a huge (awesome) roar that opens the castle doors.  It’s unclear whether Big Blue was programmed to do this or whether the lions possess a degree of sentience.  There’s a definite mystical undertone to this iteration of Voltron.  Defenders of the Universe had one as well, but it wasn’t as subtly drawn or woven as deeply into the interactions that the characters had with the technology. I find that interplay fascinating.  Now that I think about it, Voltron is probably where I got my fondness  for that particular trope in science fantasy–“ancient technology holds a spirit and bonds with its operator.”

The next few minutes have the group wandering into the Castle of Lions, getting scanned by an active AI which appears to have control of the internal systems but not much personality. The hallways are fantastically spooky and deserted. I wanted something scary to happen, but they just find their way to a highly futuristic looking room that we are led to surmise is Castle Control.

A stasis pod rises from the floor with a sillhoute inside that had to be Coran.  I was literally chair hopping because I loved the old Coran and was eager to see what this series did with him.  I expected him to be woken first, but the writers take an interesting tack here and bring up a second pod–Princess Allura.  The princess wakes first, setting the tone for her role and relationship with the rest of the group.  She’s clearly been asleep for a long time and is taken aback by the strangers’ presence (not the mention that they have Blue Lion) but she still handles herself with an air of authority and command, pretty different from the Allura I remember.  The original Allura tried to assert authority but was often thwarted by both Nanny and Coran, who wanted to “protect” her more than they were willing to obey her as sovereign.

Allura’s entrance was superbly handled–although I will say I was slightly weirded out that it was Lance rather than Keith who stepped up to catch her when she fell out of the pod.   WTF is that?

The rest of the scene was a trainwreck.  I HATE Coran, and I’m planning to skim or ignore anything to do with his character.

And as much as Nanny annoyed me, I’m disappointed to find she isn’t present here.   She was a strong influence in Allura’s life, and her role wasn’t always as an obstacle to Allura participating in the Voltron Force.

We learn that Allura and Coran have been asleep for 10,000 years and that their home planet–Altea–has been destroyed.  This is a big departure from the previous Voltron mythos where most of the action took place on Allura’s home planet.  I really like this development, because it instantly raises the stakes, demonstrates the level of Zarkon’s power and bloodthirstiness, and sets the stage for Allura to have a tremendous growth arc that wouldn’t have been possible in Defenders. It also reminds me a lot of Princess Leia, so you can bet I’ll be coming back to this topic look at the effect of the loss of culture and confrontation with genocide.

Next is a short but incredibly intriguing scene with the villains. Haggar makes her first appearance, and is pretty much the most awesome thing I’ve seen with the Galra thus far. Then again, I’ve always been more interested in her than in Zarkon, so I may be biased. The discussion she has with Zarkon implies that they feel some sort of ownership claim on Voltron, and they discuss “taking him back” from the Alteans.

I want to know more about this, but the scene shifts to Zarkon ordering one of his henchmen to take a battle fleet and capture the rest of Lions.  Getting a bit ahead of myself, I feel like the writers aren’t spending enough development time on the Galra.  They throw us these breadcrumbs every now and then, but the majority of the screen time is on the cadets and Allura.  These writers are either really good at stringing an audience along through a story arc or they’re incredibly bad about placing reveals.  I haven’t decided.

Anyway, back at the  Castle, there’s a really cool-looking tech display and an exposition montage that covers the mystical bond that the Lions have with their pilots/paladins.

The salient points: Black Lion is decisive and needs to be piloted by a leader. Red Lion is faster, more agile, and more temperamental than the others.  Red is the most difficult of the lions to “master,” so naturally, Keith is named the Red Paladin.

I know that there’s a segment of old-school Voltron fans who are really upset about this development. The sentiment is that Black Lion “belongs” to Keith since he’s traditionally been the team leader.

I don’t have a problem with the way the series is handling this issue. It’s pretty obvious that Keith is being matured and groomed to take on the leadership role.  The fact that Red Lion presents the biggest challenge and that Keith is chosen to pilot him is a dead giveaway that, sooner or later, Keith is going to end up leading this team. There are several other points in the series when it seems obvious that Keith’s going to be in the commander’s chair before long, but I won’t belabor the point.

There’s something else that DOES bother me here, though:

Allura’s automatic assumption that the cadets are going to pilot her incredibly powerful fleet of magic robots. The setup makes it very difficult for them to object or refuse. There’s a Galra ship headed their way, they’re trapped on the far side of wormhole with no apparent way to leave, and if they don’t help, Allura and Coran will be captured. Even so, they’re never asked if they want to pilot the lions or given any kind of agency. In fact, the only person who seems to have any agency or power in the whole dynamic is Allura.  She decides what they’re going to do, she knows where the lions are located, her magic is the key to retrieving them.  THEN she decides which person will pilot each lion and sends them on a retrieval mission.

The pilots seem okay with this.  No one objects.  But they’re not given a choice.  Typically, in a scene like this, when someone is being asked to risk their lives, there’s an exchange of dialogue like:

“Person in power–This a dangerous undertaking and I realize this isn’t your fight.  The choice is yours.  If you don’t want to help us, here’s an out that will get you to safety.  No one will think less of you.”

EVERYONE knows that the outcome of this dialogue is a given. No honorable hero is going to refuse at this point in the game. So, the exchange is mostly a formality, but it’s an important formality. It’s a show of respect for the heroes’intrinsic value and autonomy, and it gives the heroes the ultimate responsibility for the next set of events.  Here the characters are just carried along.  The story happens to them, and their willingness is implied, but they don’t choose to be part of Voltron.

I don’t know, maybe we’re just supposed to figure WHY WOULDN’T THEY WANT TO FLY THE GIANT ROBOT.  I mean, they were training as space explorers, so there’s an assumed interest in having high-tech ships. In real life, this is probably what would happen.  The scene moves fast; it’s an emergency situation, and leaders like Allura often just give orders and expect them to be followed. It bothers me because there’s a level of commitment involved when you start talking about mystical bonds and robots having personalities that mesh with their pilots.  Besides, it’s not “real life.” In a story, whether or not the people who are about to put themselves in mortal peril a have choice says something about the leaders. 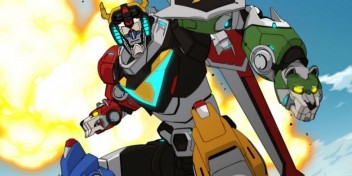 Who could say no to the giant robot?

The subject does come up later. There’s an argument about whether the team should stay on Arus and fight Sendak or take the working lions and “live to fight another day.” That made me more uncomfortable because, again, there’s no discussion about whether the cadets are ready/willing/capable of fighting the Galra.  There are the episodes where the characters talk about not really knowing what they were getting into or “not owing” Allura their loyalty, but I feel like the scenes and the emotions attached them aren’t given the weight they deserve for characters who’ve literally been sucked into a galactic war.

Once the paladins are given responsibility for their respective Lions without being asked, however, retrieval of the Lions goes roughly as I expected. Green Lion is mostly an internal battle for Pidge.  Finding Yellow Lion involves a dogfight with  the Galra and Red Lion can’t be found.  Ultimately Red is located on–Dun dun dun–the Galra battleship that is NOW ORBITING THE PLANET!

Tune in next week to see how this plays out.  Or, you know, you could just hop over to Netflix and watch The Rise of Voltron there.

One response to “The Rise of Voltron: Reactions and Recap Part II”